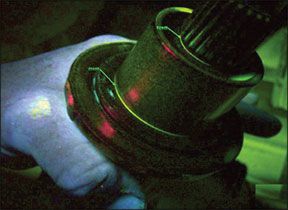 During slow-flight maneuvers, the instructor noticed the green, landing gear “safe” light was not illuminated. The student observed the left gear was hanging out-and swinging. The gear was cycled, but the left main remained free and disconnected. The instructor elected to retract the right and nose gears and land gear-up.

Maintenance found the left gear pivot had sheared at the spline shaft. The right gear was removed and Zyglo checked. Close inspection found the right pivot was cracked three-quarters of the circumference around the spline shaft, nearing complete failure. Gear pivot p/n: 22411143.

The pilot reported substantial power loss from the left engine just after takeoff, and that the left low-pressure fuel boost pump light was illuminated. A technician could not find any problems with the engine during run-up other than the electric,

low-pressure fuel boost pump (intended for flight above 15,000 feet MSL) not supplying rated pressure. After a second takeoff attempt revealed a similar power loss, the pump was removed, revealing the bypass valve assembly had dislodged from the pump body and acted as a flow restrictor. Parker Hannifin p/n 2B6-64. Time since overhaul: 2098.4 hours.

A Cessna 310s left engine exhibited low oil pressure. A significant amount of metal was found in the oil filter. The engine torn down and chunks of piston skirting was found in the oil pan. The number 2 piston had come apart at the skirting around the bottom ring-land below the piston pin, and the number 1 piston was found to be cracked in the same area where piston 2 was broken. A possible contributing factor may have been starting the engine at a temperature near 0 degrees F. Piston p/n: AEC648029.