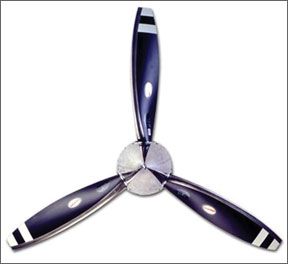 New deice boots were installed on all three blades of this Hartzell propeller, which later was mounted by the owners mechanic. One of the three boots came off after approximately seven hours of flying, resulting in a dent on the aircraft fuselage.

When installing a new boot on the propeller, we observed the adhesive did not separate from the blade. The boots on this propeller are long strap boots. If properly positioned during spinner installation, it remains contained within the spinner. Since the two remaining boots remained attached, it is likely the boot strap was not positioned properly during spinner installation, resulting in the boot separating from the blade. Goodrich p/n 4E1188-3.

The wing was previously repaired using the Superflight System II recovering process as outlined in their manual. During flight the fabric patch came off; the aircraft was landed with some difficulty.

To prevent any future problems with this aircraft, the repair to the wing will be

made by applying new fabric to the entire upper surface of the wing and overlapping the fabric around the leading edge. Additionally, pinked-edged tapes will be used in place of the straight-edged tapes of the older repair and installation.

During a routine inspection, a bulkhead (p/n 1221062-8) was found cracked. One of two additional Cardinals that happened to be in the shop had a similar crack. This bulkhead is the attach structure for the right wings lower attach angle for the inboard flap drive bell crank.

The factory installed a bracket in this position in the l/h wing. There are even some pilot holes in the rib and a heavy attach angle on the affected r/h side. Is it possible the factory assembly line neglected to install an intended similar reinforcement in the right wing?

Upon removing the rear wing attach fitting (p/n 62448-003) severe pitting was noted just inboard of the 5/16-inch wing attach bolt hole on the rear side of the fitting. This area is exposed to outside air and moisture, and is difficult to inspect. This area is also more critical with respect to eventual failure than the front surface, which is visible from the inside of the fuselage. I recommend cleaning dirt out of this area and inspecting with a good light.