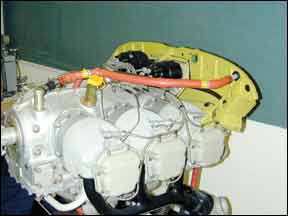 A 1.5-inch long crack was discovered in the forward firewall doubler (p/n 0753600-24). The crack was located on the lower left quadrant of the doubler, and was centered around the top rivet attaching the parking brake control bracket to the

When the parking brake handle is pulled, this area of the firewall and doubler flex. The submitter suggests it is very probable that this flexing action has caused this crack.

While performing the in-range checklist, the right engine quit. The crew managed to restore power, but the engine quit again after landing. Inspection revealed fuel flow and idle mixture settings were out of limits. After adjusting both high fuel flow and idle mixture settings, and a satisfactory ground check, the aircraft was released back into service.

Failure to Reset After Test

During bench testing, the ELT (p/n 453-6603, s/n 14668) would not turn off or reset. Internal battery had to be unplugged to prevent repeated transmission. The ELT was returned to the manufacturer, which indicated the problem could not be duplicated and returned the ELT. Upon receipt, another test was initiated. Once again, the ELT would not reset after testing its G switch. The ELT has been sent back to the manufacturer again.

Engine installed in Cessna 182L failed while in cruise flight. Inspection revealed the case was cracked above the number five cylinder; the number five piston was completely destroyed. This engine was last overhauled 17 years earlier.

Probable contributing causes for the failure include the age of the part combined with operating on auto fuel for an unknown amount of time. Compliance with the manufacturers recommended overhaul time and procedures could help prevent this type of failure.