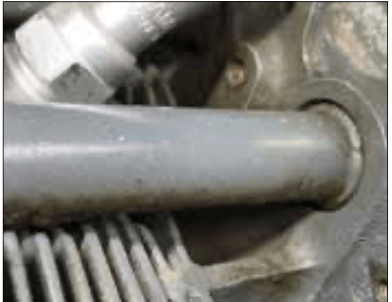 The #3 cylinder exhaust valve pushrod broke due to a valve stuck in the closed position. No marks were seen on the top of the piston through a borescope. The lifter came apart as a result of the broken pushrod but appears to have been operating properly previously.

Due to a failed compression check on the #2 cylinder, a defective rocker arm and pushrod were discovered. All rocker arms and pushrods were subsequently inspected and excessive wear found. Defects appear to be due to oil starvation.

Pilot reported the left engine running rough in flight and oil pressure at zero. Inspection found metal contamination in oil filter, #4 cylinder intake push rod broken and a large gap at the exhaust rocker arm. The engine was replaced and sent to the manufacturer for analysis.

Customer reported trace metal in oil filter. Cylinders were removed from engine, and extreme wear was found on the pushrod ends and the rocker arm sockets. This wear seems to be a design flaw on Lycoming’s new-style roller tappet engines. It appears that not enough oil is reaching the top of the cylinders and the rocker arms.

A few miles from the airport, the #2 engine began to run rough; the pilot performed a precautionary shutdown. Inspection revealed the #6 cylinder intake tube and pushrod were bent. While attempting to change the cylinder, it was determined to be damaged to the point of not being able to be removed from the crankcase. The #4 cylinder was removed and borescope inspection found a #6 connecting rod failure and internal damage.