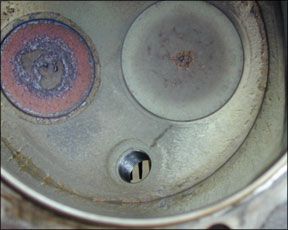 The first instance was discovered as a result of engine

roughness during a pre-takeoff engine run-up: The l/h magneto was not firing properly and, upon inspection, the distributor gear (p/n: 10-357586) was found to be missing approximately ten teeth. The second instance was discovered during a routine 500-hour inspection. There was no pre-inspection indication of a problem with the magneto.

During an annual inspection, a crack running from the fuel injection nozzle port toward the spark plug port on the number five cylinder (p/n 655932) was discovered.

A technician removed the number six cylinder. While inspecting associated components, spalling was found on the number five exhaust lifter (p/n 653888) and on the numbers five and six intake lifters, causing damage to the camshaft lobes.

During an annual inspection of a Piper PA-46-350P, the left turbocharger mounting bracket (p/n 07A19870) was found broken in two places. The submitter speculates the cause was a combination of heat and vibration.

A technician working on a Piper PA-31-310 with Lycoming TIO-540-J2B engines reports at least two, and possibly three, engine-driven fuel pump failures. Each pump failed as a result of a sheared drive shaft.