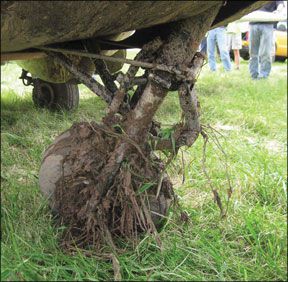 Upon opening the instrument air, pressure regulator and manifold check valve assembly for inspection, heavy corrosion of the ferrous components were noted.

Large rust particles were contaminating instruments. The submitter recommends Beechcraft develop a service bulletin or kit installing an inline filter after the instrument air regulator but before the instruments.

The landing light switch (p/n 35-380132103) was hot and emitting smoke. The switch was installed under AD 2008-13-17. In a 10-month period, a fleet of 12 aircraft has required 21 replacement switches, limited to the landing and taxi light circuits. Fortunately, all except this one have failed in the open condition with no indication of smoke or burning. All switches opened for inspection failed where the copper braid from the points is attached to the switch frame.

During touchdown, the nose landing gear failed and partially collapsed upon contact with the runway. The aircraft veered sharply left and (moved) off the runway, across the grass, onto and across the left taxiway (and its grass) and into a ravine where it came to rest.

It appears the nose gear linkage bearing rod-end (p/n 198001-2) to the gear extension assembly experienced a fatigue failure. The rod-end failed at a point where its threads and nut meet, shearing even with the nut face (AN316-4R). The threads were stretched and bent at a 15-degree angle with about -inch of thread showing.

A loose injector line (p/n 646421) was discovered on this SR22 while other work was performed. When the line was removed, approximately one inch of the tubing had been worn away to half its thickness and was leaking fuel over the top of the engine. Two other injector lines on this engine were damaged by ignition leads.

The first of two failed oil coolers (p/n 8000074) was overhauled and installed on a factory rebuilt, zero-time Lycoming O-540 engine. It failed after 23.6 hours. The second (new) oil cooler failed after 53 hours.