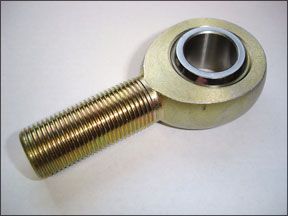 The engine died on final approach to the airport. The pilot pumped the throttle and the engine started running. When the pilot retarded the throttle the engine again died. The pilot could not get the engine to restart on the ground. Then engine was started the next day showing a fuel flow of 11 to 12 gallons per hour at idle. The carburetor was removed and one pontoon of the plastic float was found 90 percent full of fuel.

The l/h side steering rods ball-end broke after 215.92 hours time since new (p/n

On landing rollout, this plane began to drift to the left-the l/h rudder pedal was disconnected from the nose gear-it would not respond. As the pilot applied brakes the aircraft continued its left drift off the runway, then the nose gear collapsed.

Cessna has no time life on the hollow rods; Beechcraft also uses them, but with an estimated life-span of 2000 hours in service before replacement is recommended.

The nosegear would not lock down because of a broken rod end (p/n ADNE5-323) on the retract rod. This rod end connects the retract rod to the aft nosegear drag brace. This defect resulted in a nosegear-up landing.

During maintenance run-up and taxi check (after maintenance) the left rudder torque tube broke off (p/n 2223900). It appeared to have been cracked for some time prior to failing during taxi. It is suggested the area be cleaned and inspected with a 10X magnifying glass. A borescope with a side view end could also be inserted in the tube to inspect it from the inside. If this had happened during landing and had broken at initial brake application, the aircraft would probably have departed the runway.