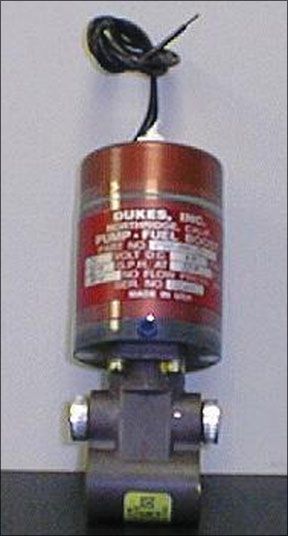 Before the next students flight, the electric fuel pump (Dukes p/n 5100-00-20 installed on a Lycoming O360A4M) was found inoperative. Inadequate cooling is believed to be the source of the malfunction. The submitter suggests providing ram air for proper cooling of the fuel pump and motor.

Nine pumps installed on four identical aircraft were discovered failed. Time in service ranged from 102.3 hours to 593.2 hours and averaged 317.2 hours since overhaul.

During a 100-hour inspection, the #2 cylinders exhaust stack was found pulled down approximately 1/16 inch. Further investigation found the number 1, 3, 5 and 6 engine cylinder exhaust stacks also pulled down, but not as much. When the cylinder was removed, the lower forward, -inch stud nut was found undertorqued and the forward two studs were below recommended torque. New, oversized studs (0.003″) were installed per Lycomings recommendations.

After installing a new #2 cylinder and new exhaust crossover pipe, tightening the exhaust flange nuts does not stop exhaust leakage on all studs; on some, the nut bottoms out on the threads. After tightening, the previously affected exhaust flange areas have come loose again after 50 hours time in service. Exhaust assembly p/n: 40B222318.