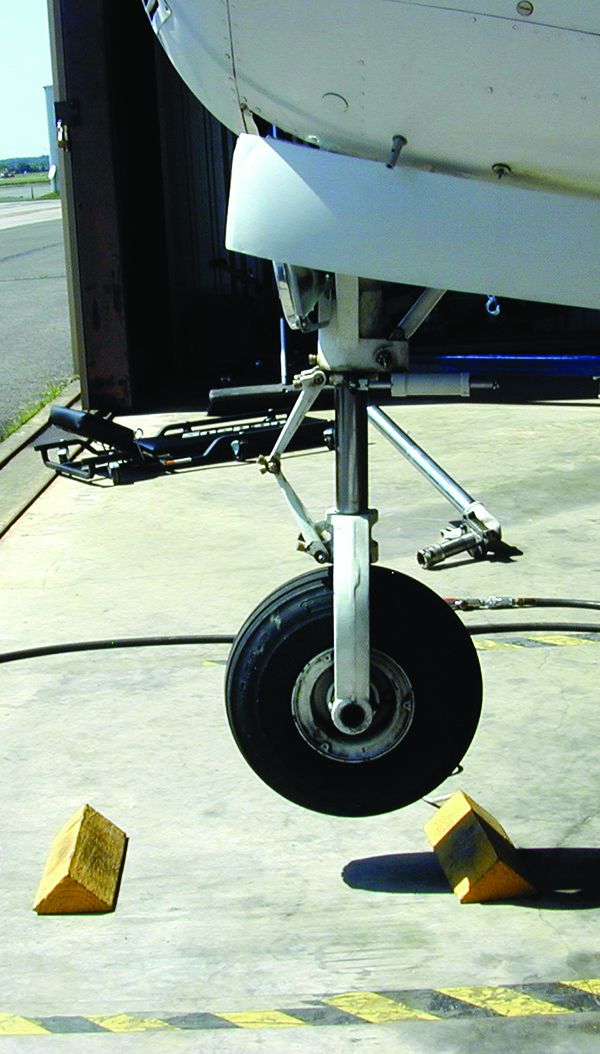 During routine inspection, hydraulic fluid residue was discovered inside the top of left the main gear oleo strut. Investigation revealed the hydraulic fluid could only come from the strut. The assembly was removed for troubleshooting and top of oleo strut (p/n E75N12643) was found cracked, allowing the hydraulic fluid to seep out. If left unattended, the strut could collapse and cause a ground loop. Assembly will be replaced with a rebuilt unit.

During a routine inspection, the nose gear oleo strut was disassembled for replacement of O-rings. The technician found the inner strut tube’s retaining pins at the top were damaged, allowing lower part of tube to be worked loose from upper part. The only way to find this type of damage is to completely disassemble the nose strut.

An actuator rod end fits between two tabs on the main landing gear strut assembly. On inspection, one of those tabs was found completely broken off. Where the tab broke off on the strut assembly, there was half shiny metal and half dirty metal, which usually means it had been cracked for a while before it broke.

Aircraft was flown for 45 hours on snow skis before the right main landing gear strut broke during low-speed taxi. The shock strut broke halfway down the tube, with no signs of previous cracking. Break occurred during compression of the shock strut (p/n 3056200) due to high side loads from heavy snow and ice.

After landing, the upper link attach point failed on the main landing gear strut cylinder, p/n 65319-002. This failure caused the oleo strut to be ejected from the cylinder, causing major damage to the aircraft. SB 1311 addresses this issue.