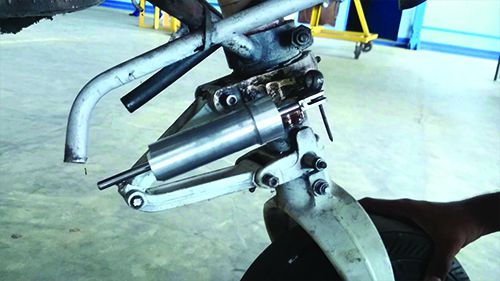 Pilot reported severe vibration during the takeoff roll and aborted. Troubleshooting and inspection of main landing gear mounting points and engine mounting collar with no discrepancies found. Found the nose tire out of round and a faulty shimmy dampener. Nose tire assembly was repaired and the shimmy dampener replaced under K208-164A.

Shimmy dampener would not pass test per component maintenance manual; internals were jammed. Upon teardown, inspection revealed several missing parts within unit. Due to missing parts, the orifice was jammed sideways. Also, an incorrect roll pin retainer was installed instead of a solid pin.

Bent shimmy dampener rod (p/n 01500100) caused nosewheel to jam to its maximum right deflection. When the landing gear was retracted, misalignment of the aligner assembly and the guide bracket occurred. Gear selection up or down was affected and resulted in an emergency landing with an unlocked nose-down configuration.

After takeoff, when retracting the gear, the nose gear did not fully retract. Crew cycled gear back to the extended position and returned to base. Examination revealed the shimmy dampener rod end broke, causing nose gear to jam in wheel well. Removed and replaced component and nose gear assembly.

During a pre-flight walk-around inspection, the student pilot noted the shimmy dampener (p/n 6801400) was at an awkward angle. Examination revealed the shaft was broken next to the rod end. No other visible damage was evident. The part was replaced.