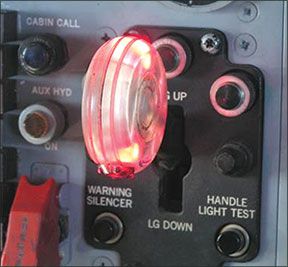 Piper PA-44-180 Seminole
Failed Nose Gear Actuator
After takeoff, landing gear was retracted. Immediately after gear-up indication, a gear warning was indicated. After landing it was found that the rod end (p/n 452729) bearing in the nose gear actuator had broken, allowing the nose gear to extend and return to a down-and-locked position.
Part Total Time 7541 hours

TCM IO-550-N
Failed Starter Adapter
When turning the prop during a compression test, the technician noticed a clunking and ticking noise, which was traced to the starter adapter in the Cirrus SR22. Removed adapter and found the bearing on the drive shaft that goes into the engine is very rough and jerky. This is the second occurrence of this issue on two different aircraft, both with very low time on their starter adapters (p/n 642085A17).
Part Total Time: 60 hours

Slick 6320 Magneto
Failed Points Assembly
The engine, installed in a Lancair IV-P Experimental, began to run poorly. On inspection, the left magneto was found inoperative. The magneto was removed, disassembled and inspected. The follower arm had separated and was laying in the top of the magneto. The right magneto was removed for inspection, and corrosion was seen on the follower arm in the area where the stiffener section stops.
Part Total Time: 176 hours