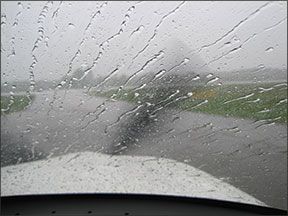 I just had to comment on Tom Turner’s recent article, “Departure Difficulties,” in December’s issue. It’s perhaps one of the best and thought-provoking articles I have ever read in your magazine

As a 4000-hour instrument-rated pilot of a Baron, I frequently fly heavy weather in exactly the conditions he described. I can always plan for a timely departure—well rested and prepared—but I am not so sure I can always make the same claim on the return flight. This article has given me a renewed focus on where the risks really lie on LIFR departures.

I doubt I will stop doing them, but I surely will maintain focus on better preparing for these kinds of flights when they arise.

Glad we could help!

Cheap ATP, REDUX
In reading your December editorial, “The ATP, Going Cheap,” I agree that an “ATP isn’t worth much without a multi-engine airplane rating.” However, in the next paragraph you mention “even if you never plan to fly for a commercial operator,” it might be worthwhile to get the ATP certificate. That sounds like a bit of a contradiction.
I suggest that instrument-rated commercial pilots who also meet the hour requirements should consider getting a single-engine airplane ATP, if nothing else for proficiency and bragging rights. It is basically a comprehensive instrument checkride; the challenge is the knowledge test.

On a separate but related note, once one earns a single-engine airplane ATP, the new rules don’t make sense if one wants to add a multi-engine airplane ATP later. FAR 61.165(f) states the requirements for adding an ATP ME class rating to a SE ATP certificate. However there is a problem: “61.165(f)(2) After July 31, 2014, pass a required knowledge test on the aeronautical knowledge areas of FAR 61.155(c), as applicable to multiengine airplanes….”

The additional training required by FAR 61.156 is designed to help prevent the kinds of pilot errors identified in the Air France Flight 447 and Colgan Air Flight 3407 accidents. Such training must be accomplished and a graduation certificate from an authorized provider presented when applying for the ATP multi-engine airplane knowledge exam after July 31, 2014.

But here’s the catch, confirmed by the FAA: If an applicant for an initial multi-engine airplane ATP passes one of the existing knowledge tests before July 31, 2014, and earns the certificate before the results expire in two years, the additional training specified under FAR 61.156 is not required. No one ever said the FARs weren’t nuanced.

Missed Opportunity?
I’ve really enjoyed reading Mike Hart’s articles in the last few issues, but I feel like his article “Embracing Risk,” in December’s issue, was something of a missed opportunity. I would have liked to see a much larger discussion on “expanding the envelope” of one’s experience. This is a big area where new pilots are given few practical tips and lots of Annoying Aviation Adages (“better to be on the ground wishing you were in the air” and so on).

I practice, and teach, the concept of consciously expanding your envelope in one axis at a time. Perform the usual risk assessment using PAVE. Go into detail, looking at all aspects in particular of the aircraft (make/model familiarity, avionics, state of repair, etc.) and environment (day/night, weather, departure/destination areas).

If one of these aspects gives you pause, you may consciously accept the added risk and go for it. For example, if you aren’t fully comfortable at night but your departure and destination are familiar, the weather is good and the aircraft is one you are comfortable with, bring your A-game and do the flight. If you’re going somewhere unfamiliar, or mountainous, or small, or if the forecast is iffy, or if your favorite rental isn’t available and you’re taking one with a different GPS, stay home. If two aspects make you only very slightly nervous, accept the added risk and try it. The idea is to allow yourself to grow as a pilot while keeping the unfamiliar variables to a minimum.

Best Glide
Dr. Cavagnaro’s excellent article, “Stop The Prop?” in January’s issue is the best explanation I’ve seen of the difference between minimum sink speed (VMS) and best glide speed (VBG). In the example, the highest point on her polar shows a sink rate of five knots (500 fpm). So when the engine stops, she is flying a glider with a 12:1 glide ratio. Flying at VMS only determines the longest time you can fly for a given height above the ground.
The data show that flying at VBG results in covering greater distance during the glide than flying at VMS (unless the air is rising), and much greater distance in a headwind. Your job with no engine is to find a place to land safely. You know roughly what the wind is at your altitude. If you turn downwind and fly close to VMS, you have more time to pick a good spot. Heading upwind requires you to lower the nose and “penetrate,” giving you fewer choices.

Always be aware of the wind around you and the terrain under you. Maximize your choices.