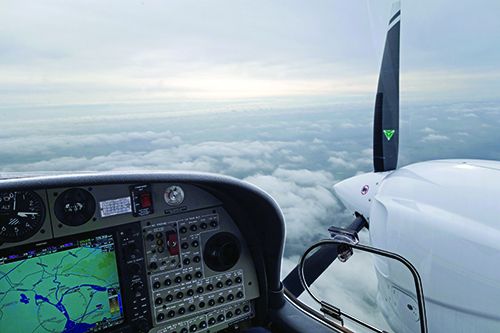 Thank you for an informative and (in my opinion) long overdue article on VMC and its associated hazards in light twin-engine aircraft (“Is VMC Fixed Or Variable?” August 2020).

The closest I have come to my demise in my 47 years of flying occurred many years ago in a light twin (Beech Baron). As a young pilot with a relatively recent multi-engine rating, I had been given the usual training as described in your article. The rule to not turn toward the dead engine promised “loss of directional control” as its consequence. As an engineer by training, that seemed somewhat vague, but what were the chances that it would become an issue?

Thanks largely to recent aerobatic instruction, I was able to cut the remaining engine and barely complete the snap roll to land the aircraft. Your article is the first time in all these years that I have read a coherent explanation of what happened that night. Hopefully the training has improved since then.

Thanks for your kind words on this article. During our initial multi-engine training, in an original Piper Seneca, we experienced something similar under the hood while holding in turbulent conditions with the right engine “failed,” pretty much a worst-case scenario.

After crossing the holding fix and gently rolling into a right turn, a gust lifted the lift wing well beyond standard rate. The only way to recover was to close the throttles, crank in a lot of left aileron and accept the altitude loss. Although we survived, our underwear did not.

CLEARED FOR THE MSA?

Excellent article by Tom Turner on MSAs and their application (“Cleared For The MSA?” July 2020). Of course we always want to be 100-percent legal and safe, but sometimes we tend to overthink what is safe and what is legal. One thing that has served me well in my many years of flying is to not rush a descent and descend lower than I need to be at any given time or position.

If you examine the records, I think you would be shocked at how many CFIT accidents (especially at night or IMC) were ultimately the result of descents made earlier than necessary! Situational awareness applies to the vertical as well as geographical position.

In Tom’s example, so what if you cross IMETY at, say, 4000? You still have five miles to reach 3200 before OVVOD and then another 6.2 miles to reach the 2900-foot crossing altitude at EPPAB. Common sense dictates that, if you choose to stay a bit high early in the approach, speed control will be key. You certainly don’t want to come roaring in at the top of the green arc!

As mentioned, if you don’t understand a clearance, ALWAYS ask for clarification!

Tom Turner is to be commended for his diligence in researching this somewhat obscure terminology.

Tom Turner’s article brought to mind the December 1974 crash of TWA flight 514, as I’m sure it did for others. The Boeing 727 hit Mt. Weather after being diverted to Dulles because of crosswinds at Washington National Airport. After being cleared for the approach, the crew immediately descended to the 1800-foot msl final approach fix altitude, not the minimum en route altitude (MEA). Mt. Weather extends to 1650 feet, but because of high winds and downdrafts, the 727 hit its 70-foot-tall trees. Importantly, the MEA information was tucked into the upper-right corner of the approach plate—easy to miss if you are being vectored to an unplanned alternate.

My squadron had an all-pilots meeting to “remind” us that “cleared for the approach” meant you are cleared to the final approach fix altitude, but not below the MEA. That was news to us. We all believed ATC would not clear us for the approach if there were rocks between us and the FAF altitude. I would have hit Mt. Weather that day.

Great article that clearly communicates a point about which I agree many pilots (including this CFII) were unaware. The brevity and clarity are refreshing and welcome. Additionally, we are reminded that when there exists a sliver of doubt, it is imperative that we ask ATC. The advice to research only authoritative sources and not rely on the self-appointed experts on the internet is also sound advice. Hopefully, we continue to learn every day. Your publication is a significant aid in that endeavor.

According to the sidebar “Reviewing PAVE” on Page 5 of the July 2020 issue, there is no such thing as low-risk flying as offered in the bottom right three panels; the best one can hope for is “medium” risk flying. I say this because engine failure, which would be improbable, is always a risk, and if engine failure occurs, the risk would never be defined as “negligible.” All other categories of severity show risks of improbable likelihoods to be medium and thus my stated conclusion…but I am fine with this assessment of flying risk.

In the scenario you describe—failure of a single’s engine—we would rate the likelihood as “remote” and the severity as “marginal,” with the result of landing in a green square denoting medium risk. There’s no such thing as risk-free flying.

I just subscribed. Reading my first issue in over 20 years. I’m only on page 7 on Robert Wright’s great risk-management piece.

The discussion of the SR22T departing ASE and the resulting CAPS pull is a discussion about ADM/risk management, but the picture that was supposed to show the terrain surrounding ASE is really of a CAPS deployment test in a SF50 over California City in 2017.

Sorry about that. The sidebar was written to accompany the classic image of Cirrus Design’s first test of its CAPS airframe parachute system on an SR20. Somewhere along the line during that issue’s production, probably close to deadline, we decided we were really tired of using that older image and instead substituted a more recent one, depicting the same type of test involving the new Cirrus SF50 Vision Jet. In the rush to meet deadlines, we simply forgot to update the text to reflect the replaced image.