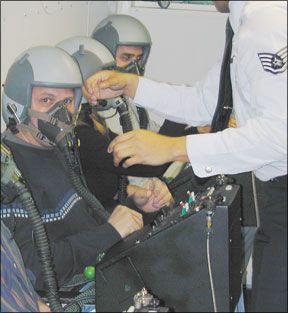 A few years ago, as a relatively low-time private pilot with a brand-new instrument rating, flying a normally aspirated piston single in northern New Mexico, I decided that before I venture into the mountains on my own, I should take a mountain flying course offered by a local CFII. The three-day program was extraordinarily valuable, particularly to a low-time lowlander like myself. One thing we did made a huge impression on me; Id like to pass it along under the general heading of hypoxic stupidity.

After taking off from Telluride, we headed back to Taos “over the ridge,” taking us to approximately 14,000 feet. About the time we actually got that high, the instructor told me to shed the oxygen, start the panel timer and give him reciprocals to headings hed give me. Normally, I can do that in my sleep, and for the first 1 minutes, I complied.

Then, something funny happened. I started having to actually think about it. By 3 minutes, I was reduced to a pencil and tablet. At that point, he said, “Okay, maybe thats too hard. Ill give you two numbers. Tell me the result when you subtract the second from the first.”

By the time 10 minutes had passed since I went off oxygen, my performance on even that simple task was grossly reduced. At that time, I went back on oxygen, we discussed the results of the exercise and I have never forgotten it.

The truly scary thing was, I had no idea my performance was degraded until I simply started having trouble doing the task. There wasnt any warning and, had the task been more obscure, it wouldve been a lot longer before I realized I was having trouble.

Hypoxia is no joke. Its onset is undetectable and, once under its influence, the resulting euphoria can blind you to your inability to perform even the most trivial mental task.

Nowadays, I get on oxygen at about 8000 feet and stay on it until Im safely down to about 5000 feet, particularly at night. Flying in the mountains is tough enough. Why do it when you cant decide whether 10 minus 8 is 2? Its just not worth the risk.

Regarding the excellent “Unusual Recoveries” (June 2007), I would like to relate my near-fatal experience in a Pitts S1S many years ago in hopes that it might save a life.

I entered an inverted spin at about 2500 feet and correctly did the normal recovery procedure of throttle closed, opposite rudder and stick forward. The aircraft recovered quickly but entered an upright spin in the opposite direction as I did not neutralize the controls soon enough. I became disoriented and, after several repeated attempts, I remembered Gene Beggs ideas about letting go of the stick and recovered below 500 feet agl.

Symmetrical airfoil aerobatic aircraft fly very well inverted, and in a spin it is difficult to tell if you are inverted because you are strapped in so tight and the nose is very low in either case.

I understand many Pitts pilots have spun to the ground, and my experience may be typical. Under normal circumstances I believe the NASA standard method is best, but if you become disoriented the Hands Off method could save your life.

It was a mildly busy day for Denver Approach. As I was being vectored to home base, the controller issued a clearance to an outbound United flight. The United

My question: Since I heard the United pilots incorrect readback, and realized the controller missed it, should I have said something?

We dont have a good answer for you in all situations. If the frequency is relatively quiet, saying something might be a good idea. What to say, to whom it should be said and how to say it are other questions. Wed probably keep quiet, though, on the theory we could generate greater confusion.

In the end, the system worked as intended. But wed ask other readers: What would you do when someone clearly misses a readback and the other end doesnt catch it? Email us: aviation_safety@hotmail.com.

Regarding “Bring Cab Fare” (February 2008): Yes, its true the “crosswind component” happens to be the wind blowing the day of the certification flight. But an airplanes published figure begs the question, “What do I do?”

It appears most manufacturers take a ho-hum approach to the whole affair and do not consider it all that important. One manufacturer told me they lost a contract because the agency shopping their aircraft required a demonstrated crosswind component of 17 knots; theirs was only 12 knots. Of course, its possible a manufacturer might have done the flight on a day of very strong crosswinds. They may be within a knot or two of the actual maximum for that aircraft.

Theres no published figure for my aircraft as it was certified before the requirement. What do I do about that? The answer is simple and will take some time to work out. I have to play test pilot, but it is better than stumbling around in the dark.

On windy days, I have to fly down a runway with a 90-degree crosswind, trying to hold a forward slip and maintaining directional control. At the same time, I have to be cognizant of rudder authority and maximum bank angle without dragging a wing tip.

At some point, I will not be able to maintain directional control and this will be the maximum crosswind that I can expect to negotiate. Nevertheless, is it real? Do I really want to try to negotiate a wind at my aircrafts maximum limit? Flight at the aircrafts limits-or mine-means there is no margin. It doesnt matter how skilled the pilot is-physical limits are physical limits.

Also, some things I have to consider are gusts, which can be over the limit. I use the maximum gust and that is my limiting factor. The other thing I must take into consideration is that tower winds are given in magnetic and TAFs are in true north when flight planning.

An airplanes crosswind performance depends on many variables beyond just the winds velocity. Among them are density altitude, weight, speed and, of course, gusts. Technique and runway dimensions can make a difference: Running out of control authority in the flare isnt a big deal if the runway allows approaching at a higher speed, angling into the wind.

Wed guess the main reason manufacturers dont publish a hard number is because it would become a limitation, something pilots disdain and the FAA loves to enforce. See page 30 for more.