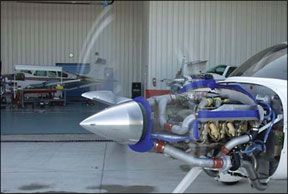 Walter Atkinsons “Top Five Engine Myths” (March 2007) described all of the habits Ive been observing for years and the life-extending advantages in abandoning at least one of them. Before I become a non-believer, however, I would like to poke at one of the arguments.

Atkinson says there is no need for cool-down time for a turbocharger. I own a Turbo Arrow (my second), and have heard the problem is not cool-down time but rather spool-down time. Legend has it the turbine spins at 60,000 to 80,000 rpm and depends on the engine oil pump for its lubrication.

Obviously, when the engine stops, oil pressure goes to zero and, with it, oil flow to turbine bearings. The post-landing moments of meditation are designed to let the turbine spool down so the bearings arent spinning so fast when the oil stops.

Walter Atkinson responds: “The spool-down concern is an oft-heard reason to sit and idle the turbo after landing. As it turns out, the spool-down time is essentially zero. Shutting off the engine stops the turbo very, very quickly.

These exhaust-driven turbos are not at all like a fan jet. We thought about this and looked into it! If you stand next to the cowl and shut the engine down, by the time you could bend over to look at the turbine blades, they already would be stopped. Spool-down time is not a concern.”

A couple of comments regarding the sidebar, “What The FAA Says,” in Marchs “Lurking In The Murk.” I am a relatively new pilot, flying from the Lee Gilmer Memorial Airport (GVL) in Gainesville, Ga., a non-towered facility northeast of Atlanta. We get a lot of jet traffic.

Even on days with relatively low ceilings, there will be two or three planes in the pattern, usually using Runway 29. On the CTAF, well hear, “Hawker on 10-mile final to Runway 4, Gainesville.”

The Hawker has done what the FAA advises: broadcast his position and intentions. If he monitors CTAF, he will hear us extending downwind for quite a long distance or doing 360s over the lake, trying to stay out of the way. The point is its not as simple as the FAA would have us believe.

Some non-towered airports are reasonably active, and the FAA needs to understand their current protocol is not all-inclusive unless everyone changes their plans to accommodate the jet. The authors recommendation to monitor CTAF earlier in the approach is a good step forward.

I found the article “Lurking In The Murk” ironic. For years now I have read all the self-righteous blather (frequently from pilots who are long on wordy “theory” and

short on airmanship) about wordiness in the pattern and the “unprofessional” convention of announcing pattern position at uncontrolled fields by identifying the field both at the beginning and end of the transmission.

I am here to say I have done, and continue to do, exactly that precisely because of what the article discusses. Too many times I have arrived at small non-towered airfields and found myself cut off at some point on the approach by someone who feels that the radio is superfluous. I make certain that people know where I am and what I intend to do.

There is a big difference between yapping away in KIADs airspace and announcing position at a local field. I relate the latter to operations in congested military airspace and I can attest that there is a lot of talking going on between pilots in close-quarter military aviation operations. It is and should be done professionally, but the fact is that it is done.

With the projected costs of a basic ADS-B system, let alone the fact that it is one more box to drag pilots who have more money than stick skills inside the cockpit, it may well be that the best safety measure we all have is our eyeballs, a reliable radio and a willingness to use them.

In the non-towered environment and-especially-when marginal VFR prevails, we should be using all the tools at our disposal to see and avoid conflicting traffic.

You Will Be Assimilated

It appears your editor is not very ATC friendly. As a 24-year ATC veteran, Im certainly embarrassed by the poor service Mr. Burnside has received (Editors Log, December 2006 “…none of your business…”). However, I do believe his was an isolated incident. Most of the controllers I work with put forth their very best effort.

Mr. Burnside states the controllers job is less about control and more about supporting someone moving at 150 knots. I disagree on both points.

First, were called air traffic “controllers” for a reason. We cant just let everybody go haphazardly wherever they want and still provide a margin of safety. Second, if Im so worried about someone moving at 150 knots, should I be twice as worried about someone moving at 300 knots? What about 500 knots? You see, it doesnt matter if youre a 747 or a Cherokee, my responsibility is still the same.

Unfortunately, there is a small percentage of pilots who believe they are the only ones in the system and any of their requests should be granted. While it is true that they are moving and I am not, the fact is that they are only worried about one airplane while Im worried about a dozen. And right now, Im so busy with these five aircraft over here, that I just dont have time for you or your request. I hate to break this to you, but youre not always my priority.

And just so you know, Ive been a pilot longer than Ive been a controller; Im also an aircraft owner. I fly IFR in the system frequently, and while there are those occasions that I dont get the best of service, more often than not, I can get what I want by using a little common sense and tact.

Mr. Burnside, I invite you to come sit with me for a day and truly learn something about the ATC system.

Thank you, Mr. Gardner, for writing-next time Im in the HOU area, Ill definitely look you up.

I wholeheartedly agree-and acknowledged-that incident was isolated. Ive been flying for more than 30 years, and rarely receive poor handling. However, the bad handling has become more frequent, even as my activity has not appreciably changed.

In reality, your job is to separate traffic, provide safety alerts and “provide additional services” to airborne aircraft subject to a variety of considerations, in that order. The growing problem I and many others see is a change in attitude resulting in poor service. I dont know if its laziness, job dissatisfaction, inadequate equipment, a combination of these or other factors. But its there.