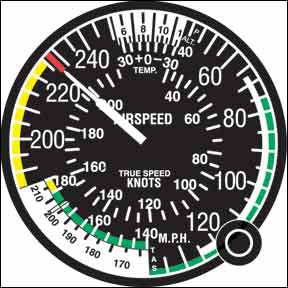 The article “Slow Down, You Move Too Fast” (January 2011) was enlightening. While Mr. Gibbs statements are logical, it would be helpful to have a reference describing this in more detail. Would you please provide a reference that explains the aerodynamic theory or aircraft certification process that substantiates Mr. Gibbs explanation? Although I find Aviation Safety very useful, I cannot use it as a

Please help me understand Steven Gibbs article, “Slow Down, You Move Too Fast,” in Januarys issue. He says categorically, “It is very important to understand VNE is not indicated airspeed. Instead, VNE is a true airspeed.” His statement is unqualified, saying by implication that it applies to all airplanes.

When I first read the article I thought, oh, good, Im going to learn something new. Well, after reading it three times, researching it and discussing it with several other people, Im not there yet.

So far, every type certificate data sheet, the FAAs authoritative statement of what a given airplane is, that Ive ever seen, and by no means have I seen them all, states VNE as IAS. Please note Im not refuting what hes saying. Im ready to learn. But at the moment Im highly skeptical that the author knows what hes talking about and that Aviation Safety has done an adequate fact-check on the article given so much established prior theory, precedence and established training curricula.

The article “Slow Down, You Move Too Fast” on the subject of VNE by Steven Gibb does not match what I have been taught by flight training organizations about my Piper Matrix. Is it possible that Mr. Gibb is generalizing a little too widely?

Although I have seen POHs with a table showing different VNE speeds versus various altitudes over the years, my Matrix POH clearly states that “VNE = 198 KIAS or 200 KCAS,” not KTAS.

While presenting VNE in TAS may be how it was done in the past for some airframes, I see no reason an airframe could not be certified to a IAS limit at its maximum certified altitude, which would then clear the plane for all lesser altitudes at that IAS airspeed.

The preceding three letters are representative of the feedback we received on Stevens article.

Were well aware the vast majority of POH/AFMs and airspeed indicators consider VNE an indicated airspeed. People are flying airplanes higher and faster than many of their designers intended, thanks to more powerful engines, turbonormalizing and other technologies. Going high and fast is big business these days, even in airplanes originally certificated right after WWII.

Meanwhile, there are a number of references-especially involving high-altitude sailplanes and experimental airplanes-in which VNE is considered most accurately expressed as TAS. Some flight manual examples include the LET L23 Super Blanik, which begins to reduce IAS VNE above FL200, and the Schleicher ASK 21, which reduces it for altitudes above 5000 feet.

There are many reasons aircraft are certificated with a never-exceed speed, including the prevention of aerodynamic flutter, which can destroy an airframe in seconds. One of the variables in predicting flutters onset is speed. Another is air density: The thinner the air, the less damping it provides against flutter. Combining high speed and thin air is a recipe for flutter.

Our conclusion is VNE is published as IAS for simplicity; the vast majority of airplanes will never see its TAS equivalent in level flight. But on those occasions when they do, their pilots need to know and consider the implications. When confronted with two different values for VNE, expressed in IAS and TAS, well take the safer one every time.

One of our jobs at Aviation Safety is to stimulate readers into thinking of ways using personal aircraft can be maximized while the risk of doing so can be minimized. Stevens article did just that.