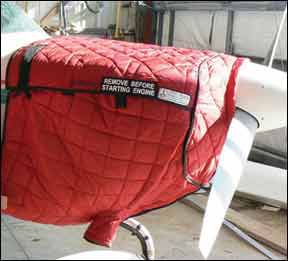 I’ve always enjoyed Tom Turner’s articles through the years. Aviation Safely is a slick magazine with very interesting articles, but I was particularly interested in your winter flying article in the January 2012 edition.

My husband and I have a Tanis heater installed in our 1981 Cessna 182. It works great, especially since the plane is hangared, but the utility blankets are very awkward to secure and tie with rope. Where can we purchase such a nifty cowl cover as shown on page 17 of your article?
Jane Catterton
Via e-mail

Thanks for your kind words! Custom engine blankets are available from pre-heat equipment vendors, like Reiff and Tanis, as well as from cover manufacturers like Kennon and Bruce’s. We strongly recommend using one when pre-heating the engine.

Run-up Frequency?
Your November 2011 cover story on preflight inspections reminded me of a pilot-friend with whom I used to fly (in his airplane). He always did a good preflight and seemed a prudent pilot. However, he only did a run-up after the first engine start of the day. So, for instance, before the flight home after a lunch stop, he would not do a run-up with mag check, etc., before taking off (assuming things seemed otherwise normal), claiming it wasn’t necessary.

Our rule-of-thumb is to do a run-up after every engine start. The rationale we use goes like this: Things can happen during the previous flight we might not always catch. A successful run-up after each engine start helps verify nothing did.

Landing Sight Pictures
I have been an avid reader of Aviation Safety since my student pilot days in 1992. I still love the magazine and find it to be the best and most insightful aviation/pilots magazine available. So please accept my comments as a constructive response to “Five Reasons Your Landings Suck” in the February 2012 issue.

The fact we see five to 10 articles each year in aviation magazines on how to do good landings indicates a long-standing deficiency in training. It is the pre-solo maneuver which should have most of the kinks worked out during that phase of training. Yet, your article is correct: We continue to see landing accidents and incidents as well as just poor landings among many certificated pilots.

So I agree that we have a problem with landings. All the elements in your article are right on. But as is often the case, the over-arching cause of bad landings has been omitted: specific visual references, or sight pictures. This was part of the article, but sight pictures need to be conceptually more specific and include references all the way through touchdown.

Most pilots are pretty good at getting the airplane down into ground effect at some reasonable speed. Once we are there while landing most single-engine tricycle-gear airplanes, we should change our focus from the planned touchdown point—the numbers, for example—to the end of the runway. In a level attitude and with power at idle, we will start to sink, which will be plainly visible with the end of the runway as our visual focal point. Pitch up slightly to bring the top of the cowling so it appears just under the far end of the runway.

After placing the nose just below the far end of the runway in our sight picture, we’ll sink a little more, so re-adjust the pitch attitude to once again “kiss” the end of the runway with the top of the cowling.

The correct pitch attitude easily can be practiced during soft-field takeoffs. When flying different aircraft which don’t have such a good measuring device, such as twins and jets, the reference will be different but the concept is the same.

Additionally, because we are totally focused on the relationship between aircraft and runway, we will instantly see the need for additional aileron and rudder should there be a crosswind. Those pesky crosswind landings become non-issues without much work.

There is one problem that may prevent a pilot from benefiting from this technique. For it to work, the pilot must be flying the airplane by outside attitude reference. This means he or she has been trained to look outside most of the time, and checks the instrument panel only to confirm the attitude and power setting result in the desired climb, descent, level or turning flight.

Many students and certificated pilots alike seem to think the only reason to look outside is to scan for traffic. Nope, traffic avoidance is important, but we look outside to adjust aircraft attitude with respect to the horizon. This skill needs to be practiced throughout the flight in order for it to be available during the very precise process of smoothly arriving at terra firma.

One interesting sidebar here: If a student or a certificated pilot has trouble with landings and the suspicion is he or she is flying the panel and not visual references, try a sustained forward slip. Most pilots I have observed who have these issues are unable to perform a smooth, sustained forward slip down to ground effect.

The reason? Because a slip has to be performed strictly with outside visual feedback, airspeed control notwithstanding. A pilot who has been flying on final using heading, airspeed, VSI and altimeter as primary references to make control inputs will be unable to do a good forward slip.

Thanks for the opportunity to raise this subject.

Thanks for the additional insights on how to make consistently good landings. For space reasons, we were forced to shorten your e-mail.

There’s no question in our mind that establishing the correct sight picture is critical to this everyday maneuver, one all pilots must master. Looking outside the airplane at all times also is critical, and not just for traffic avoidance, as you point out.

Of course, failure to choose and use the correct sight picture doesn’t explain all landing issues pilots may have. Look for additional articles on these related topics in upcoming issues.