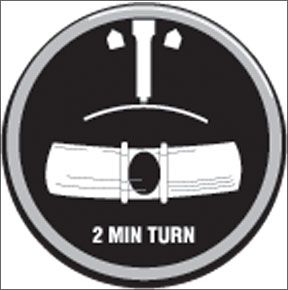 On page 10 under “Ten Things Your Instructor Never Told You” of Mays issue, I have trouble understanding the second item, using elevator as the primary control in a turn, and the seventh, regarding the slip/skid indicator as a means of indicating the direction of a spin. The short paragraphs do not explain the actions well enough for me to get my head around the concept.

Could you please clarify both points for me so I can improve my flying thought processes?

The elevator may be considered a primary control in constant-altitude turns. Aileron is used to establish the bank and rudder to counteract yaw. Meanwhile, some of the vertical lift component is diverted to horizontal lift-its the horizontal lift component thats turning the airplane-and elevator is used to increase the wings angle of attack to maintain altitude and to control the turns quality.

In a spin, the slip/skid indicator is unreliable to determine direction of rotation. Reasons include how the indicator is installed-on the left or right side of the cockpit, for example-and the type of spin. Other means should be used to determine the spins direction.

I just read your article on different LSA engines (“LSA Engine Safety,” May 2008). An aircraft mechanic friend of mine has experimented with different lubricants for the two-strokes such as the Rotax and similar. He finds the life expectancy of these engines is almost directly related to the oil type. He notes those using the

cheaper oils find lower life expectancy and he rebuilds a lot of these engines. Thus an article on tribology, the science and technology of interacting surfaces in relative motion, might be worthwhile.

Another friend has had several deadstick landings in the last two or three years in aircraft with these two-strokes. The engines failed mainly because of seizing from loss of lubrication. These failures are not part of the stats because most of these failures occurred over a field and successful landings were accomplished. Another friend tore down an O-200 after running it on 100LL for about 600 hours and found the valve guides were all split.

Thus, how one deals with fuels and lubricants has a direct impact on aircraft safety.

Based on our personal experience with vintage motorcycles and despite their simplicity, lighter weight and higher power/displacement ratio, two-stroke powerplants are more intolerant of poor lubrication and cooling when compared with similar four-stroke engines. When mistreated, any engine can be made to fail.

Accident statistics do not reflect engine failure rates among non-commercial operators because there is no requirement to report them to the NTSB in most instances where there is no other damage to the aircraft.

Im not a CFI, or even a high-time pilot, but I just finished Rich Stowells article on CFIs (“The Problem With Flight Instruction,” May 2008) and am dismayed by his comments on turnbacks.

Most of us were trained to land straight ahead in this situation and this would be the best course most of the time. But what if you already have the altitude and/or airspeed to make the turn with a wide margin of safety?

Id like to read an aviation expert with the courage to address this issue in specific parameters, rather than dogma. Then each of us could practice for and make an intelligent decision, rather than dutifully plow up a perfectly good airplane when it could have been turned back for an uneventful landing.

I have just finished Rich Stowells third tirade against flight instructors in the May 2008 issue. I agree with the vast majority of what Rich says but there is one item

with which I take issue: flight instructors teaching students to turn back to the airport with an engine failure shortly after takeoff.

I have been hanging around FBOs for over 50 years and have never heard an instructor telling or hinting to a student that turning back was anything but a bad idea. I have heard instructors tell a student, “Lets go try it from a safe height.” This invariably results in massive loss of altitude if not control.

The desire to turn back seems built in and it is up to the instructor to remove the built-in bias. I say this as a glider pilot who knows its possible to turn back, but the maneuver must be done correctly and practiced. This is a maneuver which, if not done correctly as noted by Stowell, usually will result in disaster. While proceeding straight ahead may bend some aluminum, the pilot, or more to the point, passenger will likely survive.

However, to the original point, I have never heard an instructor recommend turning back to the airport when dealing with an engine failure on takeoff. Other than this point, I am in complete agreement with Rich Stowell.

The discussion on turnbacks after an engine failure in Richs three articles and here in Unicom has its roots in the landmark article he wrote for our January 2006 issue. In it, he described the results of a simulator-based study involving a variety of pilots who were asked to attempt a turnback shortly after takeoff, at 500 feet agl. Only in the rarest of circumstances was the attempt successful, even after practice.

Lost in the noise level is the turnback concept: The engine fails during initial climb, when theres no altitude, airspeed or energy to make many choices. As altitude, airspeed, energy and distance from the airport increase, so do options, including a possible return.

Finally, we and others are personally aware of instructors who have advocated turnbacks.

As pilot of a high-performance complex single, I appreciate the comments in recent issues regarding the sanity of VFR flyers rolling the midair dice by purposely transiting a hot MOA no matter how dead within their rights they may be (“The MOA Mess,” May 2008).

You did not mention if these mid-teens VFR flights were availing themselves of flight following with ABQ center. If they were not, they should have been. If queried, ABQ will provide the MOAs status. No rational ex-military pilot would want to mix it up with F-16s executing a combat intercept training mission no matter what kind of TCAS they may have!

Whether the Pilatus or the Premier were receiving flight following services from ATC is ambiguous. Initial reports suggested they were, but that detail remains unconfirmed.

In the meantime, the FAA announced in mid-June it will print contact information on each new chart, beginning in August. Wed like to think the recent MOA encounter-perhaps along with our and other publications coverage-had something to do with implementing this long-overdue enhancement.