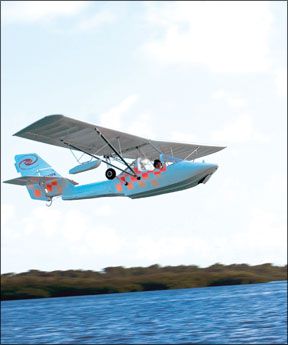 I had just finished reading the latest edition and was mentally commenting on how professional a journal you put to publication. I have been particularly impressed with how hard you try to get the message of keeping sharp on ones skills-especially during the changing seasons when one may have laid off flying and have become “rusty” in both his skills and knowledge.

Shortly thereafter, I began browsing the Internet for news updates and, to my amazement, began seeing headlines of GA accidents amounting to 13 souls lost over the June 28-29 weekend: Five were lost in Santa Rosa, N.M., aboard a Cessna 206), four north of Birmingham, Ala., in a Beech Travel Air, and four more near Las Vegas, Nev., in a Cherokee Six. I couldnt help but wonder “why?” Why so many in so short a time? Were these pilots not on top of their game? Did some need a refresher session with a seasoned CFI?

The “witching” days of summer are upon us with high temps and high humidity, which spells “density altitude.” Other than thunderstorms, its the worst weather summer has to offer pilots. I cant help but to think it behooves every pilot to give thought to his/her skill level with summer upon us.

If youre not sure…then ask yourself…which is cheaper? An hour or two with a seasoned CFI, or a funeral?

Thanks very much, Rudy, for the kind words.

That was a very bad weekend, and your list doesnt include the mid-air collision of two EMS helicopters approaching to land at a hospital in Flagstaff, Ariz.; six died in that accident.

Of course, its way too early to know what caused these accidents. Im sure well all learn additional information about them as the NSTB conducts its investigations.

Your May 2008 article, “The Problem With Flight Instruction,” was simultaneously

both informative and disappointing. It was super-informative in that I learned, among all the other things, I simply must, must, must master stall/spin maneuvers to be a safe pilot. The article was disappointing because it said very little about what CFIs need to learn about how to teach.

To earn my secondary teaching credential in California (which I held for 15 years) I had to not only pass tests on the subject(s) I would teach, I had to earn what was essentially another Masters degree in education techniques, regardless of subject, as well. First among the many things I learned was that a good teacher will advance the student one hour for one hours instruction (or a school year for a school years instruction) regardless of from where the student starts. To do that sometimes means spending some time just enjoying whats been learned to cement the skills.

The second significant thing I was taught was that a good instructor adapts to the needs of the student and puts aside his/her own ideas of how the student should advance-or, ideally, doesnt have any such notions to begin with (beyond advancing the student hour for hour).

Reading through the FARs, I have yet to find any requirement for CFIs to study how to teach. All they seem to be required to do is qualify in the subject area but not in the instructional techniques needed to teach it.

The one CFI Ive experienced in the air so far is a super brilliant aviator. He really knows how to fly any airplane and I learned a lot from him.

He also hammered home the concept that the NTSB people wouldnt have quite so much to do and the FAA people wouldnt feel like writing so many regulations if pilots were taught, and required to learn, to be responsible for actually flying their airplanes correctly and well. Hes very right on that point.

Our mismatch was that he was so successful with the teaching techniques hes developed over his flying life that he couldnt do for me the second significant thing I mentioned earlier: He couldnt adapt to what I needed as a student and, after a while, learning wasnt fun for me most of the time, so I had to move on.

I cant/wont speak for others, only for myself. I need an instructor who will let me

work through my garbage habits at my own pace however I can “git er dun.” I need an instructor who will adapt to me and make it fun for me to learn to fly. For an old guy like me, and maybe others, a teacher needs more than just flying experience.

Interesting perspective, and one with which we cant argue. Although the FAA does require instructors to pass a written exam cover the fundamentals of instructing, the material covered is very basic. While CFIs go through refresher training biennially, the curriculum may not include these topics.

Ahh, the infamous turnback again rears its ugly head! Regarding “Turn Again” in your May issue, it strikes me “turnbacks” (and probably a host of other GA issues) are a little like the “lean of peak” wars early days. Today, at least with lean of peak and related engine management issues, there is a ton of data out there that allows anyone with a third-grade education and an open mind to intelligently decide if its right for their operation.

It seems that not nearly as much definitive data exists for turnbacks! For starters, depending upon which type of turnback you choose, “aggressive” or “conservative,” pilot skill and experience plays a big part. Of course, this is not a “one-size-fits all” issue! Probably no other maneuver in flying is more capable of saving your life (and airplane) if executed correctly, or more capable of killing you if poorly done.

To me, the bottom line is practice makes perfect. If a pilot isnt willing to practice this high-performance maneuver, he or she should land straight ahead. Some new info suggests a number of turnback accidents resulted in too-shallow banks and trying to stretch the glide back to the airport.

To me, the saddest scenario is someone who landed “straight ahead” and tore up the airplane or worse when they had sufficient altitude to make it back but didnt know it because they never practiced and blindly followed tradition.