If you had the typical student-pilot training, you likely spent a good bit of time with the airplane hanging on its prop, stall-warner blaring or shining at you, as an instructor coached you through slow flight, the various kinds of stalls and their recovery. Hopefully, you came away from that portion of your training with a firm understanding of what the warning means and how to correct for it.

A stall warning system is something of a last resort: By the time it activates inadvertently, you’ve already ignored several other indications that the airplane is approaching a stall. You’ve allowed the airplane to get too slow, with too high an angle of attack and/or loaded up with additional G forces. Then you’ve ignored the controls getting mushy, as well as perhaps the airplane’s own aerodynamic warnings, like a burble or buffet. Most personal airplanes have some kind of stall warning system, as a final attempt to get our attention. They come in two basic flavors: the vane type or the reed type.

The vane type is a popular solution. It’s typically an electromechanical system, so it requires ship’s power to work. As the wing to which the warning vane is mounted approaches its critical angle of attack, the relative wind changes direction. The stall warning vane is placed so the change in the relative wind pushes the vane up and closes a switch mounted to the vane assembly. Closing the electrical circuit activates a light, horn or both. An example of the vane-type stall sensor is pictured at left. Some airplanes may also incorporate a stick shaker and/or pusher to further warn against an impending stall.

This type of sensor has some advantages and disadvantages. The principal disadvantage is that it requires electrical power, which isn’t always available. It also weighs slightly more than the reed type of sensor, addressed below, and is more expensive. The good news is that it’s usually easy to maintain. Some screws attach the sensor to its mountain location and a couple of wires connect to power. Once removed, the switch and other components can be replaced or repaired. This type of sensor also lends itself more readily to being heated as part of an ice-protection system.

The other basic type of stall warning sensor aboard personal airplanes is the reed type, typified with a small oval slit in a wing’s leading edge. Mostly found on piston-powered Cessnas, the reed sensor has the benefit of not requiring electrical power, although it can be configured to operate a circuit. It functions in the same basic way as the vane type of sensor: it’s also affected by the change in the relative wind near the critical angle of attack.

Instead of moving a vane and closing a circuit, however, the typical reed-type stall sensor allows a low-pressure area to form internally as the relative wind passes over it at high angles of attack. Via tubing, it’s connected to a reed in the cockpit. The reduced pressure forces air to flow into the cockpit-mounted reed, which vibrates and makes noise, providing the warning. Think of it as an over-engineered kazoo. The reduced pressure also can close a switch, activating an electrical circuit. This type of sensor works best on high-wing airplanes, which allow the reed to be located in the wing root, near the pilot’s ear.

One downside of the reed-type sensor is that the tubing can become clogged with foreign material. It also is less likely to be heated, given the likelihood of ice-melt flowing into the tubing where it can refreeze. But the reed-type often can be lighter and much less expensive than a vane installation.

During your student-pilot days, you likely learned how to check the device during your preflight inspection: Walk around to the stall warning vane or inlet, and actuate it. The vane was easy, as long as the master switch was on—just lift it and listen for the horn in the cockpit. The inlet was a little more involved, though; you had to provide some suction. It was generally recommended to use a handkerchief (who carries a handkerchief these days?) to cover the port, put your mouth over both and inhale. Again, you should hear the warning as the reduced pressure sucks air through the reed.

Warning lights alone instead of horns, as older Piper Cherokees were equipped, require asking another human to note if the light illuminates during a preflight inspection, which makes them problematic when soloing. Unless the sensor is not fully secured, that’s pretty much it for preflighting the stall warning system in a typical personal airplane.

Both types may offer adjustment through their mounting scheme. Typically, the sensor itself can be adjusted by loosening the mounting screws slightly and repositioning it as desired, and then tightening the screws. At least one test flight likely will be required to ensure the repositioned sensor activates as desired. Some resources suggests they should activate at five to 10 knots above stalling speed, which is a kind of metric, we suppose. But it seems counterintuitive when angle of attack, not airspeed, is what determines when the wing stalls. In steep turns and/or when subject to G loading, there may be little margin between warning and the actual stall, even if adjusted to activate early.

As with so many things, there are two schools of thought regarding when the stall warning should activate. One school of thought wants it to come on early, providing maximum warning in advance of the stall. The other school of thought opines an early warning is less granular and does a poor job of advising the pilot how close to a stall the wing may be. Adjusting the sensor to activate closer to the critical angle of attack gives the pilot more information than when it comes on early, they say, and is a more valuable warning. 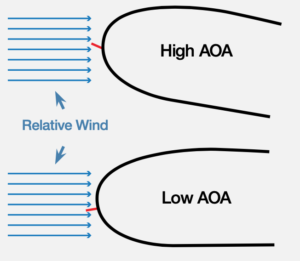 Regardless of which type of stall warning sensor is installed, it works the same way. At right, a vane-type sensor is depicted in red, with the relative wind in blue. When the angle of attack nears the wing’s critical value, the vane is deflected upward, closing the incorporated switch and completing the stall warning circuit, and activating the horn/light. A reed sensor works the same way but creates a reduced-pressure area, drawing air through the cockpit-mounted reed.

Something We Don’t Talk About Enough