The kinds of operations the NTSB is concerned about include parachute jumping, extreme maneuvering/mock air combat, “living history” flights and some kinds of air tours, among others. “Members of the public who pay to participate in Part 91 revenue passenger-carrying activities are likely unaware that these operations have less stringent requirements than other commercial aviation operations,” said an NTSB synopsis of the situation.

“The NTSB remains concerned with the inadequate safety standards the FAA allows for some revenue passenger-carrying general aviation operations,” Sumwalt said. “When someone pays for an air tour, a parachute jump flight, or an extreme aerobatic experience flight, they have the right to expect effective safety standards for such operations. Currently that is not the case.”

The NTSB pointed out that “operators of commuter and on-demand flights must hold certificates requiring specific operational, training, maintenance and safety standards,” but the FAA has made allowances for certain revenue passenger-carrying operations to be regulated under the non-commercial rules of Part 91. According to the safety board, “there is a lack of FAA oversight, a lack of structured pilot training, deficiencies in pilot skills and decision-making, and inadequate aircraft maintenance.”

In addition to the October 2, 2019, crash of a Boeing B-17G Flying Fortress operated by the Collings Foundation pictured below, other examples of for-hire Part 91 accidents involving paying passengers include the July 30, 2016, crash of a commercial hot air balloon near Lockhart, Texas, which killed the pilot and all 15 passengers. The NTSB said this crash was the deadliest aviation accident in the U.S. since 2009. Another related accident occurred on March 11, 2018, and involved a helicopter flight over New York City operating under the exception of an aerial photography flight. According to the NTSB, its investigation “determined the intended purpose of the flight was an air tour.” The helicopter lost power and was ditched in the East River. All five passengers aboard died.

Specifically, the NTSB said, “The lack of a requirement for all Part 91 revenue passenger-carrying operators to have safety management systems and inadequate FAA oversight of those systems when voluntarily implemented introduce risks the NTSB determined were unacceptable and avoidable.” The NTSB made six new recommendations to the FAA as a result of its investigations. 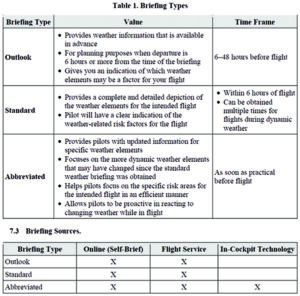 The latest entry in our “Why didn’t they do this before?” sweepstakes comes from the FAA, which in March released a new Advisory Circular on preflight weather and aeronautical briefings. The new guidance is AC 91-92, “Pilot’s Guide to a Preflight Briefing.” According to its preamble, the AC “provides an educational roadmap for the development and implementation of preflight self-briefings, including planning, weather interpretation, and risk identification/mitigation skills. Pilots adopting these guidelines will be better prepared to interpret and utilize real-time weather information before departure and en route, in the cockpit.”

Surprisingly comprehensive in our view, the 21-page AC includes a variety of definitions for terms used throughout the preflight briefing process, including risk management calculations, plus a range of online resources and detailed guidance on what to expect from the various types of briefings. The new AC is available free for the download in Adobe’s PDF format at tinyurl.com/SAF-Preflight.

If you have had a confirmed case of Covid-19, did not require intensive care and have fully recovered, you should be able to obtain or renew an FAA medical certificate according to a March 26, 2021, policy memorandum from the agency’s director of its medical specialties division. For others, including those who did require intensive care or are “experiencing ongoing residual signs and/or symptoms of confirmed COVID-19,” the application for a medical certificate must be deferred, according to the memo. In all of these cases, a notation in the report submitted to the FAA should be made describing the applicant’s Covid-19 status.

“We appreciate the FAA’s scaled approach to granting medical certificates for pilots and air traffic control specialists who have had COVID-19,” said AOPA Senior Vice President of Government Affairs Jim Coon. “This guidance allows AMEs to issue medical certificates for the vast majority of pilots and controllers who have had COVID-19, requiring deferral in only the most severe cases.”

Got Your Vaccine? Wait Two Days Before Serving As PIC 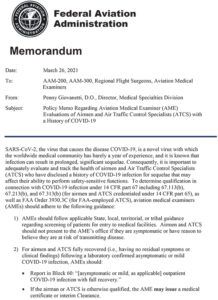 If you’re one of the millions in the U.S. who obtain a vaccination against the virus causing Covid-19, you must wait at least 48 hours before serving as pilot in command, according to the FAA. However, “In the event that an FAA medical certificate holder experiences side effects after the 48-hour period has elapsed, the medical certificate holder may not act as pilot in command, or in any other capacity as a required flightcrew member…for the duration of the symptoms.”

That’s courtesy of policy statements published by the agency as each of the three vaccines became available. As long as you have not contracted a confirmed case of the disease, you do not have to submit any documentation about the vaccination. The FAA’s 48-hour waiting period policy applies to vaccines from Pfizer-BioNTech and Moderna, both of which require two injections, and from Johnson & Johnson, which needs only one injection to be effective.