One of the reasons pilots so frequently lose control in flight is they forget—or never were properly instructed—that an airplane’s published stall speed applies only when at gross weight, in a specified configuration and in level, 1G flight. Perhaps they believe that as long as their airspeed indicator shows a value above the bottom of the green arc, they can’t stall. So they wrack their Skyhawk into a steep turn to look at something on the ground, pull back on the yoke to maintain altitude and forget about angle of attack or increased G-loading.

The frequent result—an accelerated stall with too little altitude in which to recover—has become so common it has its own name: a moose-turn stall, after the classic loss of control accident when pilots try to orbit at low altitude over wildlife. Accelerated stalls, of course, have nothing to do with adding full power and watching the airspeed increase. “Acceleration” in this instance refers to the additional G-loading an airplane sustains in a constant-altitude turn. The simple fact is the airplane’s wing always stalls when we exceed its critical angle of attack, and to maintain altitude, we have to increase AoA when G-loading increases.

Why Does G-Loading Increase In A Turn? 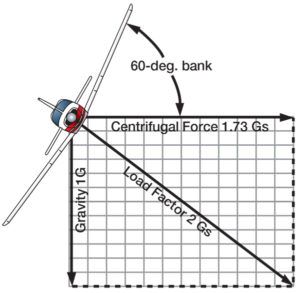 Accelerated stalls require increased G-loading. So why does a turn increase the loads imposed on the airframe in level flight? Because the airplane’s wings have to generate enough lift to match gravity’s normal force plus the additional force necessary to turn. The chart at right provides what should be a familiar depiction of how those forces combine.

In any level turn, increasing the angle of attack is necessary to maintain level flight, even if at relatively shallow bank angles. That’s because the horizontal lift component, which is zero in non-turning flight, becomes a positive, non-zero value. The vertical lift component, meanwhile, remains constant to maintain altitude. The two combine to impose a total load on the airplane which is greater than 1G, and angle of attack must be increased to generate the additional lift required to maintain altitude. It’s important to note that if we don’t want to maintain altitude and can accept a descent while turning, the airplane’s loading can be managed so that the total load factor does not exceed 1G.

Accelerated stalls may be expected on the commercial pilot and flight instructor practical tests in airplanes. Although they’re not part of the private pilot practical test, they should be part of any pilot’s training. Why? Because they demonstrate that, at high-G loading, we can’t depend on the normal stall indications—a light or warning horn, plus the natural stall buffet—to provide adequate warning. These indications typically are present, but the margin between them and the actual stall is much narrower, affording pilots less time to recover from the impending loss of lift.

It’s important to note that an accelerated stall can occur any time G-loading is increased and the critical angle of attack is exceeded. The airplane doesn’t have to be turning to experience increased G; sharply pulling out of a dive also can result in an accelerated stall, even when the wings are level with the horizon. In practice, of course, the accelerated stall demonstration is performed in a turn.

Before demonstrating an accelerated stall, we need to know two airspeeds. The first one is the airplane’s stalling speed at 45 degrees of bank. This is usually published in the manufacturer’s documentation, but is approximately 20 percent greater than the stalling speed in level flight. Whatever value is represented by the bottom of the green arc, add 20 percent.

We also need to be at or (preferably) below the airplane’s maneuvering speed (VA), or at the manufacturer’s recommended entry speed. It’s important to remember that VA is weight-dependent and, when a single value for it is published, that airspeed only applies when the airplane is at its maximum gross weight. At lighter weights, VA is lower, and your entry speed should not be more than the weight-adjusted value. If the airplane’s documentation doesn’t include maneuvering speeds at less than maximum gross weight, reduce VA by one percent for each two percent reduction in the actual weight.

One of the characteristics of spin entry is yawing of the airplane. In fact, the classic spin demonstration is performed by stalling the airplane straight ahead and kicking in some rudder at the break to add the needed yaw. Yaw, of course, occurs in uncoordinated flight.

The classic stall/spin accident occurs when the pilot overshoots the turn from base to final. The cause might be traffic, a tailwind component on the base leg, inattentiveness or some combination. To increase the turn rate and rejoin the runway’s extended centerline, the pilot steepens the bank angle and adds some back pressure on the pitch control to maintain the approach airspeed. As bank angle increases, the airplane’s natural tendency is to further steepen the bank as the outside wing creates greater lift. To counter this overbanking tendency, the pilot naturally adds aileron input to reduce the bank angle.

The result is aileron opposite the turn with rudder applied in its direction. This is uncoordinated flight and, if the critical angle of attack is exceeded with these control deflections, the airplane is likely to spin. At low altitude, as when turning from base to final, there usually isn’t enough altitude to recover. Maintaining coordinated flight when demonstrating accelerated stalls is mandatory to minimize the risk of a spin.

From straight-and-level flight at the desired speed and with wing flaps retracted, smoothly roll the airplane into a 45-degree bank and add back pressure on the pitch control to maintain altitude. The airplane will slow down as greater drag is produced by the increased lift required to maintain altitude at the higher G-loading, so more back pressure will be necessary. When the wing’s critical angle of attack is reached, it will stall. On the off chance you’ve completed a 360-degree turn and haven’t entered the accelerated stall you’re attempting, slightly reduce power and keep trying. Maintain the 45-degree bank throughout

As noted earlier, the margin between stall buffet and/or stall warning system activation will be narrower than in unaccelerated flight. If the maneuver’s intent is to obtain stall indications and recover before the actual break, you’re done. Relax the back pressure on the pitch control to maintain level flight and roll wings-level. If you want to experience the break and then recover, allow the stall to occur. If you think about it, note the airspeed at the break and whether it’s the same as you’ve determined for the 45-degree bank. Thanks to instrument error, it probably isn’t, but it may be valuable to know what the airspeed indicator actually says.

Presuming you’ve maintained a coordinated turn, in both cases recovery is conventional: lower the nose, roll wings level and adjust power as necessary to maintain level flight. It’s not a good idea to delay the stall recovery in an accelerated stall—the longer you wait, the greater is the opportunity for the airplane to yaw in its stalled condition and enter a spin. See the sidebar above for more details.

The accelerated stall is more aggressive than a 1G stall, occurs at a higher airspeed than when the wings are level and affords less warning. Remember that the next time you see a moose on the ground and want to circle it.