If you spend much time around old-time pilots, you’ll eventually get around to one of them going off on a rant about how the kids today don’t know what the rudder pedals are for. From their perspective, they’re right. A lot of the airplanes the old-timers grew up with had squirrelly aerodynamics, exemplified by the characteristic known today—probably then, too—as adverse yaw. The FAA defines adverse yaw as a “condition of flight in which the nose of an airplane tends to yaw toward the outside of the turn. This is caused by the higher induced drag on the outside wing, which is also producing more lift. Induced drag is a by-product of the lift associated with the outside wing.” The graphic below explores the behavior exhibited in a right bank.

If we’re doing it right, we use inside rudder to counter the yawing tendency by keeping the ball centered, minimizing any unpleasant sensations and ensuring the airplane is pointed in the direction we want, not what the physics laws force upon us. In part, it is the younger pilots’ failure to understand adverse yaw when banking and proactively address it with appropriate, coordinated rudder input that has the old-timers shaking their heads. They’re not wrong, although newer airplanes are engineered to minimize adverse yaw, so it’s not as noticeable or objectionable. But there’s more.

One thing about adverse yaw is that its effect is not as pronounced at higher speeds. That’s due in part to greater lateral stability at greater airspeeds. Naturally, there’s less air moving over the control surfaces at low speeds, which is where adverse yaw becomes more evident. When there’s less air moving over the control surface, greater control deflection—of the ailerons, in this case—is required to achieve the same effect. Greater deflection of the aileron creates—you guessed it—greater tendency toward adverse yaw. This has what should be an obvious implication for controlling adverse yaw: Just as you needed more aileron input to obtain the bank you want, you’ll need more rudder to stop the nose from swinging away from the direction of turn.

Another characteristic of adverse yaw is that its effects grow in proportion to wingspan. Basically and stated in weight-and-balance terms, the increased lift and drag of the raised wing has a longer arm with which to work as wingspan increases, putting more energy into the mechanics of pulling the nose away from the direction of turn. As one result, a sailplane equipped with conventional ailerons exhibits even greater adverse yaw than its relatively low speeds would advertise. 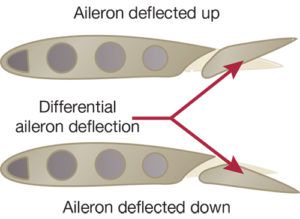 Because their ailerons were basically mirror images of each other, early airplanes had vicious adverse yaw. Learning to fly the slow, ponderous airplanes and maintain heading in even shallow banks required constant rudder use. As designers’ experience grew, they came up with various ways to minimize—but not eliminate—the behavior.

One of those methods is what we now refer to as “differential ailerons.” In this design, when an aileron is deflected down to raise the wing and bank toward the other wing, its movement is restricted so that the opposite aileron has a greater deflection up. Minimizing the downward deflection—or maximizing the upward deflection, if you prefer—helps minimize the characteristic by asking the lowered wing to do more work.

Low-speed adverse yaw brings with it other complications. One example is when rolling out of a chandelle to the left. As we finish the chandelle, we’re decelerating to just above stall speed and trying to roll the wings back to level with right aileron. But adverse yaw wants to pull left. Another force, P-factor, also is pulling the nose to the left. Depending on the airplane, a lot of rudder may be required to keep the nose pointed where you want it at the end of a left chandelle, When rolling out of a right chandelle, i.e., when we’re reflecting the ailerons to roll us left, P-factor acts to counter to tendency to yaw right, requiring relatively less rudder.

Chandelles are slightly different. As the airplane slows and reaches its maximum bank at each 90-degree point of a chandelle, power remains constant. P-factor’s effects become greater, often requiring right rudder input no matter the direction of turn. When rolling into or out of a right turn, adverse yaw combines with P-factor to demand even more right rudder. When rolling left at the chandelle’s 90-degree point, P-factor remains but acts to minimize adverse yaw’s effect. A left turn during a chandelle, therefore, requires both left and right rudder input, then perhaps back to the left, as airspeed decays and then increases.

Of course, there are other things going on when banking at high-power settings and low airspeed—torque and slipstream effect, for example—but we’ll set them aside for another time.

As the sidebar above explains, airplane designers hit on differential ailerons as one way to minimize adverse yaw. Another design—Frise ailerons—also works to for the same outcome. Instead of mounting the aileron’s pivot point at its leading edge, common with both differential and non-differential designs, a Frise aileron’s pivot point is farther aft along the control surface’s chord. As such, when the aileron is deflected up to force the wing down, the portion forward of the pivot point extends below the wing into the slipstream, increasing drag.

This works to reduce adverse yaw by creating drag on the lowered wing where there wasn’t any before. Remember that adverse yaw is created when the outside wing’s aileron is deflected down, increasing lift and drag. The additional drag imposed by the inside Frise-equipped wing counters the drag experienced by the opposite wing and its downward-deflected aileron. Of course, it also increases overall drag.