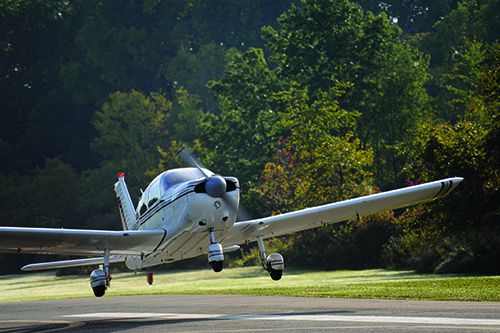 The pilot’s operating handbook (POH) or airplane flight manual (AFM) checklists help make certain the airplane is configured properly before beginning the takeoff roll. Professional flight crews supplement this “hardware” checklist with a pre-takeoff briefing covering the “software” considerations, the pilot decision-making process that accompanies takeoff. Examples include: What are the unique hazards affecting takeoff? What performance expectations apply to this departure? How will I know if I’m not getting the performance needed? What is the route, and what altitudes to use getting from the airport to cruise? What will you do in the event of an emergency?

If you’re not a career pilot, you likely haven’t been trained in formal pre-takeoff briefings. Yet we know the ultimate outcome of a flight depends on the decisions we make, the software of flying. I’ve tried for years to come up with a quick, concise pre-takeoff briefing. I queried friends in the airlines, corporate and military to see what they used, in the hopes I could apply it to my flying. Everything I found was too complicated to adapt for single-pilot training and enthusiastic incorporation into everyday flying. So how to develop an easy, single-pilot-friendly pre-takeoff briefing checklist? 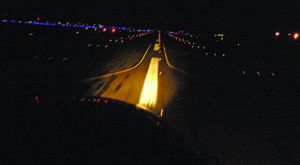 What are the hazards you face for this specific takeoff? How will you mitigate these threats?

What is the route and climb procedure you’ll use to get from the runway to cruising altitude? What is your initial clearance, if any? If no published departure procedure applies, or you’re VFR, what initial heading and altitude do you assign yourself?

What will you do in the event of an emergency or abnormality? Where will you go? What is the arrival procedure if you come back to your departure airport or some other departure alternate?

I could have come up with a checklist on my own, but I’d vastly prefer to have something that benefits from the input of many experienced instructor pilots. So I put together a breakout-group exercise for flight instructors at a recent American Bonanza Society training event. I challenged the instructors in breakout groups to create a usable, concise pre-takeoff briefing checklist consisting of no more than seven steps. Their faces told me they thought this would be a challenge indeed.

The result was a great discussion and a white board full of suggestions for pre-takeoff decision verification. As a group, we looked at the common elements and narrowed it down not to seven but four basic steps to a pre-takeoff briefing. The result is what I call the T-E-N-E (“teeny”) checklist. The sidebar at the top of the opposite page breaks down what the acronym stands for. 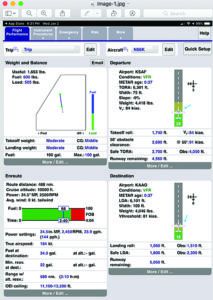 • Lower-than-normal pitch attitude for liftoff, VXME and VYME because of reduced thrust.

There may be an app available for your airplane type that calculates a lot of the information needed for a thorough pre-takeoff briefing. Depicted at right is the Bonanza Performance app, which is free in the App Store and Google Play, and comes preconfigured for various Beech piston singles and twins.

Just as with the takeoff itself, there are a lot of decisions involved in the T-E-N-E checklist. As with any risk-management analysis, you shouldn’t be making these decisions at the hold-short line. The T-E-N-E checklist is a structure for considering all these items during your preflight planning, plus a format for quickly reviewing and reinforcing those decisions just before you take off.

By way of illustration, let’s say I’m taking off in a Beech Baron from Santa Fe, N.M. (KSAF) to Wichita, Kan. Skies are clear and winds are light for departure, but clouds partially obscure the mountains east of the field on a direct route of flight. As I prepare for the journey, I consider all these items, plus many more. The sidebars on this and subsequent pages of this article extract one of the four elements of the T-E-N-E checklist format and expand on at least one theme. 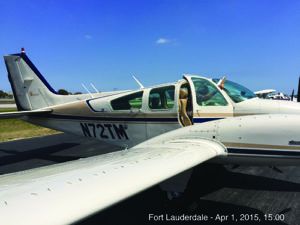 This second step in the T-E-N-E checklist is all about the airplane’s takeoff and climb performance. As its name implies, we identify what experience and book figures tells us about how to configure the airplane and how it should perform in this flight phase. With that understanding as our baseline, we compare those expectations with what we observe. For example, and continuing with the proposed flight from Santa Fe, here’s an example of what we should plan for and expect during the takeoff and departure:

On a proposed flight like this, there’s a lot more to consider than if launching on a trip or two around the pattern, and every bit of it potentially is vital to a safe takeoff and departure. Consciously thinking about it as you plan your departure, however, makes it possible to quickly make most of the decisions before you’re actually flying the airplane. Use the T-E-N-E checklist to remind you to review all this information in an abbreviated fashion just before taking off, like this:

“I’m making a high density altitude takeoff in a fairly heavy airplane in a high traffic area. I’ve confirmed all checklist items are complete. I have a slight crosswind from the right.”

“I’ll attain about 23 inches manifold pressure at full throttle and lean the engines to approximately 1300 degrees F EGT. I should be at 60 knots at five stripes down the runway and lift off about 11 stripes down the runway.” (It can help you evaluate performance if a willing front-seat passenger is briefed to count runway stripes aloud during your takeoff roll.) “At liftoff I’ll raise the nose to VYSE. I’ll delay gear retraction until I confirm a sustained positive rate of climb.” 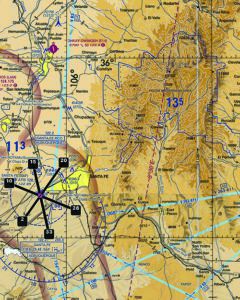 The Obstacle Departure Procedure for Runway 28 calls for a climbing left turn to the SAF VOR, then a climb in the published hold to MEA before departing en route.

From there a left turn to the southeast takes me toward my first fix, around the southern edge of the obscured mountains.

My filed altitude is 11,000 feet, which is the minimum obstacle clearance altitude along my direction of flight.

Altitude and precise departure route may be modified by ATC.

An alternate method is to estimate your liftoff spot using references off the left side of the runway, where you can see it during liftoff, and then a second reference about halfway to that spot. This works well on contaminated or unpaved runways, which often are shorter with non-standard markings, if any. You may even have to pace off this distance before you get into the airplane—you need to select these references with some degree of accuracy.

After reaching 400 agl, I’ll turn southeast toward the VOR and climb to 11,000 feet unless directed otherwise. On course is southeast from the VOR once reaching 11,000 feet. Alternately, if conditions permit, I’ll request ATC for a visual climb, assuming obstacle clearance responsibility myself. If granted, I’ll turn left toward my first fix while climbing to 11,000 feet. Otherwise, and if I need to climb in the hold, the hold at SAF has an inbound course of 334 and an outbound heading of 154. Hold entry will be by teardrop with an initial heading of 120.”

“Any failure to meet power targets on the runway means an abort. Any power loss in the air: PUSH and HOLD; if able to climb, do it straight ahead to the 7500-foot pattern altitude and return to land. If unable to climb or a total engine power failure, PUSH attitude and HOLD heading, identify and verify the failed engine and feather its propeller, climb to at least 7500 feet before making only very small changes in heading, and aim slightly left if needed for an off-airport landing. Best-case, single-engine climb rate will be approximately 200 fpm in zero-sideslip flight. If I need to return for any other reason, climb straight ahead to 7500 feet.”

Remember this “teeny” pre-takeoff checklist and incorporate it in your preflight planning. It’s quick, it’s easy and it’s a great last-minute reminder of the many decisions you make preparing for every takeoff. 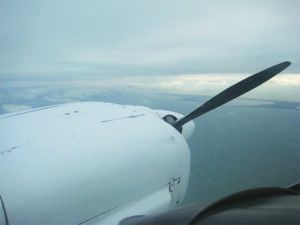 The final item on the T-E-N-E checklist is emergencies. The primary emergency we all face is engine failure, whether involving partial power loss on an engine or outright failure. But there also are other problems we may encounter from time to time. As with so many things in life, timing is everything: An engine failure aboard a twin at cruise altitude is much less of a bother than the same problem 100 feet agl on takeoff. But a partial failure is more insidious, and can result in the highest cockpit workload, at least until it’s secured. Always remember to fly the airplane while considering the following checklist items:

Partial Power Loss On the runway

Any failure to attain my target manifold pressure, rpm, fuel flow and/or EGT at the beginning of the takeoff roll, or any abnormal oil or electrical indication, calls for an immediate abort: reduce power and apply braking as necessary.

Any failure to meet power or performance targets during the takeoff roll call for an abort: throttle to idle, with braking as necessary.

PUSH the nose down to maintain VYSE and HOLD wings level with coordinated rudder.

Climb straight ahead to pattern altitude (7500 feet msl at KSAF) if possible before returning for a visual landing.

If unable to climb, treat as a total engine failure. 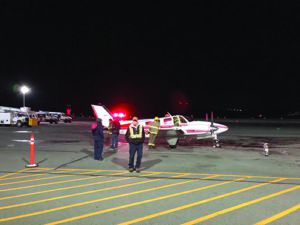 PUSH the nose down to the VYSE attitude and HOLD wings and rudder in the zero sideslip positions.

Best-case, single climb rate will be approximately 200 fpm straight ahead in zero-sideslip flight.

If unable to climb or if unable to maintain directional control, pull BOTH throttles to idle, lower the nose to a normal landing attitude and make an off-airport landing.

Climb to pattern altitude before making any turns.

Coordinate with tower for a normal visual landing.