There’s no question the global positioning system, GPS, has revolutionized the way everyone on the planet navigates. In little more than 25 years, the technology has become ubiquitous in automobiles, cellular phones and cameras, to name only a few devices. Oh, and aircraft surveillance/navigation systems, too, which may be its most critical application. None of this would have happened if its reliability and accuracy weren’t so much better than the electronic navigation systems that came before.

Perhaps because of its reliability and accuracy, the U.S. military has for years conducted research into how GPS may be jammed and how jamming can be countered. That testing is conducted at various locations, including offshore, and presumably can affect GPS signal availability and quality throughout the U.S. Of course, any jamming of GPS for whatever purpose is designed to disrupt its availability to all users, including airborne aircraft. The military’s jamming research has and likely will continue to impact civilian users, including aircraft operators. That’s important because not only is GPS increasingly the sole aviation navigation system in many areas, it’s also a core technology of ADS-B, the FAA’s surveillance system.

Musical Chairs At The NTSB (Sort Of) 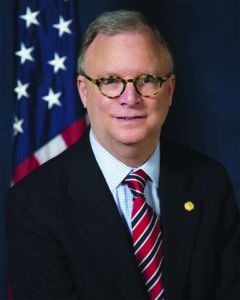 Change is coming to the National Transportation Safety Board (NTSB). Robert Sumwalt, chairman of the panel since 2017, is stepping down to make room for the Biden Administration to nominate current NTSB Member Jennifer Homendy to succeed him. Homendy has been an NTSB Member since 2018.

Before joining the NTSB, Sumwalt was an airline pilot, including 24 years with Piedmont Airlines and its successor US Airways. He’s flown more than 14,000 hours, served on US Airways’ Flight Operational Quality Assurance monitoring team and later managed the flight department for a Fortune 500 energy company.

From 2004 to 2018, Jennifer Homendy served as the Democratic Staff Director of the Subcommittee on Railroads, Pipelines, and Hazardous Materials of the Committee on Transportation and Infrastructure (T&I Committee) of the United States House of Representatives. She previously held positions with the International Brotherhood of Teamsters, the Transportation Trades Department of the AFL-CIO and the American Iron and Steel Institute.

Homendy’s forthcoming nomination was announced April 22; Sumwalt’s last day at the NTSB will be June 30. No replacement for Homendy’s position on the panel has been announced.

We don’t know about you, but it seems every time we get a preflight briefing, there’s at least one Notam about GPS jamming. As the image below from a recent FAA FAASTeam notice depicts, U.S. military jamming tests can affect GPS’s availability over a widespread area, According to a February 2, 2021, article on Engineering.com, “There have been 90 reports of cases of GPS jamming filed on NASA’s Aviation Safety Reporting System (ASRS) over the past eight years—most occurring between 2019 and 2020—detailing abrupt signal disruptions….” According to Engineering.com, “Overall, approximately 173 incidents occurred over six months in 2017, with 60 more arising in early 2018…. The areas most affected by GPS interference are Southern California, southern Nevada, southwestern Utah, western Arizona, and parts of the Pacific Ocean.” The article notes this isn’t a new problem, since the military admitted at least as far back as 2013 that it was aware of the potential for GPS service interruptions.

Recognizing all this, the non-profit research organization Radio Technical Commission for Aeronautics (RTCA) recommended to the FAA in March 2018 some 25 steps the agency and the U.S. Department of Defense could take to minimize the impact of related testing on civil aviation. To date, however, little has come from those recommendations. And the Aircraft Owners and Pilots Association (AOPA) and the National Business Aviation Association (NBAA) want to know why there’s been no progress over the intervening three years. In February 2021, the two associations wrote the FAA and the Department of Defense to put some pressure on them to follow through on the recommendations and request a thorough briefing and update on their status.

“Despite reduced operations in the NAS over the past year, General Aviation continues to show increased activity and volume, exceeding commercial airline operations. In recent months, operators have continued to report operational impacts and reduced access to airspace and airports resulting from intentional GPS jamming events,” the letter noted. “While the RTCA report provided many suggested mitigations and recommendations about protocol to reduce the operational impact on civilian operations, the industry has yet to receive any feedback from the agencies on the disposition of those proposed mitigations. Therefore, NBAA and AOPA are seeking a detailed briefing and update on the status of that industry report, including the work done over the past several years to help provide operational relief,” the two groups wrote.

The National Airspace System “has become increasingly reliant on GPS as the primary source of navigation and aircraft system functionality while reducing the ground based navigational backup infrastructure,” AOPA/NBAA said.

What You Can Do About GPS Problems 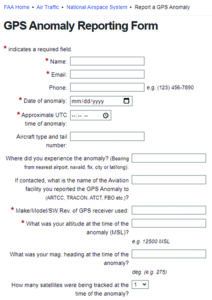 The 2018 RTCA recommendations reportedly include suggestions for pilots who may have experienced degraded or failed GPS signal reception while airborne. For that purpose, the FAA has an online “GPS Anomaly Reporting Form,” an excerpt from which is at right. The agency seeks information on any anomaly, not just military-sponsored jamming, and notes the information provided “will be used to correlate your event with any other reported GPS anomalies and assist in an investigation.”

That’s fine, but you have to get on the ground first. During their preflight, smart pilots will research Notams for potential GPS jamming and outages and plan accordingly. In some cases, GPS may not be available, along with ADS-B and/or related systems. If you’re depending on a GPS approach to an airport in an affected area to get you home, it would be a good idea to have a backup plan that uses terrestrial navaids (VOR/DME/ILS). Don’t forget alternate airport designations, and the availability of non-GPS approaches.