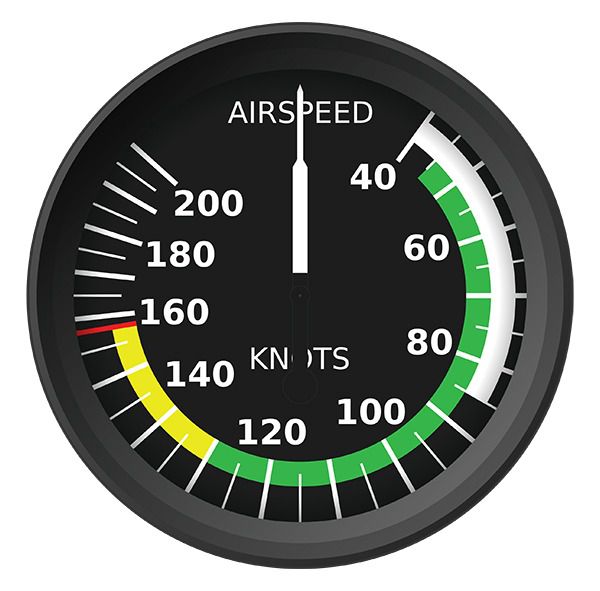 If you studied aviation accident reports as much as we do, one of the many phrases you’d often see is “failure to control airspeed.” It crops up in runway overruns a lot, but primarily appears when discussing in-flight loss of control accidents, of which there are enough the probable cause has earned its own acronym: LOC-I. The classic LOC-I accident might involve a stall/spin event at the low end of the airspeed indicator or airframe failure at the other. But the bottom line is someone wasn’t paying attention to a major thing that’s critical to controlling the airplane.

As the saying might go, “Everyone talks about airspeed control but no one does anything about it.” Let’s try to chip away at that problem for a moment, by highlighting the four basic ways we control airspeed—power, pitch, drag and trim. Also important is how they interact and how managing all of them is the only way to ensure we’re using all of the controls, including the ailerons and rudder, to achieve coordinated flight.

Power’s relationship to airspeed control usually is well-understood: Increase power to go fast, reduce it to go slow. That simple cause-and-effect relationship falls down, however, when we’re behind the so-called “power curve,” which is explored more fully in the sidebar on the following page, and which also highlights the need to coordinate other control inputs to manage airspeed.

As we change the power setting, a typical airplane will want to change its pitch attitude. The rule of thumb is that an airplane with its thrust line roughly in alignment with the center of gravity (CG)will suffer little or no tendency to change pitch as the power setting is changed. As we move the thrust line vertically away from the CG, the airplane’s tendency to change pitch is increased. When the thrust line is above the CG, the airplane will tend to pitch down when power is increased, and vice versa. Also involved in this tendency is the extent to which, if any, a power change alters the flow of air over the typical airplane’s horizontal stabilizer. When we change power but want to remain at the same altitude, we must change the airplane’s pitch attitude.

Whenever we talk about controlling airspeed, we’re talking about indicated airspeed. But there are two other kinds of airspeed we typically need to concern ourselves with.

IAS is the direct instrument reading obtained from the airspeed indicator, uncorrected for variations in atmospheric density, installation error or instrument error.

TAS is CAS corrected for altitude and non-standard temperature. Because air density decreases with greater altitude, the ASI will indicate lower than “true” because there is less difference between pitot impact pressure and static pressure.

Like power, the airplane’s pitch attitude has a huge impact on its airspeed. As an example, for a given power setting, there are pitch attitudes that produces a descent and others resulting in a climb. That’s one reason pilots maintain that power has little impact on airspeed but pitch has everything to do with it. The truth—and one of the major points underlying this article—is that they are related and depend on each other to be managed by the pilot to achieve the desired performance.

On one of your first flying lessons, the instructor probably demonstrated the relationship of pitch to airspeed. At a constant power setting, she directed you to pull back on the pitch control. In response, the airplane entered a climb and airspeed decreased. When the change in altitude and speed was apparent, she then asked you to push forward on the pitch control, beyond level flight. The result was a descent, while airspeed increased. That demonstration should have made very clear that airspeed is dependent on power and pitch, and that neither control has absolute authority over airspeed.

Where Are You On The Power Curve? 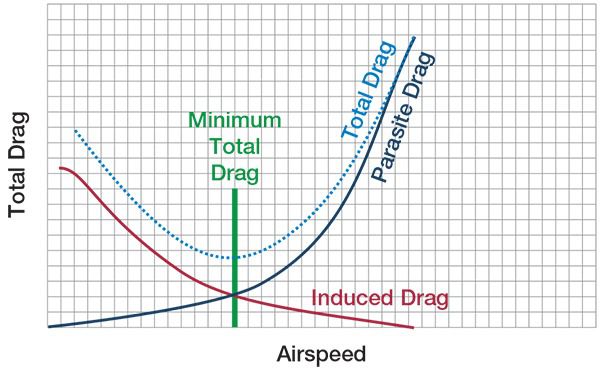 When pilots talk about the power curve, they’re talking about a graph like the one above. The graph plots airspeed on its X axis and total drag on the Y. Total drag, of course, is the sum of induced and parasite drag. Parasite drag, meanwhile, increases with airspeed while induced drag’s increase corresponds to the amount of lift generated. For every airplane at a given weight and configuration, there is a certain airspeed that can be called the “minimum drag speed” at which total drag is the least it can be in flight. This point is marked on the graph above by the green vertical line.

The minimum-drag speed is important in another way. When we accelerate above that speed, drag increases and the airplane is not flying as efficiently as it could, at least as far as drag is concerned. Meanwhile, when we slow the airplane below that speed, induced drag increases, requiring more power to maintain altitude even as airspeed drops. The front of the power curve is the area to the right of the green line; the area to the left of the green line is behind the curve.

Often overlooked in discussions of airspeed control is the impact drag can have. This is relatively easy to demonstrate in almost any personal airplane. To do so, start in level flight at an airspeed below the maximum flap extension speed—below the top of the airspeed indicator’s white arc—and add a notch of flaps. One thing is certain to happen: the airplane will slow down, maybe not immediately, but soon. In the bargain, its pitch attitude may change. To slow further at the same power setting, add another notch of flaps. By this point, you’ll likely have to change pitch to maintain altitude, but airspeed will have been reduced even further from its no-flaps value.

The same effect drag has may be demonstrated by lowering the landing gear in a retractable or, for a demonstration with much less magnitude, opening the cowl flaps on an airplane so equipped.

Often omitted from airspeed-control discussions is the use of pitch trim. That’s because, like drag, trim is considered a secondary control. We typically use it to reduce pilot workload, especially in cruise flight with constant power and pitch. In a way, it works to verify the relationship between power and pitch.

The demonstration is this: From trimmed cruise flight, reduce power. The airplane will begin to descend at the same airspeed to which it was trimmed. Alternately, establish a trimmed, full-power climb, then reduce power. The airplane will slow to its trimmed airspeed and the climb rate, if any remains, will be minimal. The reverse is true if adding power in a trimmed descent

The bottom line in all this is that controlling airspeed is not a matter of using one control, whether primary or secondary. Instead, it’s an “all together now” thing, and coordinated flight requires us to use all the available controls.