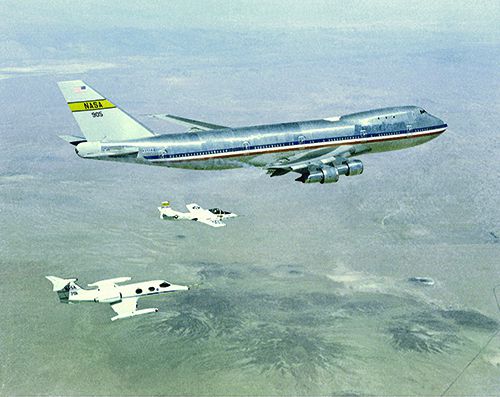 Prior to the advent of jet transports like the Boeing 707 and Douglas DC-8 in the late 1950s, what we’ve come to know as wake turbulence was often dismissed as “propwash.” As heavier and heavier aircraft, like the Lockheed C-5 and the Boeing 747, grew in numbers, the FAA, NASA, the U.S. Air Force and the commercial aviation community engaged in studies of the phenomenon to establish safe operational distances between similar and dissimilar size aircraft. The final series of test flights involved the NASA Boeing 747 pictured at right, sometimes trailed by the Cessna T-37B and Learjet 23 shown. The lighter aircraft were deliberately “flown into the vortices to determine vortex strength and safe separation distances,” according to NASA.

“In each of the series of test flights, probe pilots flying near and into vortices experienced varying degrees of instability, altitude loss, and rolling excursions due to strong turbulence,” NASA reports. “Fortunately, none of the aircraft involved in any of the tests was structurally damaged. Experiences logged by probe pilots included sudden altitude losses of up to 4000 feet, sudden rolls of up to 720 degrees at rates of more than 200 degrees a second, and violent yaw accelerations.”

According to the agency, aircraft as varied as the Convair 990, Douglas DC-9, Douglas DC-10, Lockheed F-104, Cessna 310 and Boeing 727 participated in related research at one time or another. “Data produced by the series of vortex research flights aided the FAA in determining safe, minimum separations distances between aircraft to minimize potential hazards that can occur when large and small aircraft are mixed during normal airport operations,” according to NASA.

Recent studies use calibrated microphone arrays and laser radars on and near airports to locate and record wake vortices and determine if acoustic-based wake vortex sensors may be able to give pilots advance warnings of the location and strength of wake turbulence, NASA said.