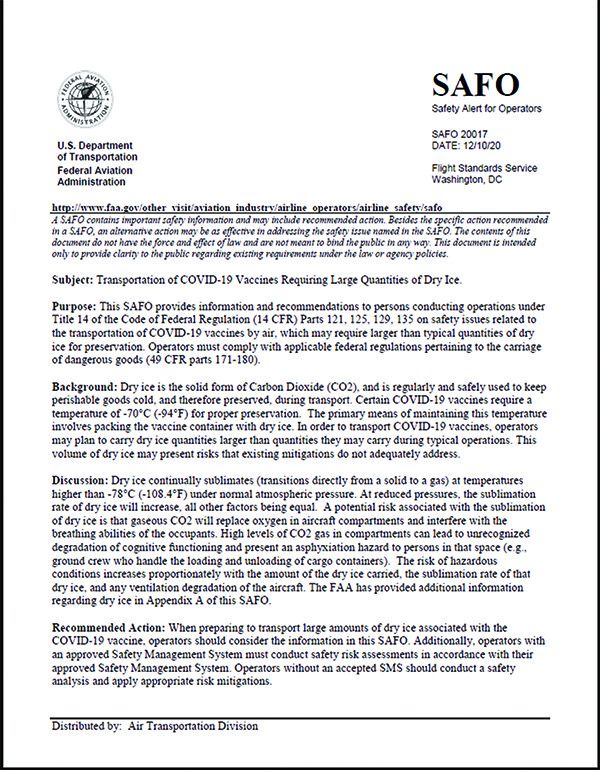 Following the Emergency Use Authorization from the U.S. Food and Drug Administration for Pfizer, Inc.’s COVID-19 vaccine, the FAA has determined that pilots may receive the vaccine under the conditions of their FAA-issued airman medical certification. FAA Air Traffic Controllers, who are subject to FAA medical clearance, may also receive the vaccine.” So reads the first paragraph of the FAA’s December 12, 2020, news release announcing its acceptance for medical certification reasons of the first authorized Covid-19 vaccine. On December 19, the agency made the same statement about the Moderna vaccine after it, too, was authorized by the FDA.

“To maintain the highest level of safety in the National Airspace System, the agency will require aviation professionals with medical certifications or medical clearances to observe a period of 48 hours following the administration of this vaccine before conducting safety-sensitive aviation duties, such as flying or controlling air traffic.” Both the Pfizer and Moderna vaccines require two doses, and the 48-hour waiting period applies after each injection. The FAA said it applies similar waiting periods after administration of other vaccines, including those for tuberculosis and typhoid.

“The FAA anticipates taking no additional measures to ensure safety after the initial window for side effects closes,” the agency added. As other Covid-19 vaccines come to the market, the FAA will evaluate them and likely apply a similar waiting period, and its medical professionals “will continuously monitor the initial distribution of the novel vaccine and documented clinical results and will adjust these recommendations as needed.”

By late December, only the Pfizer-BioNTech Covid-19 vaccine required storage and transportation at unusually cold temperatures, between -60 degrees C and -80 degrees C. The most widely available method to cool materials to those temperatures is packing them in dry ice, which requires its own special handling.

Dry ice is solidified (frozen) carbon dioxide, CO2. It is colorless, odorless and nonflammable. According to the FAA, “When properly vented and shipped in small quantities, dry ice poses little risk to aircraft occupants.” Large quantities of dry ice can pose problems, however.

At temperatures greater than -78 C, it sublimates (vaporizes). Since it is heaver than air, it tends to accumulate near the ground or floor. At lower pressures, like when it’s flown in an airplane, the sublimation rate increases. In a closed room or compartment, it will eventually displace and dilute the oxygen, leading to hypoxia (lack of oxygen). It’s also toxic to brain functioning.

Accordingly, and since it’s likely a wide range of operators will be asked to transport the vaccine, the FAA issued a Safety Alert for Operators, SAFO 20017, Transportation of COVID-19 Vaccines Requiring Large Quantities of Dry Ice. While the SAFO is oriented toward airline operators, pilots flying under Part 91 may also benefit from this guidance. The SAFO is available at the FAA web site: tinyurl.com/SAF-SAFO20017.

According to the U.S. Department of Transportation, unmanned aircraft—drones—comprise the fastest-growing segment in the entire transportation sector. The FAA currently counts more than 1.7 million drone registrations and 203,000 FAA-certificated remote pilots to operate them. Since not all operators have to obtain certification as remote pilots and drones weighing less than 0.55 pounds are exempt from registration, the true numbers likely are much higher. Now, the FAA has published two widely anticipated final rules expanding their use and mandating that they broadcast identification information. 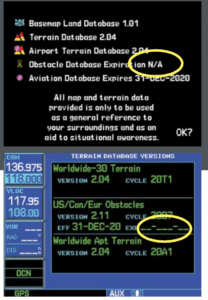 In a December 22, 2020, data alert, Garmin advised operators its GNS 430/530 (non-WAAS) navigators will be unable to display the obstacle database’s effective dates. The causes is reminiscent of the “Year 2000” problem in which it was feared older computer systems would not be able to handle the data change. Although the effectivity date may not be displayed, the database cycle number will be displayed correctly and may be used to confirm the correct data are installed. Garmin advises its obstacle databases will function properly “in every other way.”

The company says its alert, Obstacle Data Alert 20139 Rev. A, will be revised when subsequent database releases are improved. For more information, including full effectivity and expiration information, visit Garmin’s web site at tinyurl.com/SAF-Obstacle.

The new rules will require Remote Identification (Remote ID) of drones and allow operators of small drones to fly over people and at night under certain conditions. “Remote ID will help mitigate risks associated with expanded drone operations, such as flights over people and at night, and both rules support technological and operational innovation and advancements,” the FAA said in a statement.

The Remote ID rule establishes a new set of federal aviation regulations, FAR Part 89, which amounts to broadcasting a digital N-number. According to the FAA, “Remote ID is necessary to address aviation safety and security issues regarding UA operations in the National Airspace System, and is an essential building block toward safely allowing more complex UA operations.” The Remote ID rule includes two compliance dates: Drone manufacturers will have 18 months to begin producing drones with Remote ID, and operators have an additional year to start using drones with the technology. Under the new rule, use of Automatic Dependent Surveillance-Broadcast (ADS-B) Out or an ATC transponder is prohibited under FAR Parts 91 and 107 unless otherwise authorized or if flying under a flight plan and in two-way radio communication with ATC. The new FAR Part 89 also prohibits ADS-B Out as a means of meeting Remote ID requirements. The sidebar at the bottom of page 21 includes additional details of the Remote ID rule.

The operation over people (OOP) final rule amends existing FAR Part 107 and creates four new categories of small drones eligible for routine operations over people and moving vehicles. The four categories are designed to reflect the level of risk a small drone operation presents to people on the ground. Categories 1 through 3 must “not contain any exposed rotating parts that could lacerate human skin upon impact with a human being” while Category 4 drones must have an airworthiness certificate issued under FAR Part 21 and operators must comply with operating limitations in their approved Flight Manual. Additionally, the OOP rule allows for operations at night under certain conditions. The sidebar above summarizes the new OOP rules. 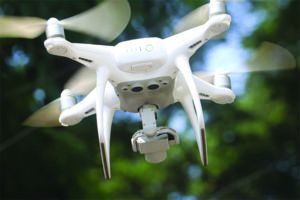 Under the final Remote ID rule, drones required to be registered have three options, described below. Manufacturers must include the technology beginning in mid-2022 and operators must comply 30 months after the effective date.

The OOP rules also require that small drone operators have their remote pilot certificate and identification in their physical possession when operating, ready to present to authorities if needed, and expands the types of authorities who may request this information from a remote pilot. Instead of an existing rule requiring a remote pilot to pass a recurrent test every 24 calendar months, a new requirement will involve recurrent training that includes operating at night. Both new rules go into effect 60 days after being published in the Federal Register, which was expected in early January 2021.

“The new rules make way for the further integration of drones into our airspace by addressing safety and security concerns,” said FAA Administrator Steve Dickson in a statement. “They get us closer to the day when we will more routinely see drone operations such as the delivery of packages.”

The OOP final rule allows routine operations over people, moving vehicles and at night under certain circumstances, eliminating the need for those operations to receive individual Part 107 waivers from the FAA. Four categories are established:

As we reported in our December 2020 issue, the FAA in recent years has taken steps to broaden data collection and analysis of general aviation operations, with a goal of reducing accidents. While many newer GA aircraft already collect operational information, older piston-powered aircraft generally lack such capabilities unless retrofitted with modern avionics. The September/October 2020 issue of the FAA’s bimonthy Safety Briefing magazine and a December article posted to the FAASTeam blog on Medium.com urged pilots to consider that “reasonable performance expectations, based on realistic data from flight data monitors, can help forecast system/component problems before they reach the point of failure, resulting in safer flight operations.” The conclusion stems from work done by the General Aviation Joint Steering Committee’s (GAJSC) working group on system/component failure (powerplant) in which this magazine’s editor-in-chief participated.

According to the blog post, “Changes in aircraft performance can be a sign of developing mechanical issues.” The idea is to use an aircraft’s AFM/POH to help predict its performance, but only by monitoring and comparing the real-world results can any maintenance-related issues be identified. Comparing your aircraft’s performance with the AFM/POH “will enable you to develop accurate performance predictions and reasonable performance expectations,” the blog post stated.

The agency also reminded pilots that they don’t need high-end avionics or recording devices to monitor their aircraft’s performance. “Basic instrumentation such as airspeed indicators, attitude indicators, angle of attack indicators, manifold pressure, RPM, and G indicators” provide real-time feedback on their aircraft’s health and performance. Pilots should track them from flight to flight to detect changes. “Some engine monitors have recording capability and many aircraft owners participate in oil analysis programs—a tool for gauging engine health and heading off expensive or, in some cases, disastrous problems,” the article stated.

The agency stresses that all data collected is “anonymous and de-identified so pilots can share their data without any fear of reporting or reprisal” and notes that the NGAFID is managed by GA community members and alphabet-soup trade associations. To learn more about NGAFID and the GAARD app, visit ngafid.org.

It’s been almost 70 years since the last Cessna 140 was manufactured. Among the many other changes throughout the industry since then, crashworthiness and ergonomics are increasingly important, so it’s probably not a surprise that longstanding concerns about the type’s seat belt mounting brackets are coming to the fore in the form of an FAA Airworthiness Concern Sheet (ACS), seeking information on damage to or failure of the brackets from owners, operators and associated type clubs.

The new ACS, dated December 14, 2020, cites a 2014 accident “where the aluminum seat belt mounting bracket, part number 0425132, failed after the Cessna 140 overturned.” Since then, Cessna redesigned the bracket, which had been manufactured from aluminum, to be made from steel. Now, according to the FAA’s ACS, a second fatal accident has occurred where an aluminum bracket failed. A review of NTSB records and FAA service difficulty reports found additional reports of failed aluminum seat belt brackets.

In 2015, Cessna developed a steel bracket and published a service bulletin about it. Also in 2015, the FAA released a Special Airworthiness Information Bulletin (SAIB) recommending replacement of the aluminum parts with the new steel version.

It’s unclear how many in-service airplanes have been modified with the steel brackets. The FAA’s ACS on Cessna 120/140 seat belt brackets could lead to an airworthiness directive, depending on the industry’s response.