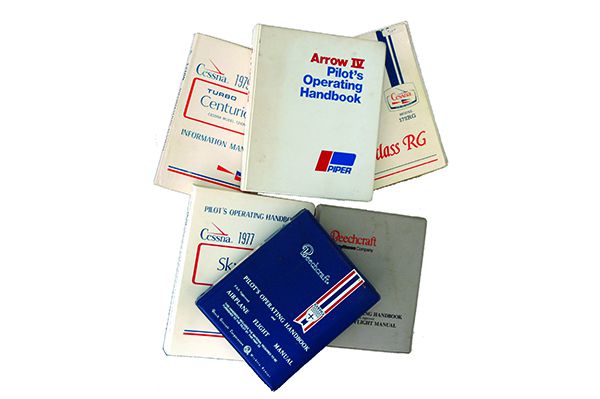 With a respectful nod to Don Brown, a now-retired ZTL controller who helped popularize the phrase, a “flick” is the “big picture.” In the ATC biz, this typically refers to traffic load, major runway flow directions, widespread poor weather, staffing/sectorization and a host of other factors. In other words, strategic information. Pilots need the same overview of the conditions they should expect to encounter, and not just those related to weather. This is often referred to as situational awareness, but that’s too many syllables.

Of course, with the power to make our own operational decisions also comes the responsibility to consider aspects beyond the basic weather/runway variables the FAA requires. The FARs, after all, are minimum requirements. We’re free to exceed them. What are some of those aspects? Are they all operational in nature, or should we consider other items? Let’s explore.

What The FAA Says

As all of us should remember, FAR 91.103 requires pilots to “become familiar with all available information concerning that flight” before taking off. While seemingly absolute, “familiar” and “available” are doing a lot of work in this rule. For example, do I need to know the runway weight-bearing capacity at Class C Regional if I’m flying a Piper Tomahawk? No, but you need to know whether the surface will support your aircraft. For most of us, answering that question at the enforcement hearing should be a no-brainer, if it even comes up.

The rule goes on to list some IFR-specific information requirements, including weather observations and forecasts, traffic delays and alternatives, as must-include items. Runway requirements, considering aircraft weight and atmospheric conditions, are tacked on at the end and made applicable to all flights. Like so many FAA regulations, this one offers us the bare minimum of guidance, while covering most of the basics. The thing many pilots forget is that we’re free to add to this basic list, exceeding these requirements at will as the need arises.

Because our craft operate in the atmosphere, weather is a big part of the flick, and it’s always mystifying when we read an accident report in which there’s no record of the pilot obtaining a weather briefing for a cross-country trip. Before any flight, there are some basic questions you should think about answering. Are there any weather fronts nearby? What are they doing and how quickly are they doing it? What is influencing your local or destination weather? High pressure, with gusty winds? Low pressure, with rain and ceilings down on the deck? Summer stagnation, with heat, haze and afternoon thunderstorms? In what general direction is the flow aloft? Are basic weather metrics—ceiling/visibility/precipitation/wind—forecast to change during your flight? How?

If you’re planning a local flight to catch the sunset, many of these questions can be answered by paying attention to the local television weatherperson. If you’re you’re heading off to a distant destination, you need more weather information. An excellent resource on where and how to get that additional information comes courtesy of the new FAA Advisory Circular, Pilot’s Guide to a Preflight Briefing, AC 91-92. It’s a thorough, well-organized resource that can serve as its own flight plan for those new to preflight weather briefings or as a memory-jogger for more-seasoned pilots. Regardless, it also can be used to help anyone find material that might not be easily accessed from your favorite electronic flight bag app.

Most of us these days use an EFB on a tablet or our cellphone for preflight weather briefings, and depend on the app to retrieve the relevant information based on what we tell it about our starting point, destination and route. That’s fine as far as it goes, depending on the EFB app. But there are times and weather conditions where we may want more information than the EFB offers. You have options.

First and foremost is to call Flight Service and speak with a briefer. He or she typically doesn’t have some secret sauce to apply to dredge up information or graphics not available elsewhere, but they can provide context and answer questions. You also can point your phone at what we’ll call supplementary sites for online deep dives. One of our favorites is a slowly growing network of weather cams, which is just what it sounds like—sites offering a real-time view of the conditions at select airports and locations. giving credence to the “a picture is worth 1000 words” aphorism.

Also, the FAA maintains a surprisingly useful web site— weathercams.faa.gov—for such content, though your destination probably isn’t listed, since they’re concentrated in Alaska, Canada and remote airports/locales in the U.S. The sidebar on the following page for some additional online resources from the FAA and NOAA. 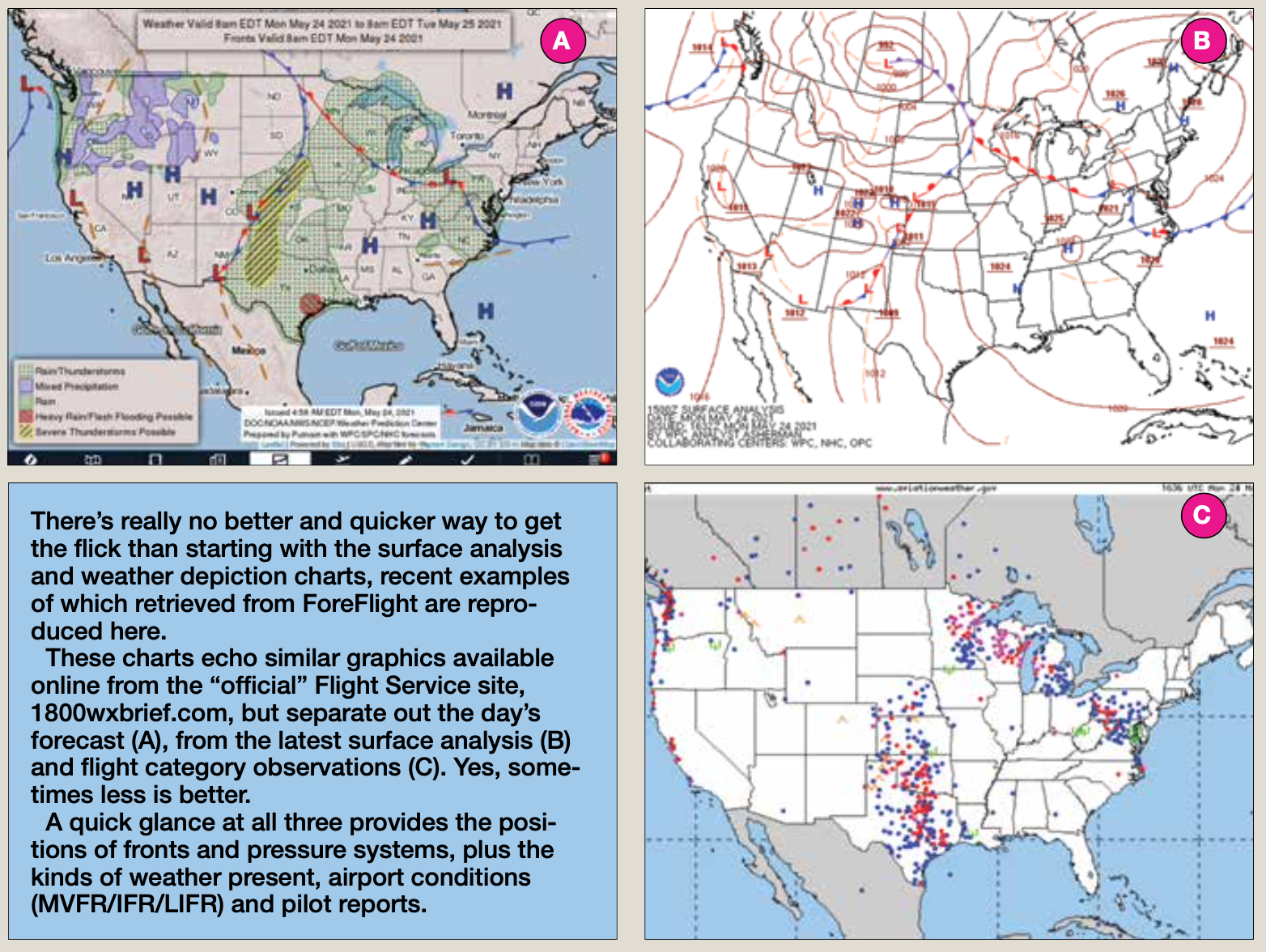 It should be a no-brainer for our preflight information to include airspace. Even if your airport is under a Class Bravo tier and you’ve memorized the altitudes and landmarks defining its dimensions. Maybe you’re planning to stay in the traffic pattern. Keep in mind that both can change with little warning. For the rest of us, reviewing our route for Class B/C/D areas should be reflexive. Again, an EFB makes this rather simple: check the magenta line for potential conflicts. It probably helps to do this with an underlying VFR chart displayed.

When considering either Class B or C, keep in mind the airspace underneath their tiers has different rules. For example, if there’s a Class D under some Bravo airspace, it’s not a given that ATC services are provided by default to VFR aircraft, even if you’re talking to a control tower well within the Class B’s lateral dimensions. You can wind up expecting to automatically have a Bravo clearance when taking off from a towered airport under a Class B tier and blunder into airspace you’re not cleared for before you realize it. Also, some of those Class D towers may not have a way of obtaining a Bravo clearance for you before taking off. Same thing at a Class D airport underlying Class C airspace, though the consequences for stumbling around may consist only of embarrassment. When in doubt or confused, ask ATC.

Which brings us to temporary flight restrictions. There was a time when TFRs were rare, and only activated in situations involving natural disasters and where firefighting aircraft were operating. That ship has sailed, and permanent flight restrictions labeled as TFRs exist throughout the U.S. The good news is these “PFRs” have been around so long, they’re usually charted on your EFB. The bad news is that a new TFR can pop up while you’re airborne and have no way of identifying it without a direct line to Flight Service.

Unfortunately, TFR information sometimes doesn’t trickle down to the EFB platforms in a timely manner. This is where calling Flight Service and asking about TFRs along your route can pay dividends, both before and during your flight. Not only does the briefer have the latest information, but the conversation is recorded and, should you stumble into something they didn’t tell you about, you may not rack up a violation when the F-16 shoots off some flares in front of you if you’re on record asking about but were not told of the airspace you just violated. If we can just get Flight Service to call us when a TFR pops up, we’ll have this licked.

Of course, there’s other airspaceout there. Military operations areas (MOAs) and restricted areas have well-charted dimensions, with active days and times listed. Your EFB app probably is able to pull up the information on when the airspace is supposed to be active, as well as the altitudes. 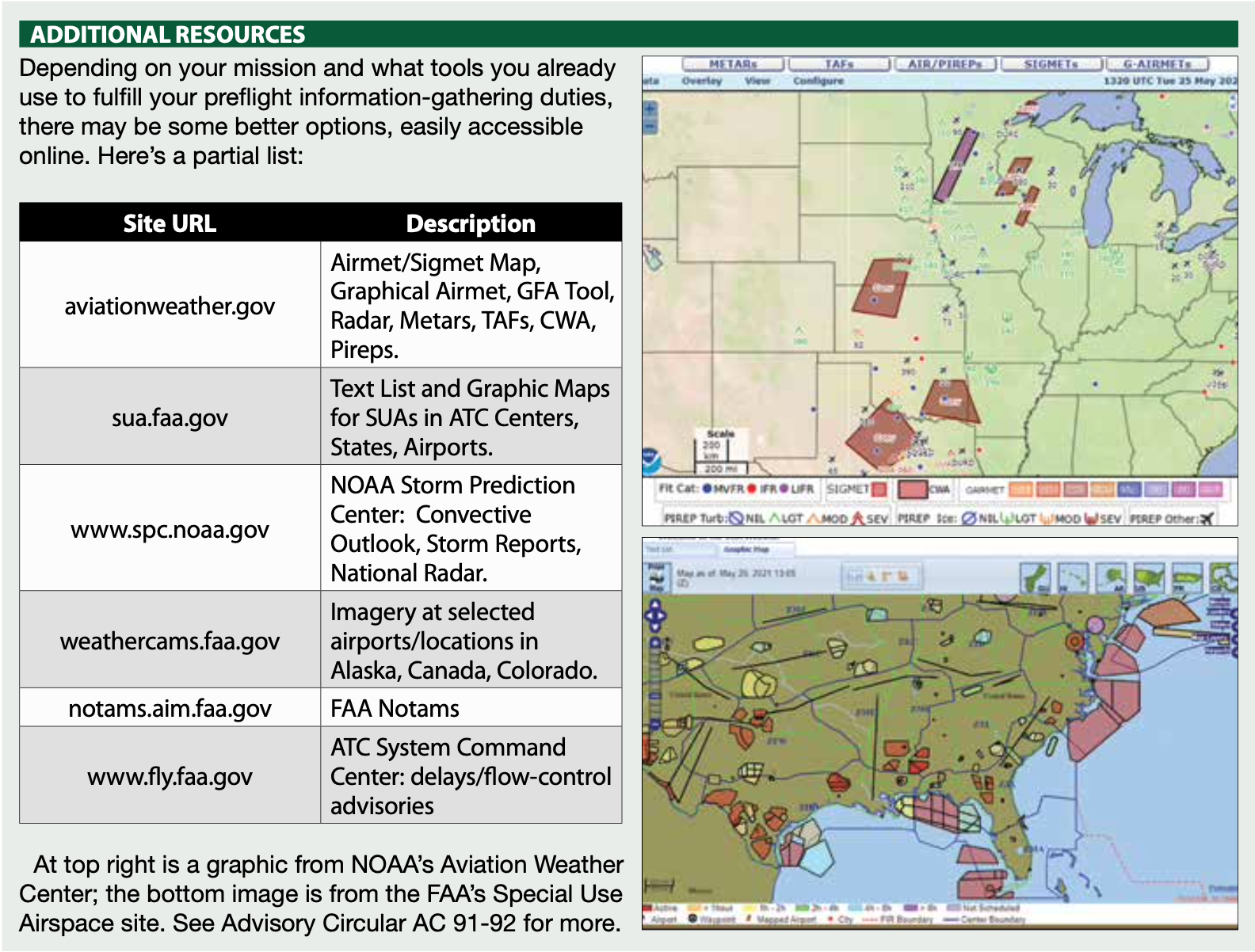 One of the things we always have to do is ensure the airports we plan to use are adequate. This involves weather, of course, but runway length and elevation as well. As the graphic at right demonstrates, there can be several Notams affecting those airports, and parsing them may not be a simple task. Notams can omit a lot of information we may need to make the trip a success, and smaller airports may not even have the resources to file them.

Many airports have only one FBO, and even that can be sketchy. Basic services are typically listed in the usual publications, but what if you need something not shown? Maybe you need to ensure an oxygen refill is available, or want to be in a hangar overnight? You may be arriving after business hours—how can you get your rental car, or even get through the locked gate to the parking lot?

Especially if you’re planning on a destination you’ve never visited before, pick up the phone and call. If the person you reach doesn’t have the answers you need, ask to speak with a local CFI or mechanic. Many online resources also have comment sections, allowing transient pilots to praise the service they received or warn other pilots of problems. The bottom line is that FBOs at smaller airports may be just barely hanging on and not be able to provide services you expect or need. 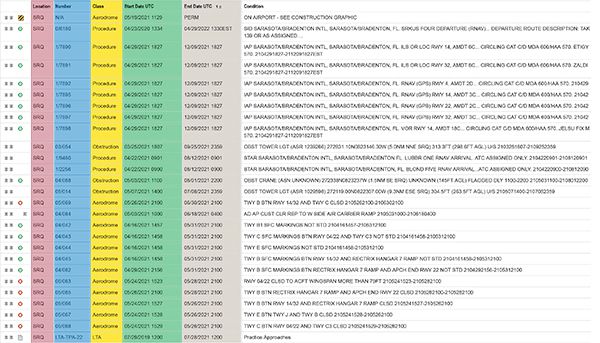 A final topic is notices to airmen. That’s because the Notam system, at least in the U.S., is a joke. In our view, for every relevant Notam, there are 10 others, mostly involving obstructions, of minimal value to fixed-wing pilots. Obstruction-related Notams are, of course, of somewhat greater interest to helicopter and hot-air balloon pilots, but someone forgot to allow users to filter the Notam onslaught for such details.

That said, Notams have gotten easier to retrieve over the years, thanks to distribution technology, but there have been no fundamental changes since their format was standardized decades ago. That revised format, by the way, does facilitate reviewing them, since there actually is some logic to the order in which the information is presented. The graphic above is an example of how the FAA’s official Notam site—notams.aim.faa.gov—formats the raw information, often making it much easier to absorb than competing services, like ForeFlight, shown as an inset.

None of which relieves us from the responsibility to check Notams as part of our quest for “all available information” concerning the route and airports we plan to use. Keep in mind, also, that FDC Notams is where you’ll find broader-scope information that may not come up elsewhere. For example, FDC Notam 4/4386, issued April 5, 2004, says all aircraft in U.S. airspace, “IF CAPABLE, SHALL MAINTAIN A LISTENING WATCH ON VHF GUARD 121.5.” That one is hard to find, and doesn’t come up in our EFB’s FDC Notam section; you have to look for it.

Finally, ensuring we have the big picture depends greatly on the extent of our preflight research. But once we’re airborne and on our way, we need to use the available tools—ATC, Flight Service, ADS-B In—to keep ourselves from losing the flick.