There’s a school of thought that says no pilot should react to anything in the cockpit quickly. At least some of the thinking behind this philosophy is that humans make more mistakes when they are rushed to a decision or action than when they have time to consider what steps to take and then, you know, doing them. There are good reasons to adopt this idea. Engine failure in a twin comes to mind—even airline captains secure the working engine on occasion—and calmly using checklists in such an event is the correct response.

Even when there’s no checklist to perform, our tendencies are toward quick reactions. One example is immediate application of full throttle on takeoff instead of smoothly bringing up the power, allowing us to react to the acceleration and giving us more time to manage the airplane’s behavior. The smooth application of power can minimize an engine’s wear and tear, too, but its principal benefit is allowing more time for the human to react to the changing configuration. An example of when this is most beneficial is the go-around, or balked landing.

So there you are, on short final. Your airplane’s manufacturer says the ideal gross-weight airspeed for final approach is 66 KIAS, but you’re light on both fuel and passengers, so you’re maintaining 64 knots in a steeper-than-normal descent with minimal power. The landing gear is fixed and you’ve added full flaps, using elevator trim to eliminate the control pressures. The pre-landing check is done and the airplane is ready for anything, from a smooth touchdown to a go-around.

Suddenly, without a radio call, that Skyhawk in the runup pad is taxiing out and starting a takeoff roll. You have to go around. Startled, the first thing you do is push the throttle full forward. The piston engine immediately goes to full power, and the nose starts coming up and yawing to the left. As the nose comes up, airspeed goes down and the nose yaws even further to the left. The airplane is in a nose-high, low-airspeed, high-power configuration close to the ground. What to do?

Unless you get the nose down soon, you’re going to stall a couple hundred feet above the ground, with little opportunity to recover. This might be an exception to the “don’t do anything quickly” maxim, but you’ve already jammed on full power, so it’s a bit late for niceties. You need to smoothly push the pitch control forward while adding right rudder pressure. This does two things: First, it starts reducing the wing’s angle of attack while stopping the airspeed from decaying further. Second, it begins to compensate for the torque, P-factor and gyroscopic precession. Timely corrections to the pitch and yaw controls, all while keeping the wings level, stop the nose from rising, the airspeed from decaying and the yaw from yawing too much. What just happened?

* Coordinate with rudder throughout the stall and recovery.

* Recover before reaching the critical AoA when practicing.

* Underestimate the amount of nose-down force you may need.

* Relax nose-down pitch-control input until the stall warning is eliminated.

* Attempt to recover with power alone before reducing AoA.

You just approached a trim stall, also known as an elevator trim stall. These occur when the airplane is in a low-airspeed, low-power configuration—as when landing—and trimmed significantly nose up. The application of full power without simultaneously applying substantial nose-down input on the pitch control raises the nose and reduces the margin between the wing’s actual angle of attack and its critical angle of attack. If allowed to progress, a stall is imminent.

A trim stall can occur with any airplane whose design results in a nose-up pitching moment when a substantial amount of power is added in a low-speed configuration. This type of aerodynamic reaction is common when engine(s) are mounted close to the airplane’s longitudinal axis. When the engine(s) are displaced from that axis, as with a Lake amphibian, for example, abruptly adding power without a corrective pitch input can force the nose down, not up.

Corrective control inputs, as alluded to earlier, can require substantial nose-down pitch input, perhaps at the limit of a pilot’s ability. Additionally, reducing power—or not adding so much to begin with—can help a pilot regain control. How to avoid this situation? 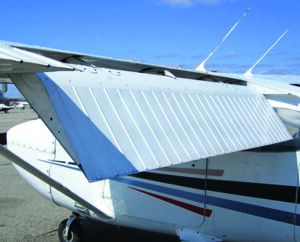 One answer is to not abruptly add full power when beginning a go-around. Instead, smoothly add enough to arrest the descent and ensure the airspeed doesn’t sag. You’ll likely have to exert a healthy push on the pitch control to keep the nose from rising too high. Retrim. Then, when you’re assured the airplane remains under control, add some more power, initiating a climb while also removing even more of the nose-up trim you added on final. Once a positive climb rate is established, ease off a notch of flaps.

Verify the airplane is still climbing and under control, retrim again, then ease off another notch of flaps. As the airspeed stabilizes well above approach speed, smoothly add full power and adjust the trim another time. Remove the last notch of flaps, if any. You may need/want to fine-tune the elevator trim at this time, but you’re climbing away from the runway in a clean configuration. The immediate problem is resolved.

One of the keys to handling this kind of go-around is not applying full power immediately. Another key is understanding the hefty push on the pitch control you need to use in keeping the nose down, even when flying a modestly powered airplane. As always, coordinate, especially with rudder to counter the yaw, but also with aileron to keep the wings level.