When an instrument-rated pilot thinks of an approach, he or she likely pictures a so-called standard instrument approach procedure, or SIAP, the published approaches we all have come to know and “love.” A SIAP is described in FAR Part 97 and in published charting data available from the FAA and Jeppesen, for example. Standard approach procedures are available for use by any operator with the appropriate equipment, unlike “special” approaches, which typically are for government, military or private use. Unless you’re flying for an operator who uses a special approach, when you fire up an electronic flight bag like ForeFlight or flip through a Jeppesen terminal procedures binder, you’re looking at a SIAP.

But it can be rare to actually use a SIAP, especially among personal aviation operators: The typical way an IFR flight ends is with a visual approach to the destination. The visual, of course, allows us to short-cut flying the full, published approach procedure while maintaining our IFR clearance. Although some visual approaches are charted—the Parkway Visual Rwy 13L/R at New York’s John F. Kennedy International Airport is what’s known as a charted visual flight procedure, or CVFP—it’s the exception rather than the rule. Other non-published approaches exist, too, like contact and radar procedures. Each is different and each has its own rules. Except for radar approach minimums and procedures like the Parkway Visual at JFK, none of them are published. But they all have their own rules and considerations.

Visual Approach Stuff You May Have Forgotten

According to the FAA’s Aeronautical Information Manual, “A visual approach is conducted on an IFR flight plan and authorizes a pilot to proceed visually and clear of clouds to the airport. The pilot must have either the airport or the preceding identified aircraft in sight” before being cleared for such an approach. The visual probably is the most common way to end an IFR flight, especially because it reduces everyone’s workload and typically results in shortening the distance flown.

It should be obvious that the pilot takes responsibility for traffic separation and obstruction clearance when flying a visual approach. For that reason, it sometimes is a good idea to back up the visual approach with an ILS glideslope or GPS-generated glidepath from a published approach with LPV or VNAV minima, especially at night. In fact, the FAA encourages pilots to use navaids or other means to ensure proper alignment with the runway when flying a visual.

As its name implies, reported or observed weather at the airport must include a ceiling at or above 1000 feet and visibility of at least three statute miles, e.g., visual conditions, before ATC will clear you for a visual approach. At an airport lacking weather-reporting capability, this can be verified if you have the field in sight from more than three miles out and/or greater than 1000 feet above the field elevation. Keep in mind that minimum vectoring altitudes apply, so ATC may not let you descend below a cloud deck to sight the airport.

Although you need basic VFR’s thousand and three to initiate a visual, you’re still on an IFR clearance, so VFR cloud-clearance requirements don’t apply. Operating specifications, personal minimums or some other factor may apply, however, so poking in and out of low clouds while maneuvering for a visual is frowned upon. With that in mind, because a visual is not a SIAP, there’s no missed approach procedure when flying one, so if you can’t complete the maneuver, you need to let ATC know ASAP. You’re expected to remain clear of clouds while awaiting further ATC clearance.

If you need to go missed while flying a visual at a towered airport, the tower controller will issue an appropriate clearance/instruction. If you’re at a non-towered airport and can’t land, do as you would at a towered facility: Remain clear of clouds and contact ATC—the approach controller in this instance—for further clearance.

Opting for a visual approach does not cancel an IFR flight plan, so a couple of things remain important. One, ATC will still separate you from other IFR traffic, which can mean delays or refusal to issue a visual approach clearance until the preceding aircraft cancels IFR. Second, you still need to cancel your IFR flight plan when arriving at a non-towered facility. Because separation is maintained, once you change to an advisory frequency, ATC doesn’t know what your deal is, so any following traffic—even if it’s not flying a visual—may be delayed. The sidebar on the preceding page has some additional details about visual approaches. 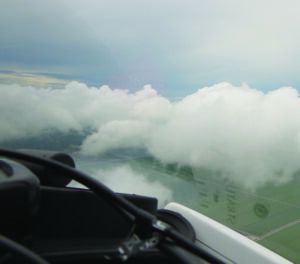 With weather minima like one mile and clear of clouds, it’s definitely an IFR procedure, requiring a clearance. Also, and unlike a visual, the contact approach is only available at an airport with a standard or special instrument approach.

An example of a contact approach being available when a visual isn’t can involve when ground visibility is reported as being too low for a visual/VFR approach but the flight visibility is clearly acceptable and the pilot has the field in sight, and can reasonably expect to continue to the destination airport in those conditions. If requested, ATC may authorize a contact approach. In other words, a contact may be your best bet if the field officially is reporting IFR but you can spot it far enough out. Because you still have IFR traffic separation—but not any protections against flying into obstacles or terrain!—it’s unlikely you would be cleared to follow an IFR aircraft on a contact approach.

As with the visual approach, the pilot assumes responsibility for obstruction/terrain clearance. Radar services, if any, will be terminated when instructed to change to a CTAF or control tower. When ATC is using vertical separation between aircraft, the pilot will be cleared to fly an “at or below” altitude at least 1000 feet below any relevant traffic. 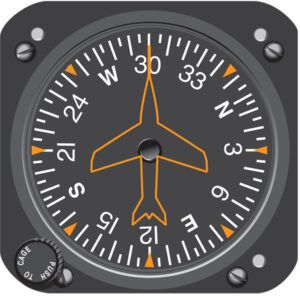 One flavor of the radar approach is the so-called “no-gyro” approach. It really should be called the “no-heading indicator” procedure, as attitude information isn’t part of the bargain. The AIM describes the no-gyro approach (and vectors) thusly: “A radar approach/vector provided in case of a malfunctioning gyro-compass or directional gyro. Instead of providing the pilot with headings to be flown, the controller observes the radar track and issues control instructions ‘turn right/left’ or ‘stop turn’ as appropriate.”

The cool thing about the no-gyro approach is that it can be easily simulated. All you need is a safety pilot or instructor. With the trainee under the hood, the right-seater calls turn direction and duration, all at standard rate. Once declared to be “on final,” turns are made at half-standard rate. The beauty of doing no-gyro practice is it might be as close to flying a for-real radar approach as you’ll get without living near one of the few locations where they’re still available.

A radar approach is pretty much what it sounds like: ATC uses radar to direct the pilot to a position and altitude from which a landing may be made at the destination airport. It’s important to note that a radar approach has nothing to do with the “radar required” notation on many SIAPs. Instead, the controller vectors the aircraft to align it with the runway centerline and keep it on course until the pilot can complete the approach and land visually.

There are two basic types of radar approaches: ASR (airport surveillance radar) and PAR (precision approach radar). The reason the word “precision” appears when describing the PAR approach is it offers a glidepath. That makes it a precision procedure, in the same sense as an ILS is a precision approach but the RNAV (GPS) flavor with LPV minima is a “mere” non-precision approach. And that’s the principal difference between an ASR and a PAR: When flying an ASR approach, ATC will provide minimum descent altitudes, perhaps as step-down fixes, in lieu of a running commentary on your descent rate.

According to the AIM, “A radar approach may be given to any aircraft upon request and may be offered to pilots of aircraft in distress or to expedite traffic, however, an ASR might not be approved unless there is an ATC operational requirement, or in an unusual or emergency situation. Acceptance of a PAR or ASR by a pilot does not waive the prescribed weather minimums for the airport or for the particular aircraft operator concerned. The decision to make a radar approach when the reported weather is below the established minimums rests with the pilot.”

The number of FAA-listed radar approaches has declined drastically over the last few years, today numbering only 112 sets of published minima. The sidebar above offers two examples and advice where you can find them.

It used to be that major airports and all U.S. Air Force bases offered at least an ASR approach. If you were lucky, the nearby AFB offered PAR and its controllers sometimes needed the practice, welcoming the occasional Skyhawk. These days, however, the pickings are slim if you want to practice or shoot one for-real. Which is a shame, because flying at least one is good experience and can help drag your bacon out of the fire some day down the road.

With reference to the published minima above for Jacksonville and Key West, note the PAR approach offered at Jax NAS gets you down to 100 feet above the touchdown zone. Other PAR approaches have similar minima, so if the chips are down, one’s turning and one’s burning, you’ve already declared minimum fuel and the spouse is crying, a PAR is the thing to ask for. 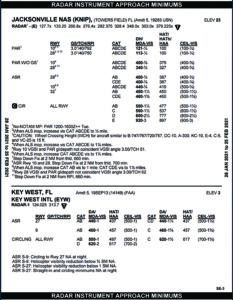 Formal radar approaches in the U.S. are few and far between these days. If you’re tempted to try one, you’ll need to find it first. If you’re still using paper approach plates from the FAA/Aeronav, the available radar approaches for the geographic region will be listed in the material at the front of the booklet. With an EFB, you may have to do some digging (Hint: ForeFlight makes radar approach minima available via the “Procedure” tab associated with specific airports. If no radar approach is listed, one doesn’t exist for that airport.)

Your best bet will be a military field, though some civilian airports, perhaps joint-use or co-located facilities, still have published radar minima. It used to be that controllers needed experience with them and welcomed GA pilots looking for a practice ASR or PAR. Ask away. All they can do is say “No.”