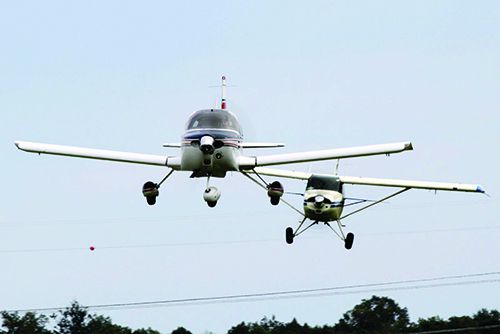 May’s article, “Defensive Flying,” was well-done and long overdue. It brought back vivid memories for most of us who have been in the air for awhile, me in particular. As a VFR-only aviator, I would have appreciated more emphasis on en route transitions, especially when one takes it for granted that they are all alone.

Many years ago, I was flying my Cessna 180 on floats in the middle of “nowhere” Alaska—about 100 miles from the nearest village. It was hunting season and the two of us on board were looking for game on the ground. As luck would have it, I looked up at the right moment and saw an image that is imprinted in my brain for the rest of my life: a one-dimensional view of a deHavilland Beaver, the round radial engine, pointed ends of the floats and the thin frontal image of the leading wing edges. The other pilot did not see us or we could have reacted in the same direction, but we missed a head-on by only 15 feet. The largest remaining parts would have been the engine blocks.

Ever since then I routinely tell my passengers, particularly non-pilots, that the thing we should be most concerned about is other airplanes and not to assume that I will see all of them. I request that all of us should keep our eyes out the window as much as possible. Those requests have been validated several times over the ensuing years. Since that incident, I am now a terrible game spotter.

Thanks! Look for an article on flying defensively while en route in an upcoming issue.

In May’s article, “Defensive Flying,” we’re once again reminded that the phrase “any traffic in the area, please advise” should never be used. In fact, in this article it’s so noteworthy that it’s in bold lettering and all caps. I have to ask, what is the reason for this adamant rejection of its use?

For example, what is the harm, if first tuning the CTAF at an airport that you’re approaching to ask about traffic that may be in the pattern and that you may not have heard because you are just tuning in to the frequency? This could be especially relevant when departing an airport and landing at another airport that is relatively close by and on a different frequency.

Would it really be an issue to ask that question and have the possibility of someone responding, “Be advised there’s traffic on downwind, and one on final?” It takes a second of radio time and can be argued that it increases awareness. If nobody responds, it doesn’t absolve you of your responsibility to be alert and aware, but if someone does answer, well that certainly can help. What am I missing? Thanks.

Thanks for the question. The emphasis we added to that quote from FAA Advisory Circular (AC 90-66B) was only in the bolding; the AC already had that text set in upper-case letters. And it’s not a full quote; the rest states, “Any traffic that is present at the time of your self-announcement that is capable of radio communications should reply without being prompted to do so.”

In other words, it’s FAA policy that we self-announce at the various points recommended in that sidebar, regardless of responses. The best solution is to make concise announcements at the recommended times. Then shut up and listen.

Another problem with “any traffic” calls on CTAF is that lack of a response tends to make us think there’s no one around. But there’s no requirement to have a radio, and we should always presume there’s traffic near the airport. An absence of evidence isn’t evidence of absence.

But I suspect the FAA’s main objection to the “any traffic” call is it doesn’t convey any information; self-announcing your type, position and intent does. The idea is that a self announcement will result in a response from nearby aircraft, also conveying their information. Not asking for “any traffic” saves a step for everyone, and we always need to self-announce, anyway.