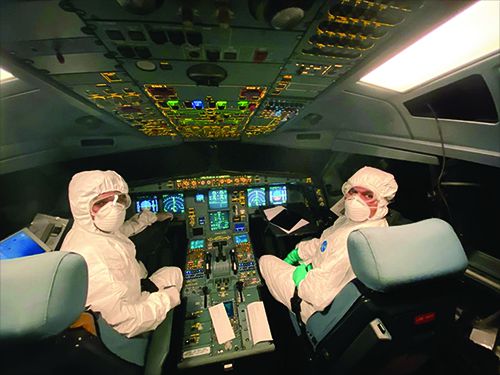 I probably don’t have to tell you that all segments of the aviation industry have taken a major economic hit as a result of the Covid-19 pandemic. Various sources report domestic air travel is down more than 90 percent year-over-year and that some 2400 jet transports have been grounded in the U.S. alone. Observers project a lengthy recovery but only after additional upheavals result in a smaller airline industry.

Metrics for general aviation are slower in coming but aren’t looking good. High-end operators like NetJets are cutting staff and postponing, at least, planned new-aircraft deliveries. Early indications are that business jet operations are down roughly 75 percent worldwide. The number of accidents listed on NTSB’s web site for April appear to be down by half compared with March’s total, though some may not have made it into the system yet.

Estimating the impact at the owner-flown level will take a while, thanks to a chronic lack of data only reported quarterly, but a personal observation is that activity in my neck of the woods is down by at least 50 percent. None of this is good, but it also shouldn’t be a surprise, given associated economic upheavals and the general public’s deserved aversion to being in closed spaces with others.

Putting aside all the current bad news, the question uppermost in my mind is whether and how the owner-flown industry segment will respond to the challenge of minimizing or eliminating the risk of contracting Covid-19 during flight training. I’ve seen a sharp uptick in the number of webinars and online ground-school events from the usual suspects but also from enterprising FBOs and what I consider new entrants into the training market. There also seems to be a related increase in virtual socializing among student pilots and flight instructors, primarily as marketing tools, but it’s unclear how successful or useful those efforts will be.

In-cockpit flight training is problematic when social distancing, so the FAA is cutting pilots a bit of slack on requirements like flight reviews and instrument currency, plus medical certificates. But only a bit. The article beginning on page 22 has details. There’s been little public discussion by the FAA or anyone else on what happens if the pandemic drags on and the granted deadline extensions expire. Will additional extensions be granted? Will the in-flight portion of a flight review be abandoned temporarily? Perhaps instructors will be allowed to sign off a flight review while observing from the ground or a chase airplane, akin to what the FAA allows when obtaining letters of authorization in single-seat jets and warbirds? Maybe real-time video, transmitted from the airplane to the ground? Will loggable online flight simulation be a new thing? Maybe we can use PC-based flight simulators to log approaches? Don’t hold your breath for any of that.

So, how can the industry (and the FAA) make flight instruction and checkrides safe again? There seem to be two basic problems with flight instruction as we know it at this time. One is the need to be in close proximity to another person, literally rubbing shoulders and sharing the air they breathe. Masks and gloves might be part of a solution, plus headsets and intercoms, but it all seems iffy. The other problem is what might be left behind in the aircraft cockpit by the previous pilot. Health-care professionals encourage us to sanitize our hands and doorknobs to prevent infection, but that’s problematic in almost any airplane.

Available guidance when sharing the cockpit or sanitizing our environment is long on “this should help” and short on “research demonstrates that this works in this situation.” Recommendations on sanitizing aircraft cockpits are scarce, although we note that Garmin has published guidance (Service Advisory 2051, Rev. A, March 20, 2020) on cleaning and disinfecting its aviation products. The gist of that guidance is reproduced below. Also, the FAA in April published a Safety Alert for Operators, SAFO 20009, which states in part to use “products that are effective against COVID-19, compatible with aircraft, and approved by the aircraft manufacturer” after each crew change. That’s…pretty vague.

What’s lacking is an FAA- or industry-approved protocol for ensuring the cockpit safety of pilots, instructors and examiners. Such a protocol should result from peer-reviewed research and testing, and involve manufacturers and health-care professionals. While I’m dreaming, it also must be detailed, relatively cheap, easy to implement and verify, and instill confidence. Until then, dual instruction may be a fond memory for many of us, who may soon be grounded for the duration.