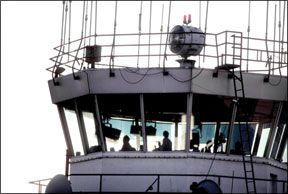 For anyone who knows me, or has subscribed to this magazine for very long, it shouldnt come as a surprise to learn I occasionally go off on an ATC-related rant. Usually, such a rant involves nonsensical-to me, anyway-instructions, a lost

clearance or worse. This column isnt a rant on ATC. It is, however, one on the pilots who make ATCs job more difficult than it has to be.

I write this on the weekend after AOPAs 2009 Aviation Summit concluded, just up the road in Tampa, Fla. I had the opportunity to attend and came away pleasantly surprised by the attendance level and, more importantly, the seriousness with which many I met approach their flying.

Early on the Sunday morning after the show ended, a close friend needed to get from my house to Tampa International to catch his human mailing tube home. Instead of a 1.5-hour expedition from my residential airpark by car, we turned it into a 15-minute hop in my Debonair.

The flight was punctuated by a very busy approach control frequency, especially for 0715 on a Sunday morning. Apparently, lots of AOPA attendees decided to get on the road early. This was even more apparent on the flight back home, through an ATC sector clearly saturated by, umm, FLIBs. Only two or three of them seemed to know what they were doing. Everyone else, Im ashamed to say, were (pick one or all) missing ATC calls, flubbing readbacks, failing to understand their clearances, ignoring the Notam associated with the event and generally making the controllers life a living hell. To the guys credit, he lost it only once, despite substantial provocation from unthinking pilots, while others in the facility worked behind the scenes to split the down-the-tubes sector into two. By the time I switched frequencies, things were headed back to normal.

Two things struck me, though. The first is ATC has good reason not to give those of us flying personal aircraft their trust and respect. We still have a long way to go before achieving anything like the consistency and professionalism to which we aspire.

Second, it should have been clear to anyone on the frequency there were too many aircraft making too many demands on one controller. In those circumstances, its counterproductive to request direct to your distant destination; it aint gonna happen. Likewise, failing to immediately respond to a call simply doubles the controllers workload and wastes everyones time. I could go on.

The bottom line is many of us just need to shut up and listen. Listen to the situation unfolding in your headset. Listen to the other aircraft and what theyre doing or being asked to do; you could be next. Most important, dont treat a saturated sector like your very own personal ATC system.

Listening seems to be a lost art among pilots. We need to fix that.