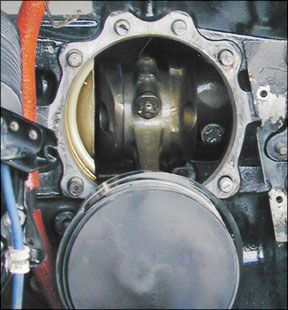 It was a beautiful October day. Clear sky, unlimited visibility, calm wind, smooth ride. My trusty 1960 Cessna 210 was humming along at 5500 feet, taking my pilot wife and me back home to Lebanon, Mo. (LBO). Suddenly, there was the deafening sound of silence from the front. The engine decided

to stop without so much as a cough, sputter or warning. Funny how busy one can get in a few short seconds in a now-quiet cockpit.

Boost pump on high, mixture full rich, switch tanks as my wife reached for the emergency checklist. We were about 20 miles from our destination. Maybe I could get the engine to start again, even for just a few more miles. My wife remained calm, although I could see the concern as she scanned the beautiful Ozarks hills and trees for an off-field landing spot.

Suddenly, the IO-470 came back to life, running very rough. Then it quit again about three miles later. Once more, after a little coaxing, it came back to life. But this time it was running even worse than before. Through it all, I had only lost about 500 feet and a straight-in to the airport from 5000 feet seemed like a really good idea. I announced my engine problem on the CTAF, dived at the runway and made an uneventful landing. We were lucky.

This story really began about three weeks before. The old 210 had gone through a very extensive and costly annual inspection. I had owned this plane for almost 20 years, had flown all over the country with little problem and knew every little noise, squeak and vibration in her. Coming out of annual, something just didnt feel right about her but, I just couldnt put my finger on what it was. I spent the next several days flying over the airport, checking and listening. Things seemed normal, still there was that “feeling.” I convinced myself it was just me, and that the work done during the annual probably resolved some long-time issue.

A couple of days later, we loaded up and headed out on a trip. Again the flight went smoothly. I was starting to feel better about the old girl and the $5000 I had spent on her. The return flight home was where this story ended with number one of the two cylinders just reworked during the annual trashed.

There are several lessons Ive learned. The most important, in aviation, when something does not feel right, trust your feelings. Take care of it before it can bite you. Also, review and practice the emergency procedures for your aircraft. One does not have time to stop and think when the engine decides to quit. You must react, correctly, to the situation immediately. Finally, an extensive and costly annual inspection does not always a safe airplane make. When coming out of any maintenance for that matter, expect and be prepared for the unexpected.