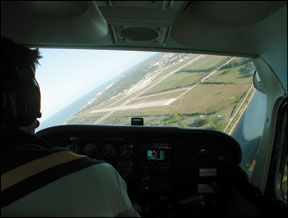 Recently, the AOPA Web site featured a video shot by Mooney pilot Dave Keller of an eventful takeoff. Unfortunately, the engine in Kellers Mooney failed shortly after liftoff on February 6, 2009. Fortunately for both the pilot and us, he had set up a video camera to record the flight. Equally fortunate, he was taking off from his home base, and was very familiar with the runway layout and the airplane.

Keller turned back to the departure airport, where he managed to land, deadstick, on a different runway. He emerged uninjured and the airplane was undamaged. The video presentation is available online at Video Online

It would be a mistake to use this event to advocate the so-called turnback maneuver as a reasonable response to engine failure shortly after takeoff in a single. Most observers, including AOPA and its AOPA Air Safety Foundation, as well as Mr. Keller himself, strongly cautioned against adding the turnback maneuver to any pilots bag of tricks. The reasons are many, and were extensively discussed by contributor Rich Stowell in a feature in our January 2006 issue. Richs article presented the results of a detailed study of turnback events, along with substantial simulation of the maneuver.

Two of the articles conclusions are important. First, practicing the turnback maneuver likely was responsible for the studys observed improvement in success. Still, executing the maneuver wasnt always successful in the study-landing more or less straight ahead always was successful, as defined under the studys terms.

Second, various turnback strategies were employed but, regardless of which was practiced or executed, its success rate failed to keep up with those events in which a straight-ahead landing was executed.

Another element of this discussion also is important to stress: Mr. Keller, at the time a 4700-hour pilot, has substantial experience with his airplane and flew it well. Its obvious from the video and accompanying discussion he immediately got the airplanes nose down, established an appropriate glide speed and practiced excellent airmanship. Although we dont know for sure, its also likely he established an optimum climb speed after takeoff. His Mooney is aerodynamically “clean” and glided well.

As Mr. Keller stresses, turning back after an engine failure is a high-risk maneuver. As Richs article stressed, practicing it, while improving the odds of success, dont guarantee them.

All of which is a lengthy way to tee up Tom Turners article this month on airspeeds you should know and nail. Among them are best angle of climb and the speed for handling an engine-out emergency in a single, and providing for the minimum descent rate. Mr. Kellers experience is the best recent recommendation for following Toms suggestions.