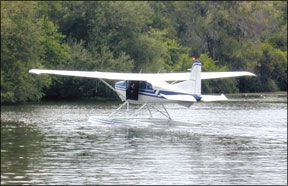 Last month, the stars finally aligned, the bank account wasnt empty for a change and I was able to accomplish something Ive been trying to work in for more than 10 years: add a seaplane rating.

Though I had some seaplane stick time, it was long ago and far away. So, I went into it more or less from zero. It was a great learning experience, and will make me

a better all-around pilot. Getting a seaplane rating isnt for everyone, of course, but the basic idea of spending a couple of days doing intensive training-especially for something youve never done or in an airplane type youve never flown before-is an excellent way to knock off some rust. Along the way, you might learn a few things useful later on. Another good thing about an add-on rating, of course, is it also resets the 24-month flight review clock.

Youve probably read one or more urgings in pages similar to this one about how to use the BFR requirement to your benefit. Its all true, and a good idea next time you see the end of the 24th month approaching. But it doesnt have to be a seaplane rating you go after.

For example, most of us are still flying around behind a set of steam gauges while an increasing number of pilots are fluent in “glass-speak.” We can debate the merits of glass vs. steam until all the 100LL evaporates, but the bottom line is glass is here to stay. And, even if all you do is fly around the patch every other Sunday afternoon in your 150, you will still need a BFR. Instead of saddling up Old Paint, why not get a couple of hours of dual in a G1000 Skyhawk instead? Or, maybe a DA40? Maybe knock out a transition to complex airplanes? Its not an add-on rating, but youll still learn lots.

The same is true-perhaps more so-when adding a tailwheel endorsement. (Yes, we know endorsements dont count as a BFR, but as long as you work it all out with the CFI ahead of time, you can get both.) You might end up with a few more dollars out of your pocket by going after a new endorsement or rating, but by the looks of things lately, none of us have been flying as much as we did even two years ago. Spending a little more time, effort and money wont hurt your local flight training operation and certainly wont be detrimental to your skills, either.

As we were putting the finishing touches on this issue, news came of a mid-air collision between a Piper PA-32R-300 and Eurocopter AS350 operating as a for-hire tour over the Hudson River off New York City. The PA-32R apparently had just departed nearby Teterboro Airport, heading to Ocean City, N.J. Sadly, all nine aboard both aircraft-two brothers and a teenager in the Piper, plus a pilot and five Italian tourists in the helicopter-were killed.

Its way too early to know what caused the accident, but two aircraft were in the same airspace at the same time. Predictably, popular media outlets expressed their usual outrage and called for closing the airspace to “those little airplanes,” conveniently ignoring the automotive carnage nearby.

Until the NTSB investigates, no one will know for sure what happened. But wed guess a lack of real-time information on the volume and location of traffic in the area may have played a part, along with inadequate guidance for fixed-wing pilots

from out of town. That said, it might be time for users and the FAA to come up with a set of formal, published procedures accommodating fixed- and rotary-wing aircraft in the area. Maybe reducing the Class Bs impact would help, too.

Some of that already has been accomplished. The back side of the New York Terminal Area Chart is printed with a Helicopter Route Chart, depicting rotorcraft altitudes, routes, self-announce frequencies, and even recommended speeds (do not exceed 140 KIAS). Transient fixed-wing pilots may think little of that information applies to them because…well…theyre not driving a helicopter. Notably, theres no similar information for fixed-wing pilots wanting to fly through the area; theyre left to their own to avoid the copters and the Class B, all while navigating the busiest airspace in the world. Its a wonder more collisions havent occurred.

In fact, there are any number of unwritten rules applying to various pieces of airspace around the country. Over the Florida peninsula, for example, IFR FLIB drivers can throw away the hemispheric altitude rules. Instead, northbound flights get an even or odd altitude (I forget which); southbound flights the other. Transiting within some undefined distance of terminals like CLT, STL, CVG, ORD while committing IFR but clear of the Bravo is guaranteed a re-routing. And then there are the letters of agreement (LOAs) between various facilities dictating over which fixes and at what altitudes they want IFR traffic. None of this stuff is written down, although so-called “T” routes have been established to help low-altitude IFR flights around the terminals.

For years, the FAA has resisted making LOAs available to the public. Nowhere have I found the Florida altitude “rules” published; a controller recently explained it to me (on the frequency, hardly an efficient use of his time).

One of these days, the FAA may figure out its to everyones benefit to write down this stuff and make it available for pre-flight planning. Until then, lets be careful out there.