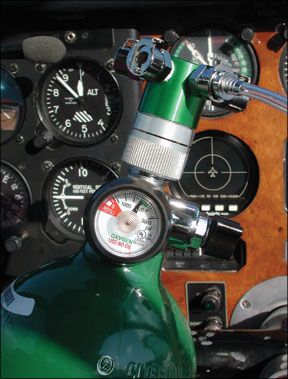 Not so long ago, when using oxygen in the cockpit graduated from the nice-idea to the must-have phase, the equipment took a quantum leap forward. In case you havent looked recently, state-of-the-art oxygen gear is better than ever, so good in fact that it may be time to toss that converted medical junk and upgrade. But what to buy? If your portable system dates back to the days when Loran was the hot choice for navigation, theres no need to spring for a complete new system to

benefit from the latest stuff-a cylinder is a cylinder. Instead, upgrading some basic components will make using oxygen easier and cheaper.

Sister publication Aviation Consumer recently took a close look at some of the latest products from the top oxygen suppliers in general aviation. What they found was more choices in regulators, flowmeters, cannulas, masks, conservers and monitoring devices, all at competitive prices. In fact, the industry has almost reinvented itself over the last 10 or so years, due in part to advances in the medical market. Just as improvements in consumer electronics have resulted in better, more-capable avionics, those medical advances mean higher-quality and easier-to-use oxygen systems are more accessible than ever.

Once oxygen is in a portable cylinder at something like 2000 PSI, you need some means to reduce the pressure to breathable limits. Regulators perform this function by stepping down the high cylinder pressures closer to the values youd expect when inflating the airplanes tires. Regulators also distribute the oxygen to more than one user, depending on how many hose fittings they accept. Older designs, with push-and-twist quarter-turn fittings-like a BNC connector-could be difficult to connect and disconnect. Not the new stuff.

The latest regulator designs offer a more positive locking and release mechanism; we doubt wed be fumbling around to ensure all the plumbing was connected in the midst of a high workload situation while at high altitude. Aeromedix.com and Precise Flight have metal connectors, while Mountain Highs are Delran, a hard, nylon-like plastic.

For lack of a better description, Mountain Highs FPR (four-place regulator) is shaped like a tulip, with the flowers upper third lopped off, producing a flat surface, which is where the outlet hoses connect. We liked its aesthetics more than the green-anodized regulators offered by the competition. For one, you can see that all hose connections to the regulator are fully seated at a glance and, for another, you can get a finger on the disconnect plungers without twisting or turning the whole tank. That can be a pain in a tight cabin. Regulators from both Aeromedix.com and Precise Flight featured the same kind of connectors, but located around the regulators circumference, not its top.

These standard regulators are constant-flow: Oxygen not inhaled is wasted. By contrast, and as their name implies, conserving regulators only flow oxygen when demanded by the user. While O2 is relatively cheap-and many options exist for owners to reduce those costs even more-its not always available at far-flung destinations, and the ability to stretch a limited supply among several people can come in very handy, make conserving regulators popular. One example is Mountain Highs EDS O2D2 two-person electronic oxygen-conserver, a battery-powered device (with a 4.5-volt external power option) about an inch thick, slightly wider

than a card deck and weighing a couple of pounds. Keep in mind that this isnt a regulator; you still need one of those to reduce pressure into the conserver itself. Two electromechanical buttons select the desired oxygen flow, with predetermined mode settings for certain altitude ranges, masks instead of cannulas or if more O2 is needed on a spot basis.

Precise Flights PreciseFlow is a single-user conserving regulator of similar shape and color-green-as the companys other oxygen equipment. The device performs the same function as the Mountain High O2D2, but without the batteries. It also weighs about the same. It has a single control knob: Rotate it to one position for conservation, and 180 degrees to the other for constant flow. Along the bottom is a dial marked for altitude. Altitudes above 18,000 feet are marked differently, denoting the FAAs strong desire that you wear a mask at those cabin altitudes and not a cannula.

The trick to a conserving regulator is users may need to make a more conscious effort to breathe. Gentle inhalation may not trigger a conserving regulator. In one test, an editor wrote, “By design, if we held our breath, inhaled through our mouth or didnt inhale deeply, no oxygen flowed.” For some, being forced to breathe deeply through a cannula for hours at a time might be too much work.

The FAA recommends cannula use only up to 18,000 feet; above FL180, were supposed to be using a mask, even if many pilots simply ignore this recommendation. Below that altitude, conserving cannulas have become ubiquitous because they really do save oxygen.

The latest conserving cannula designs comes from Chad Therapeutic and carry the Oxymizer brand. These newer products differ from the older ones mainly in color: Theyre a neutral color, almost translucent, rather than the light beige of the older models. Cannulas of this type are available from many vendors.

Regardless, the way they work hasnt changed: Between inhalations, a reservoir is filled with exhaled air. Until you inhale again, that air is enriched or replaced with fresh oxygen flowing through the hose from the tank. At the beginning of your next inhalation, a diaphragm collapses, delivering a bolus-burst-of oxygen-enriched air to the lungs.

Basic masks havent changed much, but the high-end masks are pretty slick these days. Precise Flight has introduced its Precise Flow Oxygen Mask with mic, including a version that works with conserving regulators. Its made from a flexible blue silicone material, and includes a built-in microphone with about three feet of straight, uncoiled cord, terminated in a standard aviation mic plug. The same basic mask is available from other sources, Mountain High among them.

This mask is much better than the so-called standard masks most of us have used. For one, its stouter straps mean we can cinch it down tight to prevent oxygen leakage and not have to worry about the straps breaking. For another, its made of thicker material and likely will stand up to regular cockpit abuse much longer. Finally, it has a higher-quality feel to it when compared to the older masks. So, naturally, it costs more. If you regularly exceed FL180 in an unpressurized cabin, or simply prefer a mask to a cannula, these are worth checking out.

As their name implies, flowmeters allow you to adjust the volume of oxygen

received from a constant-flow regulator for altitude and physiological needs. A flowmeter is simply a needle valve mounted in a plastic case, with oxygen flow limited by the valves position. The case is marked in either altitude or liters per minute, with a small floating ball in a calibrated column indicating flow level. (In the industrial world, these are known as floating ball rotameters.)

Precise Flights better idea is the A-5. We liked this product. Its an evolution of the A-4 and, like its predecessor, marked for both a standard cannula and mask as well as conserving cannulas. The same scales are screened onto both sides and it has a smooth, positive feel to its valve. A relatively large knob-compared to the A-4 flowmeters-plus label space for recording its in-service month and year-round out the package. Its made in a translucent blue, with a black ball running up and down in the center. Its a definite improvement over the A-4.

Another flowmeter we like is the E-Ox Flowmeter from Aeromedix.com. Its made of a solid billet of clear acrylic, drilled and tapped for inlet/outlet fittings. A scale marked in liters per minute, not altitude, is screened onto one side, providing reference for the ball floating inside.

Its beautifully crafted, but its also larger and heavier than the other flowmeters we tried. A relatively short hose between the flowmeter and tank means that most of that weight will be closer to the regulator, minimizing potential hose tugs.

Kudos to the oxygen vendors for not standing still. The newer gear represents meaningful improvement in usability, safety and durability. The only real problem is no single vendor has gathered together all the latest and greatest products and put them together in a money-saving package deal. As such, were inclined toward a mix-and-match approach. For standard flowmeters, we would go with Precise Flights A-5s. In fact, we would recommend replacing older A-4s with these units. Theyre really a terrific product. For a constant-flow regulator, we like Mountain Highs four-place design.

How about a conserver? For a single place application, the PreciseFlow makes the most sense. But if two people need O2, Mountain Highs O2D2 is more cost effective. Also, it has audible alarms, which the Precise Flow lacks. Finally, and though we have an el-cheapo mask, Precise Flights Precise Flow Oxygen Mask with mic sorely tempts us. Its a secure, confidence-inspiring way to oxygenate.

Using supplemental oxygen is a good idea when spending a few hours at altitude, or pretty much any time at night. Doing so used to be cumbersome, but not any more. These newer products can make your flying safer and more comfortable. And those are good things.