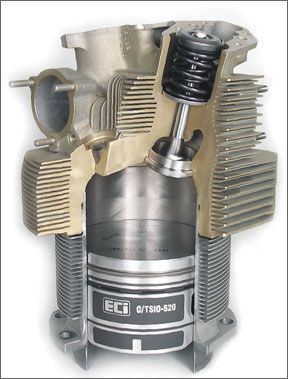 Every so often, it becomes apparent the general aviation industry suffers from some kind of systemic problem affecting its underlying infrastructure. A few years ago, first Continental and then Lycoming discovered issues with new crankshafts. A few years before that, it was Cessnas failure to properly prepare its new airplanes for a different paint technology, which resulted in widespread corrosion until they were stripped and properly repainted. Now, its cylinders.

And its nothing new, either. In 2004, some 2000 cylinders manufactured by Engine Components, Inc. (ECi), were the target of an airworthiness directive (AD). Another AD, effective September 9, 2009, targets an estimated 8000 Superior Air Parts, Inc. (SAP) cylinders installed on big-bore Continental engines. And in July, Continental was forced to revise a recent service bulletin adding more cylinders to a recall program it established in February. To its credit, Continental is replacing cylinders subject to the new service bulletin at its expense. (Full disclosure: My airplane is equipped with SAP cylinders subject to the new AD.)

For many years, those flying behind or between Continental factory cylinders accepted the fact they likely would perform a complete top-end overhaul about halfway through their engines TBO. Soon, shops learned about reaming new cylinders valve guides and operators learned about lean-of-peak EGT operations. Many problems went away.

When I overhauled my engine several years ago, I specified new SAP cylinder assemblies because operational evidence accumulated by people whose opinion I respect demonstrated they were the best available for my engine. I stand by that decision-my cylinders show no signs whatsoever of distress at this time. Additionally, its interesting to observe one of the issues cited by the FAA in the SAP AD-fatigue cracks-occurred to one of the cylinders in my old engine, completely ruining an otherwise perfect day. Those were ECi cylinders, which were never subject to an AD.

The larger problem here isnt cylinders, or even quality control (although quality control is an issue). Instead, its these kind of problems keep happening in a supposedly mature industry. After-what, 75 years?-of manufacturing air-cooled aircraft engines of the same basic configuration, we should know by now how to design and build cylinders immune to cracking, to barrel demating and to other failures.

Its no wonder at all why student starts continue their downward trend, why those who “get the bug” too often fail to earn the private certificate and why so many rated pilots often just fade away. Were doing it to ourselves.