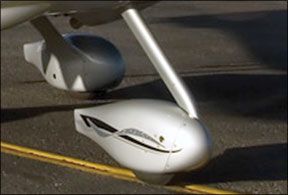 degradation to the components structure existed prior to failure.

Including the original, Sundstrand manufactured all four pumps (p/n 025323-150). The first two pumps were overhauled by a California company; a company in Texas overhauled the third functional pump.

The nosewheel pant was reported damaged after landing. Inspection revealed the upper left arm on the nose strut (p/n 11907-005) was seriously cracked. This crack ran from the top of the arm (just forward of the strut data plate) through the entire arm, and stopped at the bottom where a gusset was welded. This crack continued to run parallel to the gusset for approximately 0.50 inches. The nose wheel stop and nose fork also were damaged.

The roll-trim actuator malfunctioned on three occasions since purchasing the aircraft new in 2002. In each case, the wires leading to the electric motor had come loose, causing the trim actuator to hold full left aileron.

The fuel selector valve (p/n 3610021) seized in the “off” position. The failure was caused by corrosion on the selector valve shaft where it passes through the upper valve housing. No provision is made to prevent spilled liquids or carpet-saturated moisture from entering the upper housing valve shaft bore.