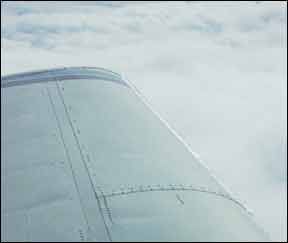 For those of us in the Northern Hemisphere, winter has arrived. Parts of the U.S. already have seen their first snowstorm of the season and some fair-weather pilots have resolved to hang up their headsets until spring. That’s unfortunate, since winter flying offers some of the most satisfaction pilots can have.

Think about it: The air is colder and denser, so the aircraft performs better, the air is clearer, so you can see farther, and fewer of your peers will be clogging the traffic pattern. Flying over a snow-covered countryside can be a special treat, too.

As long as you keep the ice and snow off the airplane before launching, use a decent engine pre-heating system and carry some warm clothes—just in case you “land out”—winter flying has a lot going for it. Too, some airports—those formed only when a lake freezes over—become available for ski-equipped airplanes and those who don’t mind nil braking action. It’s all good.

Yes, there are some downsides. The aforementioned ice and snow on an airplane tied down outside comes to mind, as does the need to plow or shovel a path to the taxiway or from in front of your hangar. Ensuring the airplane is clean and dry before takeoff is a must. Equally important is checking inside control surfaces for liquid water before taking off, since it can freeze and bind controls at colder altitudes. When taxiing, use minimum power, especially when visibility is poor, or you can stomp on the brakes only to find you’ve been taxiing on ice. Leave the gear down a little longer after takeoff before retraction, to help blow off any ice or slush that accumulated.

Flight planning can present new challenges, also, with stronger headwinds. The colder air and greater engine power can also mean higher fuel consumption, something to keep in mind with a bunch of knots on the nose. Mountain-generated turbulence can be a big deal, also, but you know better than to play around downwind of tall peaks. Those same stiff winds can make takeoffs, approaches and landings more challenging. It’s a good idea to bone up on your crosswind skills early on.

For most of us, the only real trick to winter flying is dealing with in-flight airframe icing. In addition to Airmets Zulu and timely pilot reports, some really good forecasting tools have been developed over the last few years. Take advantage of them before even heading to the airport. And if you find some ice, don’t wait around to get out of it. Be sure to file a Pirep.

Meanwhile, none of this winter weather is permanent. In a couple more months, once the days start to lengthen again, we’ll start seeing signs of spring, when all the rusty pilots come out of hibernation. Which will you be?