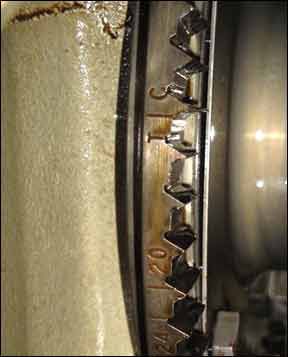 Inspection of the sidewall structure revealed a failed crosstie at fuselage station 227.125. The part cracked fully in two pieces and is deformed from its original flat shape, apparently from compression. Two rivets immediately above the break have failed. No other crossties (p/n 101-420013-1122) display any deformation, cracking or evidence of preload.
Part Total Time: 8186 hours

The hydraulic landing gear power pack motor (p/n HYC5005) failed during initial gear retraction after takeoff. The aircraft made a successful gear-up landing. Investigation determined the failure was due to fracture of the solder joint attaching an electric motor brush pigtail to the brush holder. The broken solder joint created enough heat from high resistance to discolor the brush holder and anneal the brush spring. The power pack had been overhauled 29 months/142.5 hours earlier.
Part Total Time: 142.5 hours

Upon inspection, several cracks in both wing spars were found. One spar was intentionally broken to show the extent of the vertical crack. This aircraft has 185.8 hours and nine years in service since restoration. At some point before the previous fabric replacement, it apparently had been ground looped onto both wings. We have now replaced all four spars due to questionable wood.

The Cessna 172S in which this engine was mounted exhibited oil streaming down its belly and dripping from a drain tube below the firewall, which is connected to an overflow fitting on the engine-mounted mechanical fuel pump (p/n LW15473). The pump was disassembled and oil was found leaking through the first of two diaphragms in this dual-diaphragm pump. The rubber material covering the diaphragm’s base was flaking off.
Part Total Time: 2518 hours

Upon removing the alternator for inspection, all of the teeth on the crankshaft gear (p/n 632018) face were either missing or severely worn.
Part Total Time: 1150 hours