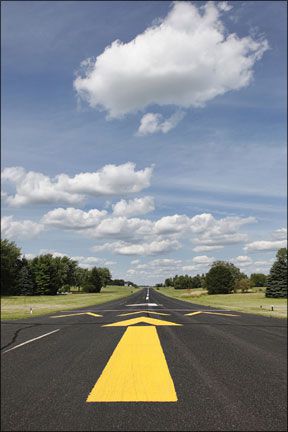 About the time this issue hits your mailbox, the FAAs standard phraseology for taxiing onto an active runway and stopping to await takeoff clearance will change. Instead of “taxi into position and hold,” the new instruction will be “line up and wait.” The change goes into effect September 30, 2010.

This is similar to the mid-1990s switch from the FAA-standard set of weather reporting and forecasting abbreviations to the METAR/TAF format. The FAAs set of abbreviations had been in use since at least the 1960s, and probably going as far back as the 1930s. That change, also, was mandated by the FAA in the name of compliance with international standards and enhancing a foreign pilots ability to obtain and understand U.S. weather information.

According to the FAA, the change “is to help simplify and standardize ATC phraseology, as well as to comply with International Civil Aviation Organization (ICAO) standards.” By way of explanation, the FAA maintains, “[l]ine up and wait has been in use by a majority of ICAO contracting states for many years. It has proven useful with many non-native English speakers, who can sometimes confuse position and hold with similar-sounding phrases like position and roll.” To which we respond, “Blowing snow.”

Has anyone, anywhere, ever used the phrase “position and roll?” I didnt think so. If its used in other countries, perhaps they should be the ones to change their phraseology, not only in the interest of “international standards” but also safety.

A lot of would-be pilots come to the U.S. for their training. Even after travel, lodging and meal expenses are added up, its often much cheaper to “get it done” in the U.S. than in their home country. We in the U.S. should be thankful for the additional economic activity, which helps keep our own expenses lower than they could be, and that we enjoy an environment in which we still can fly with relative freedom. We also should be thankful English is the international language of aviation, even if French seems to be the one from which many METAR/TAF abbreviations were derived.

But this change fixes something that wasnt broken. I have relatively little international experience, but subtle differences in procedures and phraseology abound when compared to U.S. practices. Which of them are correct?

A lot of people are acting as if this change is the end of the world. It isnt even close, but the FAA hasnt done us any favors by apparently rolling over so easily in favor of ICAO standards. Maybe next time, just for grins, the FAA will put down its foot and say “No.” We wont hold our breath.