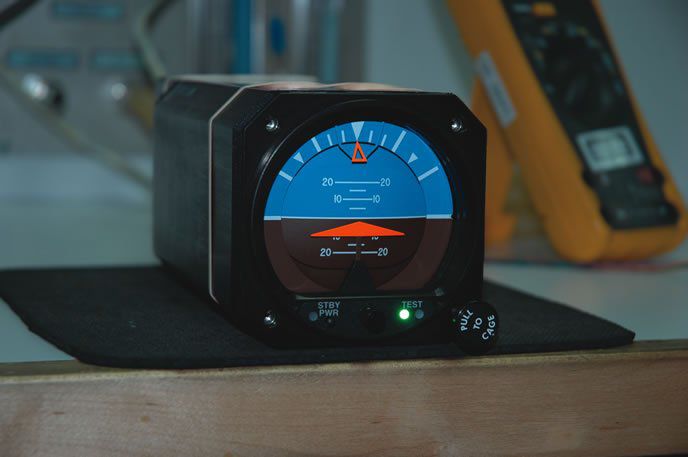 I was out recently with a friend/neighbor/CFI, brushing the rust off some basic skills. After 20 or so minutes of slow flight, stalls, steep turns and some erratic, uncoordinated maneuvers purporting to be Lazy 8s, we rolled straight and level for a few minutes to chat and move away from a cloud deck.

With the wings level, I glanced at my “steam-gauge” instrument panel to check things and noticed the vacuum-powered artificial horizon indicating a 20-or-so-degree bank. The vacuum gauge was at the bottom of its green arc. Either is an early sign of an issue with the vacuum system and/or the instrument.

Meanwhile, the electric-powered artificial horizon I installed some 15 years ago as a backup was correctly indicating the airplane’s attitude. If I had been in the clag with these indications, confirmed by other instruments, the backup horizon would have become my primary and I would have disregarded the vacuum-powered version, perhaps covering it with a sticky note or a suction cup designed for the purpose. The now-primary “backup” instrument easily would have gotten me safely on the ground and, if needed, I also would have been safe and legal to depart IFR again.

These days, new airplanes with so-called “glass panels” come from the factory with some sort of backup instrumentation. When adding glass to an older airplane, backing up flight instruments is easier than ever: just retain the vacuum system. And free or low-cost apps for your smartphone/tablet computer leverage the hardware’s sensors to depict a usable artificial horizon. For something more substantial, an all-electronic back-up instruments with built-in batteries also can be installed. Going the app route for your backup is problematic, thanks to the need to load and configure the software before takeoff—or when something in the panel fails and you’re suddenly very busy.

If you’re flying IFR regularly but your panel doesn’t have an installed backup gyro, you seriously should think about one. Many options are available on the market, from the electromechanical instrument I have to solid-state glass gauges that fit into a three-inch hole and can provide a miniature primary flight display when connected to other systems.

When upgrading your steam panel to glass, definitely plan for and retain some kind of backup instrumentation. The idea is to use both traditional power sources—electrical and vacuum/pressure—to ensure failure of one won’t impact the other. An installed backup is ready and waiting whenever you need it. A tablet-based app, not so much. And the app truly is a backup: It isn’t legal as primary, so you lose the redundancy and dispatch reliability of an installed instrument.

As the accident record has shown, vacuum- and gyro-system failures can be fatal. Thanks to technology, they’ve also become more rare.