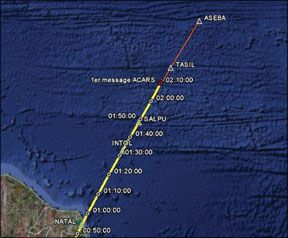 Frances equivalent to the NTSB-the Bureau dEnqutes et dAnalyses, or BEA-on July 2 released its interim report on the loss of Air France Flight 447, an Airbus A330 that crashed into the equatorial Atlantic Ocean early on the morning of June 1. To geeks like me who pore over these things, the interim report is extremely

valuable in assembling and organizing in one place many-but not all-of the known facts about this tragedy. It is not, however, a final report and does not state a probable cause for the accident. Its initial findings and some of its details, however, are important. Just as important? The interim report highlights how clueless officials are in understanding what went wrong and how it might be prevented in the future.

Primary evidence thus far comes from a series of ACARS (aircraft communications addressing and reporting system) messages, the few bits of found wreckage and the condition of recovered bodies. Using those resources alone and trying to determine why a modern transport operated by a world-class carrier crashed into the ocean isnt for the faint of heart. Until the cockpit voice and flight data recorders (CVR/FDR) are found, investigators have very little with which to work. Still, in reviewing the interim report, Im struck by whats in it, as well as by its omissions.

For example, the BEAs English-version interim report uses four pages to explore the miscommunication between Brazil, Senegal and other nations ATC systems-plus Air Frances Operations Coordination Centre-and resulting delay in determining the flights status and launching initial search and rescue efforts. While relevant to ATC coordination issues someone may wish to address soon, that material doesnt explain the crash sequence.

Similarly, the interim report notes, at “this stage of the investigation, the BEA has not yet had access to the autopsy data” resulting from examination of passenger and crew bodies found so far. Why? One source points out the autopsies are being conducted by Brazil, and France has not yet formally asked for the data. Another points out its likely some portions of the interim report likely were prepared in the days leading up to its release, and not all statements in it were current at publication. This and other comments by BEA continue what many observers, including me, consider a disturbing trend by the French to minimize Brazils knowledge, expertise and efforts.

To its credit, however, the BEA goes into great detail on the ACARS messages received in the flights last few minutes, their timing and their relative significance. Thankfully, one of those messages is a routine position report, one placing the flight slightly left of course at which is widely believed to be the beginning of the accident sequence. The 23 other ACARS messages detail warnings and faults the crew experienced. As the BEA states, “At least one of them corresponds to an inconsistency in the speed measurements,” meaning the crew and the airplanes automation were unsure of its airspeed.

The interim report notes at least three ACARS messages have yet to be fully interpreted: “This message has not been fully explained at this stage of the investigation.” Why these messages have not been interpreted is anyones guess; it would be appropriate for the BEA to say why theyre not explained and to publish the explanation when its available.

The interim report also details some of the conditions experienced by three other airliner crews flying through the area at roughly the same time. Significantly, all three crews elected to avoid the convective weather Flight 447 apparently entered.

Nevertheless, the BEA indicated it is focusing on erroneous airspeed indications as a precipitating event. The BEA has asked “Airbus, the NTSB, IATA, the DGAC and all French operators” for data on any incidents “during which a loss or inconsistency of speed indications was observed or reported by the crew” while in cruise.

Initial findings from the interim report help us understand the BEAs future efforts. Noting the wreckage found so far “consists mainly of light items” from within the cabin, plus some external parts of the plane and secondary control surfaces, the BEA concludes “identified debris thus comes from all the areas of the plane.” In particular, the vertical stabilizers damage indicates it broke off from the fuselage “during a forward motion with a slight twisting component towards the left.”

The BEAs final initial finding states, “visual examination showed that the airplane was not destroyed in flight; it appears to have struck the surface of the sea in a straight line with high vertical acceleration.” The translation from French is a bit awkward but this phrase is taken to mean the aircraft hit the ocean in a relatively level attitude, and at a high rate of descent with relatively little forward motion.

Unless the CVR/FDR are located, retrieved and their data analyzed, the few clues gleaned so far wont tell us much. We may never know exactly why the crew decided to enter weather everyone else was avoiding, why there were erroneous airspeed indications and how the airplane ended up hitting the water in a high descent rate. Like the rest of us, the BEA is clueless.