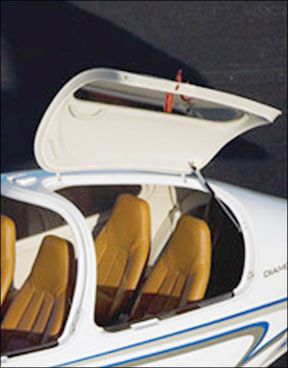 The rear seat (p/n 7-1500; revision B) failed at the left hinge point. The AN3 series bolt pulled through the hinge lugs, which are welded to the seat frame bottom. The right hinge holes show elongation, but remained intact. This aircraft was doing spin training at the time of the incident. Modifying the seat frame to current standards is recommended.

Repeated cracks have been found on the propeller bulkhead at the edge of the washer footprint. A material or hardware change may help resolve this problem.

Propeller bulkhead p/n: 0552231-1. According to the FAA, there are at least 15 similar entries in the agencys SDRS database.

When retracting the gear after takeoff the pilot heard a loud “crack” and the nose gear would not retract. The aircraft landed with the nose gear trailing aft; it collapsed (at touchdown). Inspection revealed the rod end under the pilots floor connecting the retract rod to the bell crank separated, causing the nose gear to become disconnected from the landing gear transmission.

During a routine inspection, the technician encountered difficulty removing the left main gear wheel assembly axle retaining nut. He stopped and deflated the tire. The wheel was then easily removed. The wheel was found to be severely corroded, with all but one wheel-half retaining bolt had failed. The wheel had last been disassembled 217 hours earlier.