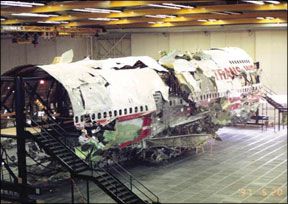 In 103 years of powered flight, the aviation community has successfully evolved a set of highly developed and scientific methods for investigating accidents, examining their root causes and making results-based changes in the hope that future, similar events will be prevented. Integral parts of our accident investigation system is its introspection and dedication to a single, worthwhile objective: enhanced safety. That this system works is evidenced by steady accident rate reductions and the general publics matter-of-fact approach to air travel.

But this system only works if its objective remains identifying and repairing faults in design or operation. When the system becomes a political tool, for example, and obstacles to finding the root causes of an accident are erected, everything and everyone suffers.

In the U.S., the best example of politicizing an aviation accident is the investigation into the loss of TWA Flight 800, a Boeing 747 that exploded in mid-air over Long Island Sound on July 17, 1996. Say what you will about alternate

theories for the flights loss, early preemption of the NTSBs investigation by the FBI wasted several months of time, effort and money before aviation safety professionals once again were allowed to sift through the facts and identify a probable cause.

Sadly, much the same thing is happening again in Brazil. As the article beginning on page 21 explores, that countrys authorities are dealing with a major blow to their national pride: the September 29, 2006, mid-air collision involving one of its newest airliners and one of its finest exports a brand-new Embraer business jet over the mazon jungle.

Compounding this tragedy has been treatment of the Embraers crew, Americans Joseph Lepore and Jan Paladino, who successfully landed their damaged jet at a military air base after the collision. Only in mid-December did authorities return the twos passports and allow them to leave Brazil for the U.S. But their release was accompanied by accusations of endangering air safety, a criminal charge carrying a maximum sentence of four years imprisonment.

If the same accident occurred in the U.S., its likely that heads would roll at the FAA and elsewhere. And justifiably. But such recriminations would occur only after a detailed, exhaustive investigation was conducted, free from hints of criminalization.

The threat of criminal charges accompanying any aviation accident investigation is chilling. Not only is it a diversion from finding the tragedys root cause, but it engenders a different agenda, one that does not have as its first objective preventing future accidents. The sooner Brazil and other nations realize this and embrace the idea that aviation safety cannot be enhanced in a politicized environment where criminal threats overshadow everything, the safer we all will be.