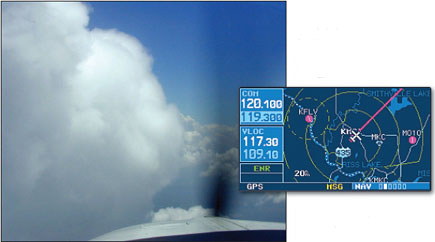 When Lord Baden-Powell, founder of the Boy Scouts, once was asked what “Be Prepared” meant, he replied, “Be prepared…for any old thing.” As it is with the Scout motto, so it is with flying. As one example, if the oil pressure is zero and that matches the tachometer, and you see flames peeking out from the cowling hinges, its not a good time to start looking for a place to land-youd better have one already in mind, and be on short final.

That kind of severe trouble doesnt happen very often-thankfully-but because its such a big deal, we should always have that emergency landing field in mind. Not only, though, do we need to be able to land – we need to know when landing is the right decision. Thats what situational awareness is really all about: not only knowing where you are but how well youre doing.

All along our route (not just near the destination), we should be preparing to land. To that end, charts, GPS data, plates-everything needs to be where we can find it, right away. Cockpit organization is key-as alternates fall behind (and out of easy gliding range), we can clean up those approach plates, maintaining our first, second and even third choices for diversions without having to sort through clutter when were least prepared to deal with it.

How does a pilot fly a cross-country in IMC and maintain situational awareness? How can we ensure were on top of not only the navigation and the weather, but also the ATC situation and the airplanes health? And how do we stay on top of the divert question, constantly knowing where we want to go in an emergency? Lets take a look at a hypothetical flight for the answers.

Setting The Stage
Your Commander 114B is in good shape, young for its age. With a fresh annual and full tanks, youre ready for the planned 500-nm business trip to meet your client and seal the deal.

But thats four hours from now, so you have about 25 extra minutes. With full fuel, you have an hour and a half fuel reserve. Youre relatively light, too-its just you, plus your overnight bag. Your preflight briefing reveals there are no Notams or TFRs posing a major impact along your route, or at the destination. The only available pilot reports including winds aloft data are hours old, but the forecast says things look pretty good. Theres a warm front coming in along the route, but it shouldnt arrive before you pass

hrough. While en route, there are some 18 suitable airports in gliding range, within 12 miles either side of the proposed route. Of course, theyre not all available to you throughout the flight.

After a standard five-minute preflight with your familiar bird, you find the hangar door is stuck. A sweaty and messy 20 minutes later, the prop is turning and youre calling for clearance, a few minutes behind schedule. Thats okay, though, because you can cruise at 157 instead of 150, arrive on time, and still have legal reserves.

Takeoff is followed by a routine departure and climb to altitude, and the Commander easily transitions to a fast cruise. Youre burning just shy of 16 gph instead of the usual 13.5, but you have plenty of fuel, so theres no problem.

Meanwhile, the GPS is showing the winds have picked up a little; while it was calm at takeoff, now theres a five-knot headwind component. The hangar snafu coupled with the increased winds mean youre going to be a little late, but theres not much you can do about it. As good as it is, your airplane hits a drag wall at around 160; no matter how much more fuel is burned, it wont go much faster than that. At 16 gph, youre down to about 49 minutes reserve as it is. Hmmm.

Blowin in the Wind

At this point, some faint alarms should be going off. For one, the stuck hangar door and ensuing delay, plus the increased headwind, probably are going to make us late. Better late than never, though.

Think through the next step: Your plan is going to have to change a little, since its likely you wont have the planned fuel reserve once you arrive at your destination. Has this change opened up new alternates on one side of the planned flight path and closed options on the other? Where are those airports? Which ones have runways of 3000 feet and better? Which have fuel?

When we first encountered headwinds, we recalculated fuel and reserves to the destination. Thats fine; but if the headwinds have just started, think: Are they likely to remain the same, or increase? Ask yourself: Whats the trend here? All of a sudden the wind has increased from zero to 10 kts in 10 minutes. Might there be a good chance theyll go to 20, or 30, before long? What would that mean for our reserves? What would a change of altitude do

for us, and how long will it take us to get clearance? What if we guessed wrong (or the reports are unreliable)? How fast can we execute the next plan-and how has that plan changed, since we considered it? In this case, theres no need to recalculate fuel; you still have plenty in reserve. So far.

What else can happen, especially since the wind forecast is blown? Well, since that generally means the approaching front is moving faster than forecast, and since fast-moving fronts can spawn storms, you now have something else to think about.

If storms appear, are you thinking about where theyre likely to be in relation to where you are, where youll be, or both? Are the storms moving in a straight line? Are you heading toward them, away from them or paralleling them? Can a different route put some distance between you and them, and also open up some new alternates? Do we need to locate some more approach plates, close some others? When do we call ATC?

A few minutes later, the headwinds have increased to 15 kts and we cant make the destination on time, no matter how hard we flog this beast. In fact, to be legal, we may have to go to an alternate. Where are those charts? Oh, shoot-the nearest ILS-equipped alternate upwind of you is only 100 nm from the destination.

Reshuffle the approach plates; put the original destination on top. Stow some alternates; retrieve the old alternates. Check the fuel. Youll still make it, a little later than we thought, but still reasonable.

But wait: A lower groundspeed means well be flying into that front, and spending more time in it, rather than landing before it comes through. Well be late, but at the right airport. Thats okay. The wind has picked up to 40 knots, but its quartering, from 30 degrees to the left. Plenty of fuel remaining, and just an hour to go, even at this low groundspeed.

“Altitude!” A clear but annoying voice comes over the headset. What

the…? Oh-Georges altitude hold function has taken a vacation. Gotta climb. Only 100 knots groundspeed in the climb. Thats really slow.

Time to troubleshoot the autopilot: Push the circuit breaker in; it pops out again. Once is enough-if that doesnt fix it, theres really nothing you can do about it until youre back on the ground. But, of course, the malfunction has tripped the breaker powering the entire autopilot, not just the altitude hold. Since George isnt helping, youve drifted a bit off course in the bargain. Time to call ATC and apologize. No emergency; everythings fine, just a little slow, a little later arriving.

By this time, the ride is getting bumpier; youre tired of this and feeling it. The sun is down and the winds have picked up even more. You get the current winds aloft, and opt to go higher. Another call; more climbing. You just realized that the only ILS-equipped airport still within fuel range is your original destination. Nice job, Sherlock.

After a few more uncertain miles, its apparent that all will be fine. Youre late, but starting your letdown to the destination. Soon, the airports in striking distance; the ride has smoothed out; youre even enjoying hand-flying again. You land with only 20 minutes fuel. What were you thinking?

Though nobody caught you, did you learn anything? At first glance, this might not be a big deal: You made the destination and you still had some gas. On examination, though, you flirted with disaster from the moment you got in a hurry. The hangar door stuck, and it took a few minutes to fix it and get the airplane out. You were rushed, so you relied on the line boys judgment of when the tanks were full. What if he had been in a hurry, too, and not quite topped you off?

What if the autopilot problem had been just the first indication of a larger problem? What options would you have been left with? Since you didnt head for the first suitable airport when you started finding trouble, by definition you continued flying into deeper trouble, eliminating safer options as you went.

Your normal routine was interrupted before takeoff. Your initial assessment told you that there was a lot more gas than youd need and that you could fly faster, make the appointment and still have safety margins. At each step of the journey, you lost a little margin; not anticipating the growing headwinds limited your diversion choices and clouded your planning. When you finally discovered the autopilot problem, you were behind the situation, yet you opted for the goal, rather than the safety of the flight. (Since you had no passengers, perhaps you can justify to yourself being more reckless than otherwise; but youre worth something, too!)

With the final need to climb and get back on course, your piloting senses came back on line. Maybe it was the hand-flying, or maybe you temporarily forgot about the deal that was waiting for you on the ground-but you looked at all the problems-worsening weather, lower fuel reserves-and made a decision to fly the airplane. That was a good thing. A little late, but a good thing! You made it-but at just about every opportunity, you did the wrong thing. Though it may indeed be better to be lucky than good (as it was on this flight), if youre good, you wont need so much to be lucky-and at least you can control how good you are, while being lucky requires…luck!

In this case, being good required knowing when to change the mission.

Tim Kern is a Florida-based freelance writer and editor who holds a Private certificate for airplanes.