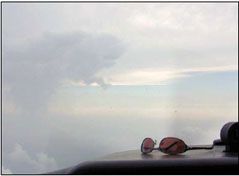 Flying a Baron 58P at Flight Level 250 some time ago, it occurred to me that there is no federal requirement for training in this pressurized, turbocharged twin beyond the Multiengine-Instrument ticket I earned years before in a 150-hp Piper Apache. Later, in unpressurized, turbocharged airplanes I was regularly flying at 20,000 feet using supplemental oxygen, and giving the only checkout new owners of similar airplanes would likely get in flight “up there.”

Eventually it came to me that operations near and in the flight levels have several significant and subtle differences from altitudes where most of us fly, differences that can range from nuisance to deadly hazard. What are those hazards, what can we do to mitigate them and what does the FAA have to say about any of this?

As more general aviation pilots began flying in the flight levels (above 18,000 feet in standard conditions) the FAA took notice. A string of then-controversial mishaps in Piper Malibus may have prompted introduction of the high altitude endorsement in the early 1990s. Recognition that a new generation of personal pilots, many without military or professional training, was operating at high altitude is likely an even bigger factor in the rules development.

The FARs requirements apply, however, only to aircraft that are both pressurized and certified for flight above FL250. Many airplanes-including the pressurized Baron-do not meet both criteria because the rules for certifying airplanes above FL250 make it expedient for many companies to arbitrarily limit their products to that altitude. Not pressurized and/or no approval above FL250? No high altitude endorsement is required.

In the years since the high altitude endorsement was introduced, weve seen a true revolution in lightplane operations. This is epitomized by Cirrus recent announcement of a turbocharged SR22 option, a type often sold to very low-time pilots. Too, greater numbers of single-engine aircraft are being fitted with turbochargers and flown higher than has been the norm for decades. Pilots with little or no formal training can fly these airplanes in the unique and unforgiving altitudes that require supplemental oxygen and, if high enough, include a transition to flight-level flying.

To get our arms around altitude-based risk management we should consider flight in two regimes, each with unique pilot responsibilities: “oxygen altitudes”-from 12,500 to 18,000 feet, and the flight levels-at and above FL180

To meet the demands of high altitude flight I propose this voluntary High Altitude Training (HAT) for pilots who fly above 12,500 feet:

As air thins, indicated airspeed decreases, even as true airspeed may increase. Lower indicated airspeed translates into less air flowing over stabilizers and control surfaces. Consequently, airplanes become less stable at higher altitudes. This is not too much of a factor in most turbocharged airplanes which, because the weight of turbo equipment tends to place their center of gravity far forward, tends to make them more stable than non-turbod airplanes.

The effect is not very noticeable until indicated airspeed falls to the low 140- to high 130-knot range. Even so, its not a major factor with many airplane types. It is harder, however, to hand-fly with precision above 12,500 to 15,000 feet, and autopilots may “hunt” a little more as well. As a result, the training objective is to hand-fly the airplane to the standards of the pilot certificates and ratings you hold at oxygen altitudes and be familiar with the characteristics of your autopilot at these altitudes.

One benefit of flight at oxygen altitudes is the ability to avoid some hazardous weather. Clouds at these altitudes, however, may present a risk of ice, even in summer, and clouds lofted to these heights often do so as a result of lifting action that creates strong turbulence. Flying at oxygen altitudes often gets you above the general murk so you can see build-ups from dozens of miles away, but its generally wise to deviate around cumulus clouds that have reached these heights. Another oft-touted benefit of oxygen altitude flight is the ability to fly over some hazards, such as an ice-laden undercast or extensive areas of low IFR conditions.

Consider, however, that unforeseen circumstances may force you to descend into the weather. “Always leave yourself an out” means down also-dont hem yourself into a position where you cannot descend and land without exceeding your capabilities or those of the airplane. The training objective here is to recognize oxygen-altitude weather hazards, regardless of season, and evaluate your choice of altitude and route from the standpoint of an unplanned descent and landing.

Temperature management can become a balancing act between horsepower, fuel pressure and available cooling air. Climbing with the fuel boost pump on (to increase fuel pressure, and therefore raise its boiling point) and step climbs (intermediate level-offs to allow the engine to cool with higher air flows) may become part of your oxygen-altitudes skill set. The training objective: Learn the special engine temperature management skills necessary when flying in dramatically reduced air pressure.

Knowing when to use supplemental oxygen, though, is only part of the story. You must know how much oxygen to use, how to manage and monitor delivery equipment and flow rates, and what to do in the event of an oxygen anomaly when flying at oxygen altitudes.

Its imperative that you understand your symptoms of oxygen deprivation-hypoxia. You must also be conversant in oxygen bottle servicing and inspection requirements. Bottles must be filled slowly, over half an hour or more, to get completely filled. If filled too rapidly, the oxygen heats by compression in the bottle, showing artificially high on the bottles capacity gauge until the bottle cools and O2 levels suddenly “drop” in flight. Most aircraft-certified O2 bottles must also be removed and hydrostatically tested every three to five years-check with the bottles manufacturer for the inspection interval that applies to your equipment.

The training objective, in addition to knowing when to use supplemental oxygen, is to know how to use the equipment, including setting the regulator for necessary flow, servicing the bottle and bottle inspection requirements.

Into the Flight Levels

Theres an invisible yet palpable line that separates personal aviation from the realm of professionals. Although there are serious aircraft and pilot considerations at oxygen altitudes below this line, the actions necessary and the threats implied by crossing this horizontal border are numerous. The line exists at a pressure altitude of 18,000 feet. Above this line are the flight levels.

In addition to all the considerations for flying at oxygen altitudes, flight level flying drives these suggestions for pilot education:

Pilot actions: The flight levels constitute Class A airspace. All operations in Class A airspace must be conducted under instrument flight rules, in a properly equipped airplane flown by a rated and current pilot-in-command on an IFR flight plan and clearance.

When climbing through FL180, the altimeter must be set to standard pressure-29.92 inches/1013.2 hectoPascals-and when descending through FL180 it must be reset to the local setting. Victor Airways cease to exist above FL180, replaced with charted Jet Routes on High-Altitude En Route Charts. “Flight Watch,” the frequency for in-flight weather updates and filing pilot reports, is no longer a single frequency; instead it is a geographically distinct frequency found on the back of the charts. Training objective: Become familiar with pertinent charts, high-altitude navigation and Class A airspace requirements.

If the airplane is less stable and responsive at oxygen altitudes, expect the effect to be even more pronounced in the flight levels. Unless specifically programmed for high-altitude flight, autopilots may be less precise here for the same reason. The training objective is to become familiar with hand-flying “feel” and autopilot responsiveness at progressively higher flight levels.

Another issue exists for the turbocharged-engine operator in the flight levels: “bootstrapping.” This term describes the relationship between manifold pressure, propeller speed and fuel flow at and above the engines critical altitude, or where the turbos wastegate is fully closed. Above critical altitude, the engine cannot automatically adjust for changes in mass airflow into the induction system or outward through the exhaust system across the turbocharger.

Any change in indicated airspeed, propeller speed or fuel flow will cause the manifold pressure to “hunt” and, in some cases, vary wildly to the point of potential damage. Pitch attitudes, propeller speed changes and mixture control adjustments must all be made very carefully to maintain precise engine control. Some engine types and even individual engines are more prone to bootstrapping than others, so proceed very carefully until youre aware of the characteristics of the engine(s) you fly.

Should an engine quit at altitude you may have to descend into much thicker air before it will restart. Simply retarding the throttle quickly (or allowing manifold pressure to drop through bootstrapping) can cause an engine failure in the flight levels. The Pilots Operating Handbook (POH) and/or engine operators guide should contain advice for restarting an engine that quits in the Flight Levels. Training objectives include practicing engine management in the flight levels as well as procedures for recovering a bootstrapping event and engine failures at altitude.

Where oxygen altitude flight is hazardous with exposure over longer periods of time, flight level flying presents time-critical physiological hazards. Other pressure-related issues also threaten at these altitudes. Its vital that pilots flying at these heights experience high-altitude physiological training (see sidebar on page 21). The training objective here is to complete high-altitude physiological training, including an “altitude chamber” ride, before acting as PIC in the flight levels.

To escape a hypoxia scenario, as well as other emergencies that might occur in the flight levels, pilots must be familiar with the optimal means of getting to lower altitudes in a hurry. Training should include reviewing and practicing emergency descent procedures.

Flight at oxygen altitudes and in the flight levels provides dramatic increases in aircraft cruise performance, as well as many more options for avoiding hazardous weather. The environment at these altitudes, however, also presents greater operational and physiological risks. As more and more light airplanes are equipped to fly at these heights, a greater percentage of pilots coming up through the general aviation ranks-without formal high-altitude training-benefit from the advantages but expose themselves and their passengers to the risk of high-altitude flight. To date, the FAA requires no special training unless the airplane is both pressurized and certified for flight above 25,000 feet. Its up to individual pilots to make a special effort to equip and prepare themselves for high altitude flying.