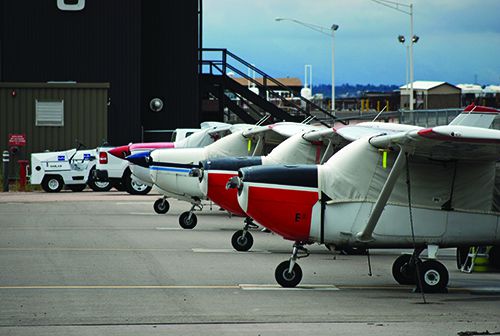 I don’t know about you, but I haven’t been flying as much as I normally do this time of year. The reasons are many, but the bottom line is I’m not getting airborne as much as I used to. I suspect there are more pilots like me who, among other things, might not have anywhere to go with all the business closures in effect at popular destinations.

One outcome is that airports, FBOs and airspace aren’t as crowded right now as they might otherwise be. Although there are signs that the airlines are starting to recover and add back flights they discontinued, other metrics like reduced control tower operating hours demonstrate that demand for air transportation remains soft. That translates into fewer overall operations in the airspace even as some operations like cargo, corporate and charters may be expanding.

Without as much traffic as normal, it’s easy to think we’re all alone out there when bouncing around the local area or actually going somewhere. Getting a clearance to deviate around weather might be easier than it otherwise would be since there’s less traffic to pose a potential conflict. Where you might be number four for the airport a year ago, today you might not see any delay at all. That can lead us to not pay as much attention to various tasks like looking for traffic or even cut a few corners when it comes to our flight planning. In other words, the relative lack of activity can lead us to become complacent. That would be bad.

We need to resist that temptation, myself included. The fact is that the many factors posing risk to our operations haven’t gone away. Weather is still weather, and airplanes still don’t fly well with air in their tanks, to pick two examples. And we’re likely not as proficient as we might otherwise be, since it’s more difficult to schedule an instructor, and training/practice flights aren’t as productive when there’s no one sitting beside us to apply peer pressure and critique our performance.

The cure for complacency in the cockpit is the same as it always has been: apply risk management techniques and the resulting safety strategies to your flight operations. Remain focused on continued improvement and don’t rely on past successes. Convince yourself that nothing has changed, because it hasn’t: The same risks that we’ve always faced are still present.